Ever wondered how you can look like you’re always en route to a rave? The only way to achieve that elusive look is with false eyelashes with LEDs built into them (duh). And if you thought LED eyelashes are a total pipe dream, you obviously haven’t come across f.lashes (pronounced “fuh-lashes” because they make you go “What the fuh is this”). The Arduino-based wearables have crossed their Kickstarter funding goal with more than three weeks left in the campaign, and even earned the crowdfunding site’s ‘Project We Love’ badge.

One reason for the Kickstarter success seems to be that f.lashes are not just luminous, but also interactive and diverse in their own way. There are five lighting patterns for users to choose from: Liquid Pour, Twilight Sparkle, Hyper Burst, Knight Riding, and Endless Winks. Each of those modes makes the LED lights behave differently. There are also a few color options, including red, yellow, green, blue, white and pink. While each pair of f.lashes can only exhibit one color among those, they all come preset with all of the lighting options. So if you’re done sporting red and want the green ones next, you’d have to buy another pair of the lashes.

The interactive aspect of the wearable comes out in the way it detects motion. The LEDs respond to movements such as dancing, jumping or even posing for selfies, apparently. Various effects are triggered based on what you do. Tilting your head one way makes the lights move in that direction, while jumping makes them brighter.

Flashy as they are, the interactive LED eyelashes are made up of a few simple electronic components. There’s a controller, which dictates the behavior of the LEDs using inputs from a motion sensor. There’s a 3V coin battery to power the setup, similar to what you’d see being used in a wrist watch. Then there are the LED eyelashes themselves, connected to the controller using thin wire. 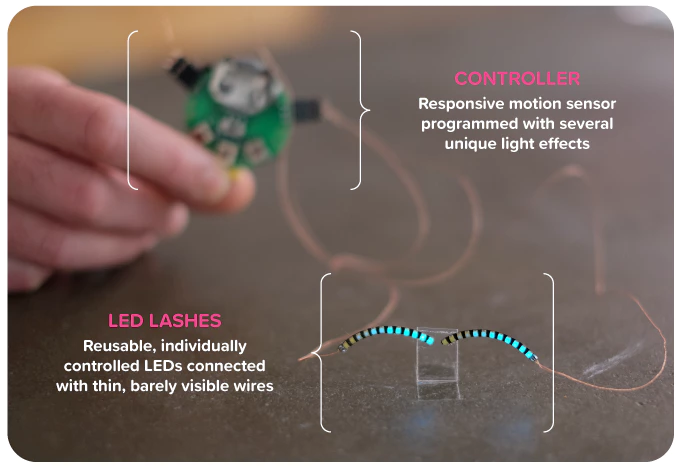 Getting the LED eyelashes on seems to be a bit of a tedious process, but the makers claim it only takes a minute. First, you insert a battery in the slot on the controller and connect the lashes to it using wire. Then you clip the controller onto the back of your head, so the fake lashes can reach their spot over your eyes while still being connected to the controller. Finally, you stick the false lashes on using lash adhesive. Then you take them off before anyone finds out what just happened.

f.lashes has raised $74,000 on Kickstarter after setting a $40,000 goal. A $40 pledge lands you one controller and one pair of lashes, the color of which you will be able to pick once the campaign comes to a close on July 21. Deliveries are expected to start only by January 2018, so you’ll have to party less fabulously until that happens.