Like crocodiles or Nickelback’s music, couches haven’t “evolved” a whole lot in some time. And they don’t really need to – they’re pretty great just the way they are. That being said, there are always upgrades out there you don’t know you need until someone puts it right under your nose (or ass), and ImmerSit – which I like to think of as steroids for couches – may just be one of them.

ImmerSit is a plug-and-play device that raises the bar for what we’ve come to expect from furniture, offering users a more immersive way to consume and engage with media. It does so with four little pads that sit at the bottom of any couch or chair on which you may be perched while watching a movie or gaming. The articulated pads house motors which are able to vibrate, raise/lower, or laterally move the seat in response to what’s happening on screen – it’s kind of like the 4D cinematic experience brought straight into your living room (minus the annoying water sprays and clouds of smoke).

Immersit works with any form of furniture that stands on four feet, so that includes chairs, beds, and other items on which you may sit/lie/crouch.

You start by simply sticking each pad under each of the four legs of the furniture unit. The entire system then needs to be connected to your media device (TV/computer/VR headset etc), at which point a bridge in the centre of the array takes over and dictates the actions executed by each of the four pads. The bridge having control means that each of the pads can move independently, so it’s able to raise just one part of the couch or move it from side-to-side easily. 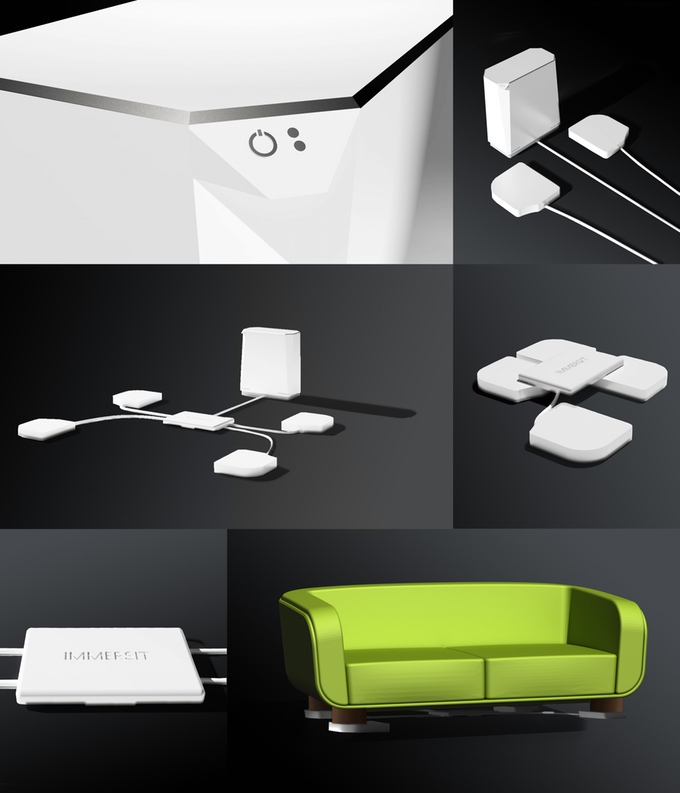 Currently, the folks at ImmerSit need to encode different media one by one before the pads know how to respond at different points of a game or movie. This means that while your couch will likely respond in sync with the action in the latest Fast & Furious movie or Modern Combat right out of the box, it may be a while before it’s able to do the same with Jurassic Park and Halo. The goal is to make the technology advanced enough that it’s able to discern the nature of events in a movie or game in real-time.

ImmerSit was among the startups picked to be a part of CES 2016 this year. Being part of the event helped them gain traction in the build-up to launching their KickStarter campaign, which has almost doubled its funding goal of about $120K with two weeks still to go. Based on the prices they’re giving out to backers, Immersit Motion looks like it will end up retailing for somewhere around $2,000.