The fear of needles and injections is called trypanophobia (and not “being a big fucking baby,” like I was told). For the 10-or-so percent of humans who are trypanophobic and the rest of us who won’t admit to it, there’s good news. The folks at UC Berkeley have a proof-of-concept of an orally administered vaccine, and it doesn’t require the use of needles. Instead, all you need to do is press it against the inside of your cheek.

MucoJet is a 15-by-7mm plastic device of a cylindrical shape. It has two compartments. The outer one holds 250ml of water. Inside, the other compartment has a plastic membrane separating two reservoirs. The vaccine reservoir holds the disease-fighting vaccine solution and has a piston at one end. Also in there is a chemical propellant. Why does anything other than a rocket or IED require chemical propellant? Because of the mucosal layer.

The mucosal layer is a membrane that lines the inside of the mouth. It covers the buccal region, a part of the cheek that is rich in immune cells. Traditional immunization has ignored the immune-cell-rich buccal region because the mucosal layer can be tough to penetrate. The MucoJet solves that problem with a delivery mechanism that produces a high-pressure liquid stream capable of breaching the mucosal layer. Basically, the piston and propellant create enough pressure to ensure that nothing gets between the vaccine’s payload and the immune cells in the mouth.

So far, tests conducted using MucoJet have shown that animals respond well to the oral vaccine. In one particular experiment conducted on pigs, the device outperformed a dropper administering a protein by over eight times in terms of delivery volume. Researchers also found that increasing the pressure of the vaccine jet leads to a more efficient delivery of the vaccine solution. 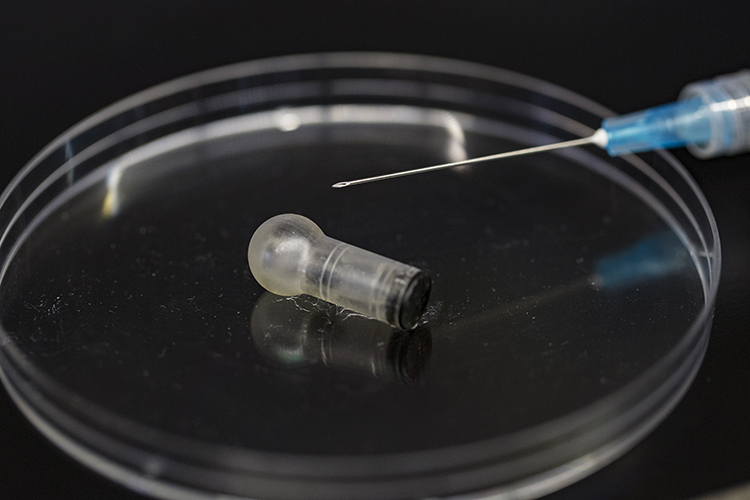 There are benefits to MucoJet outside of the fact that it doesn’t involve needles and pain. Prime among those is that it makes the assistance of a trained medical professional unnecessary. No needles means no need to worry about bleeding or infections. The vaccine can simply be self-administered, which apart from convenience will shave a significant amount off of medical bills.

Versatility is an important upside of the device. According to UC Berkeley Bioengineering professor Dorian Liepmann, the vaccination could be concealed in something as unintimidating as a lollipop. As long as the vaccination has access to the inside of the mouth, it doesn’t matter in exactly what form it’s delivered. Additionally, the small form factor will make it easy to deploy vaccines to rural and other areas where access to medical assistance is limited.

Although most of us would like access to MucoJet today, it will be a while before clinical trials on humans kick off and the product is available to the general population. Until then, grit your teeth, look away, and convince yourself that the pain will only last for a second.