Until recently, I believed that there were only three things that everyone who drinks alcohol, casually or excessively, should own; a limitless credit card, a key-chain bottle opener that accidentally doubles as a house key, and a David Hasselhoff costume. No, not the Baywatch one. This one:

After having the opportunity to play around with a new gadget, I have officially added one more must-have to my list: a small, pocket-sized, Bluetooth breathalyzer—something you can always have with you to keep tabs on your intoxication levels, whether it be for immediate safety, personal awareness, or an objectively judged drinking game.

Using The Breathalyzer: Contrary To Popular Belief, The Smaller The Better

I recently spent a week with the WearSmith Alcohol Breath Tester in my pocket. Apparently, it’s the world’s smallest and lightest Bluetooth breathalyzer. 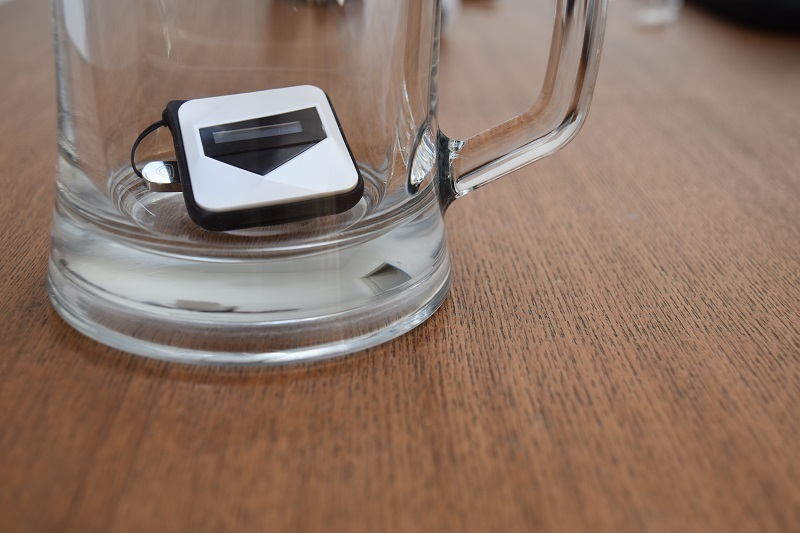 In terms of usage, there is nothing complicated going on. If you want to keep it low-tech, you could just press the button on the thing (there’s only one, and you think about the target market, that probably makes sense), wait until it shows you a few arrows, and then blow into it for 5 seconds. In no time, the device will display your intoxication level as either blood alcohol content percentage or breath alcohol content percentage. It also displays a smiley face if you’re below the legal limit and a frowny face if you’re rat-face shitcanned (or something in the middle). 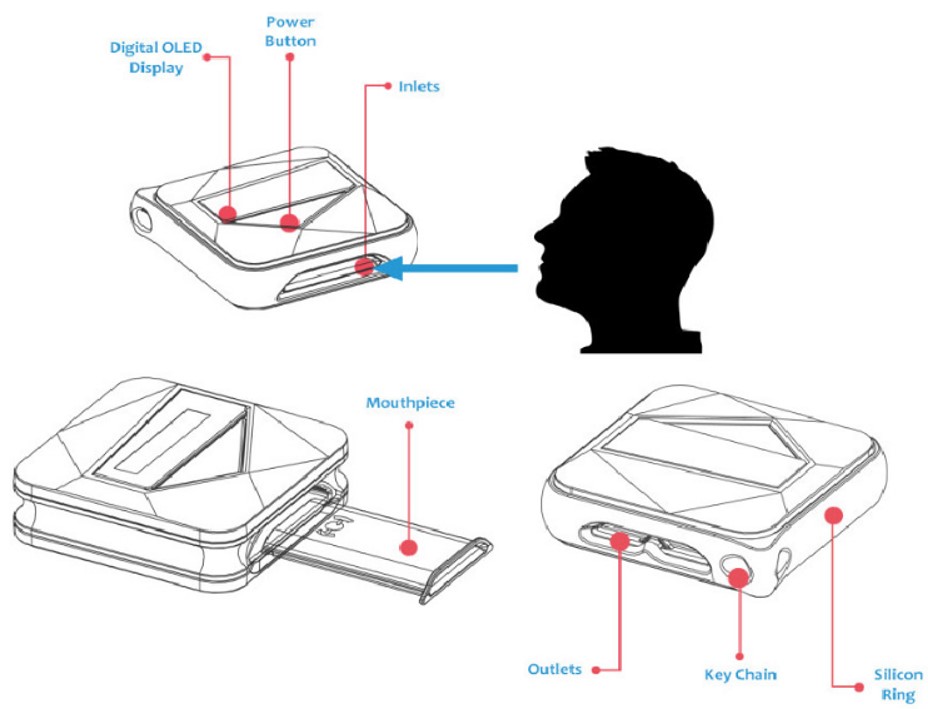 I think the companion app is where it gets really interesting; pair it with the breathalyzer and the experience is greatly enhanced. For one, you can set metric preferences—I only care about blood alcohol percentage—and configure your biological specs so that the experience is more personalized and more insightful. 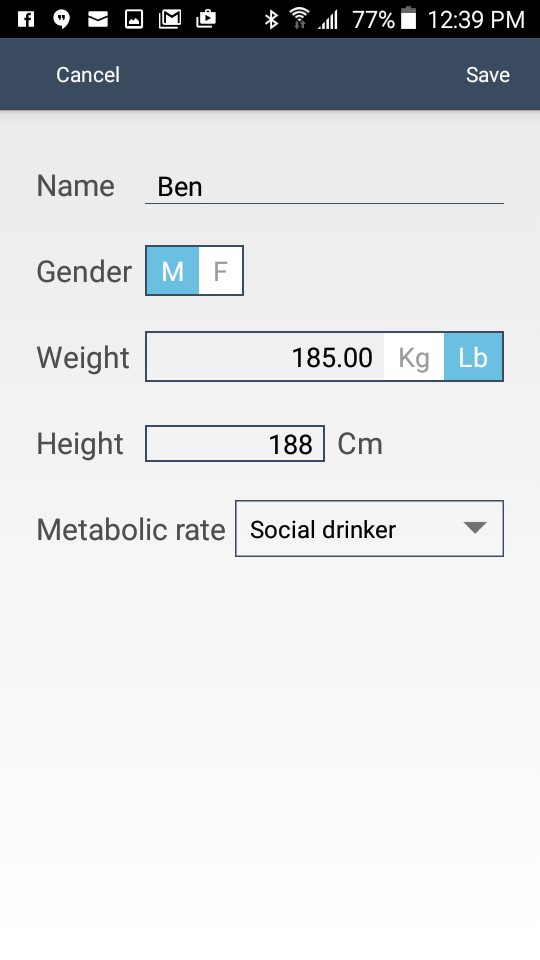 Then you go to the Start section of the app; it tells you to blow, so you blow. The results are tracked in real time, and it’s actually quite cool to watch (if you can still see at this point): 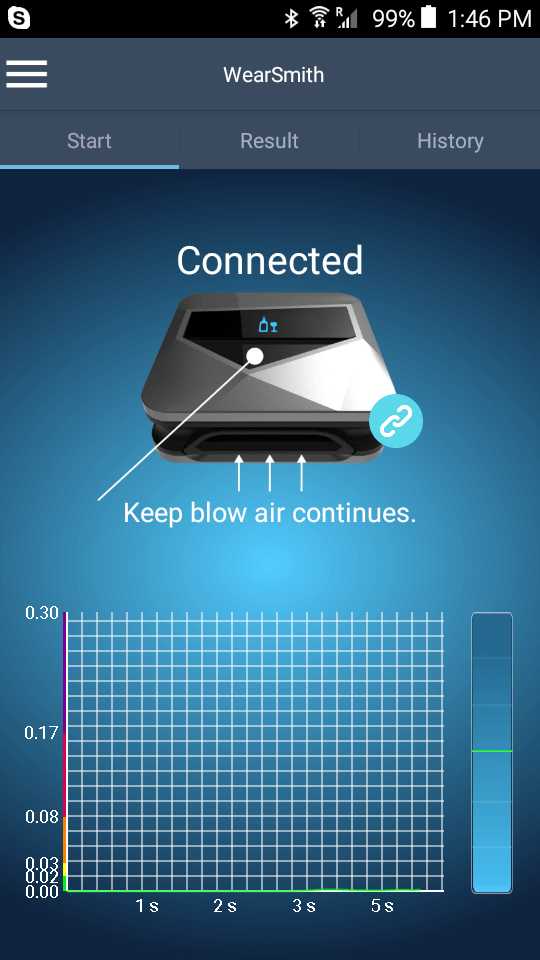 And don’t forget to follow the instructions on screen: “Keep blow air continues.” Hey, just because the software sounds drunker than you, that doesn’t mean it can’t be helpful.

Once you finish blowing (as unfamiliar as that may be for some), you get your results right away: intoxication level in your preferred measurement unit, a helpful bitmoji-style illustration of a budding alcoholic with varying facial expressions to match the results, and a countdown to sobriety based on the bio figures saved in your profile. 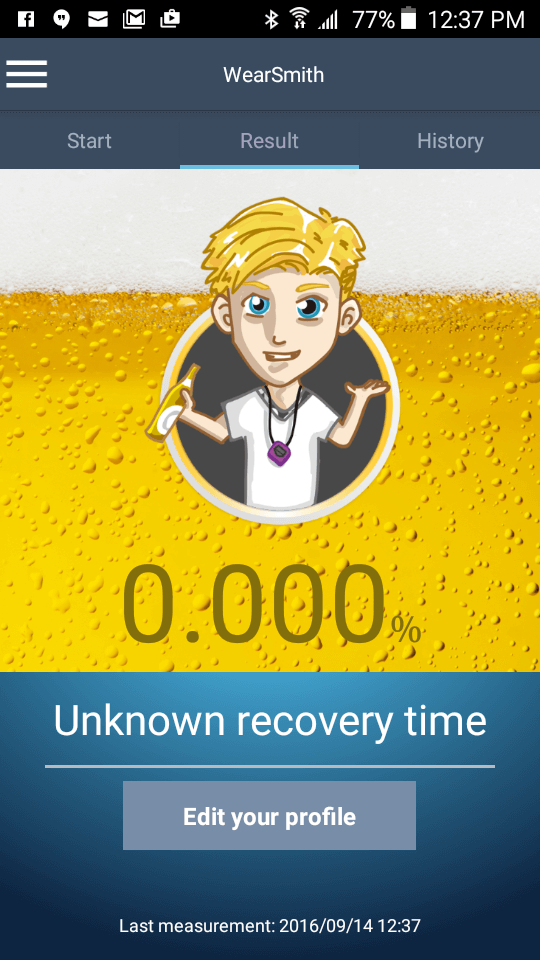 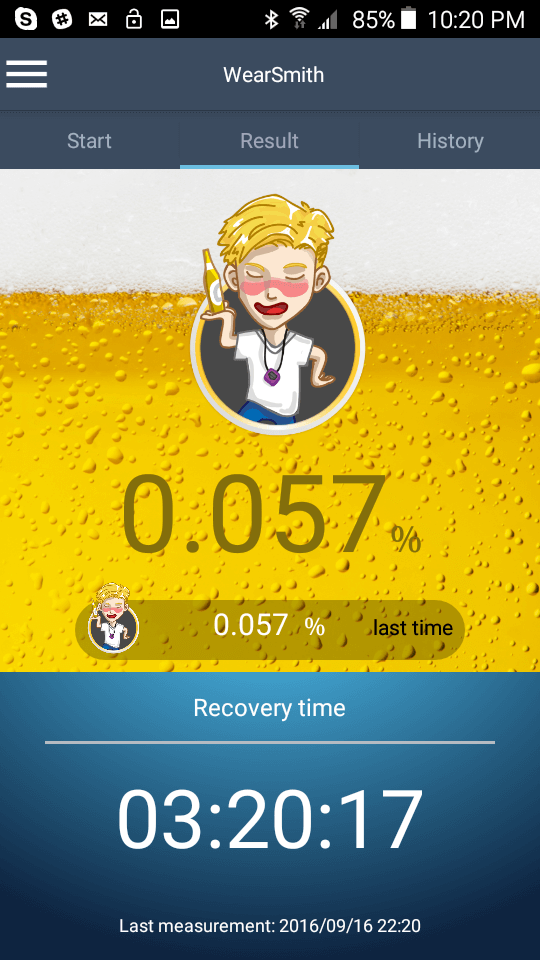 To avoid distraction, I left out my 0.225% reading that was taken after three Old Fashioned cocktails that I’m pretty sure could have been used to power a jet-ski.

The app even has an option to include a hotlink to an “emergency contact” contact record. So if you surprise yourself with a whopper of a BAC reading, calling your teetotaling ex to come scrape you out of a McDonald’s booth is just a click away. 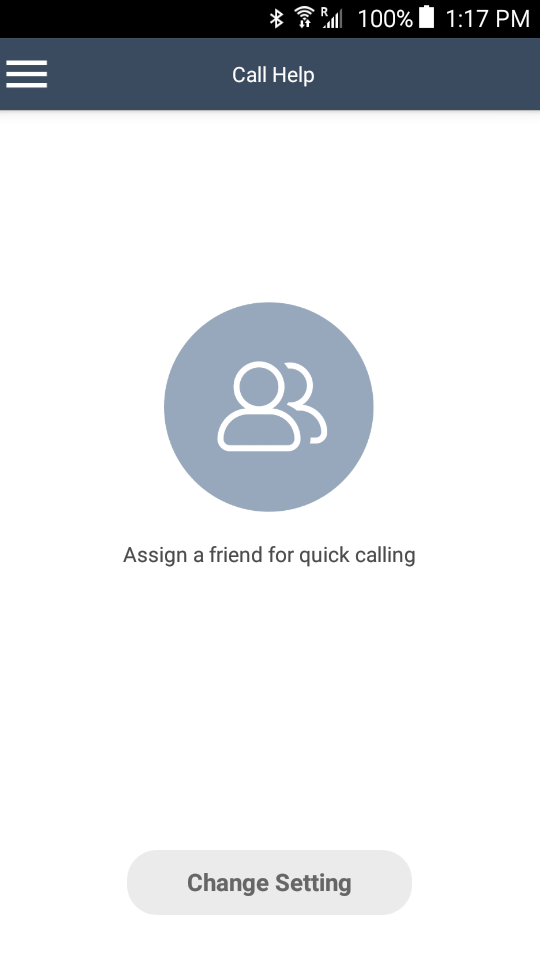 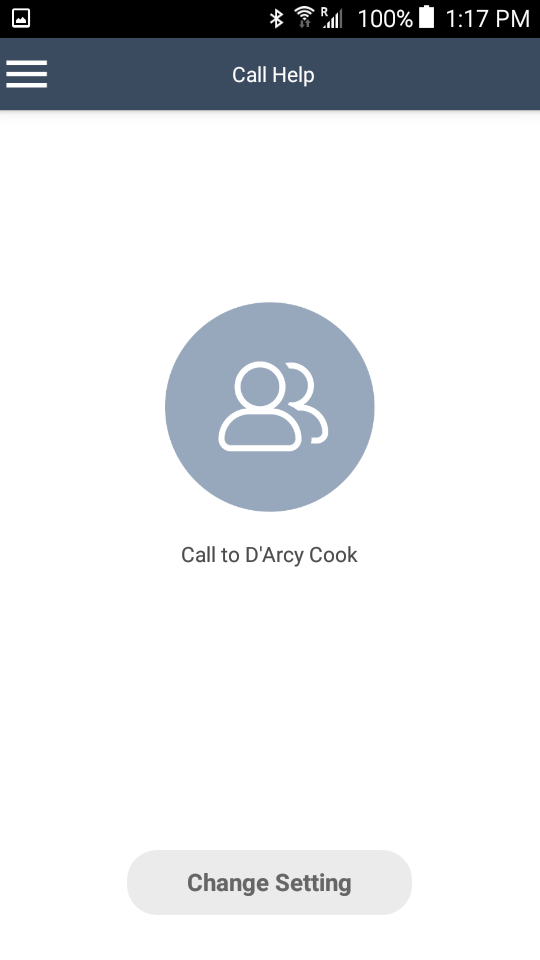 For whatever reason, the device’s Indiegogo campaign fell drastically short of its goal, raising only $4,765 of a requested $35,000. My guess is that part of the disappointment was due to some ineffective and/or mistimed marketing. As well, my guess is that part of the shortfall was due to a widespread instinct to buffer ourselves from our own unbecoming behavior, rather than intelligently manage it. Like when people don’t want to know how many calories were in that slice of cheesecake (it was probably about 350), or when we condition all our colleagues to start every professional criticism with, “You’re doing a great job—I really like where you’re going with this, but…” (you probably fucked up). We often act like we want to know, but when it comes time to swap pleasantries for precision, we don’t really want to know.

The other likely issue is that many people probably struggle, honestly or otherwise, to envision a consistent use case (“Hey, I’d never drive drunk, so why would I need one of these things?”). To me, that position is an oversimplification (at worst a defensive, selfish one) of the overall value offered by one of these things. I’m coming at it from a different angle; why wouldn’t I just have one? I only see upside to owning something like this.

Respecting The Breathalyzer: Me & You, Your Momma & Your Cousin Too

Let’s start with the obvious: if you have had a few drinks and you are planning to drive a motorized vehicle (not recommended, unless it’s a Go Kart at Six Flags), you have a reality check in your pocket. While it’s not preferred that you getting behind a wheel after a few drinks, it is legal and certainly less risky if you’ve been responsible about it, or you have the tolerance of Russian drifter. Might as well have access to some evidence either way.

There are benefits even when you’re not the subject of the concern. How many times has some twit tried to convince you that they’re “not that drunk” while they stare at their own nose and forget where they put their legs? If for no other reason than to stuff this thing in someone else’s mouth when they’re on the verge of destructive behavior—the facts can sometimes be effective discouragement—you have made a wise purchase.

Personally, my favorite thing about using this breathalyzer was the self-awareness and the experience of a real-time-data-driven perspective on how my body actually reacts to alcohol. I can say things like, “I’m pretty drunk,” or “I’m fine to drive,” or “What gets salsa out of underwear?”; and I can assume that just because I have been drinking alcohol for over 15 years, I know what gets me “drunk” and how long I need to sober up. But then there’s understanding the in-betweens and the stages; how everything shifts with fatigue, drink potency, velocity and other variables you start to actively appreciate in the face of true information.

It was very enlightening to know what blood alcohol percentages corresponded to my “Fuzzy-But-Fully-Functional” phase, my “Hugs-‘N’-Handjobs-For-All” window, and my, “English-Now-Eludes-Me” act. It was also very enlightening to see how disturbingly generous 0.08% actually is as a legal limit. An enlightenment that I’m sure was in play when two provinces in Canada recently implemented a Warn Range—drivers are penalized if caught driving a vehicle with BAC anywhere between 0.05% and 0.08%. 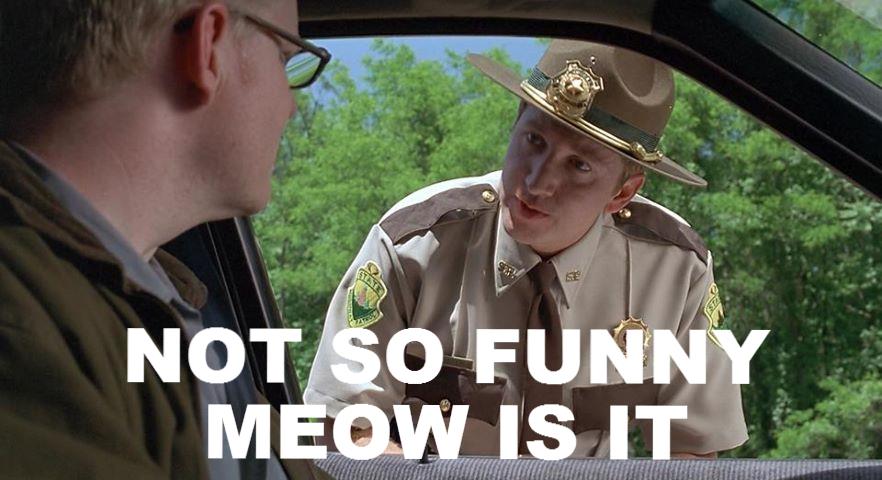 Not only is all this information a worthy wake-up call, but in a world of endless wearables, and a world where data-driven decision making is not only encouraged but expected, I consider this kind of information essential; to your health, to your self-awareness, to your character, and of course, to any fellow citizens you may encounter on the roads or barf on after intercourse.

A Future Full Of Options

A few months back we covered the future of alcohol-testing wearables. A contest was held by the National Institute on Alcohol Abuse and Alcoholism in which $200K was ultimately awarded to a device that reads your BAC by measuring the alcohol content in your sweat. That’s amazing and I’m excited about widespread integration of this technology (talk about a no-brainer for future Fitbits, and hell, maybe even smart clothing). In the meantime though, there is a lot to be said for a personal, portable, blow-to-know gadget. It’s not too difficult to get your hands on them either; besides the WearSmith product, there are other consumer options. At both practical and philosophical levels, I’m inclined to say that all the options are good options.