Our lives are hectic enough. Adding in extra stresses like new jobs, growing families, and more technological devices can spell disaster for organization. It’s easy to get sidetracked and lose touch with the essential tangible items we need to work, drive the kids to soccer practice, or pay the pizza delivery guy.

According to a study by esure home insurance, it appears that losing items like keys, wallets, and other common items we use on a regular basis is more common than we think. The study found that three-quarters of all lost items are in the home. They also noted that adults lose, on average, ten minutes of every day searching for these items. Those are ten minutes people can’t afford to give up when they’re already running late for work, school, or meetups.

So what’s the answer? In comes Pixie with a solution to a problem we all too commonly face.

Pixie Technology and the Location of Things

California-based company Pixie Technology was founded back in 2011 and has since received numerous rounds of funding for the development of their product. Today, their system of Bluetooth fobs and an augmented reality app enable users to more easily, quickly, and efficiently locate lost items.

Pixie took the idea of the Internet of Things (IoT), in which all devices connected to the Internet can communicate with one another, and evolved it into what Bassan-Eskenazi, CEO of Pixie Technology, describes as the Location of Things (LoT). He explained, “The magic and accuracy of Pixie is the highly advanced Location of Things platform that creates micro-mesh networks in which all Pixie Points continually signal and communicate their relative distance from one another.”

So, instead of relying on devices to do the talking, Pixie’s system relies on their fobs (known as “Pixie Points”) to communicate their distance and location from one another, similar to how GPS works.

The solution itself should be a simple enough one for users to grasp. There are three components:

A Need for a Better Lost and Found

According to Bassan-Eskenazi, “Pixie can be used to keep tabs on any valuable that tends to get lost or misplaced, including a child’s favorite toy, a tablet, keys, wallets or remotes. Additionally, we have some users finding Pixie useful in locating where their cat is hiding in the home.”

The only catch is that users have to remember to place one of their Pixie Points on the item they want to track down before it goes missing. Once this happens, however, the technology itself is incredibly powerful. Indoors, Pixie can locate items between 30 and 50 feet away, even if they’re hidden beneath other objects or in other rooms. Outdoors, Pixie works up to 150 feet. The app then gets users within inches of the tracked item.

Perhaps the most innovative piece of this technology is the Pixie Dust augmented reality aspect. Unlike other Bluetooth trackers like Tile’s Mate and Slim or PebbleBee, Pixie does not rely on metal detector-type beeps and radar to guide users towards their lost objects.

Think of the Pixie Dust app interface like a non-game version of Pokémon Go. When users turn the app on, they use the camera-type viewfinder to point them in the right direction. A colorful pixie dust overlay lands on top of the screen when the mobile device is pointed in the direction of the object. Tucked beneath pillows, hiding in other rooms, or accidentally dropped in the driveway, the Pixie Dust points users directly to their lost object. 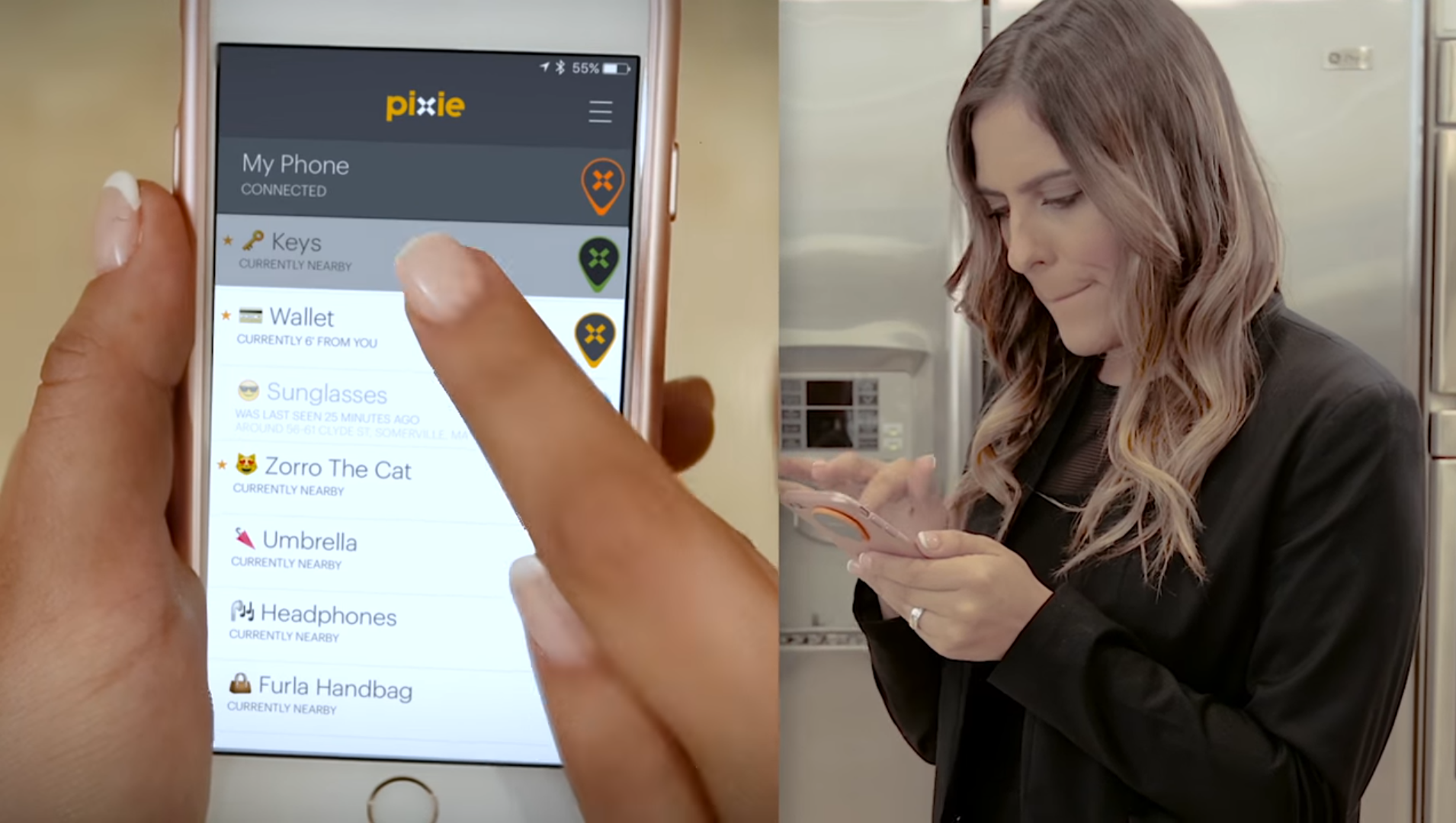 As Amir Bassan-Eskenazi explained: “Pixie was created to make living in a world of lost and misplaced items a thing of the past.”

With a growing need for technology that integrates with our current devices and improves the ease in which we go about our lives, it’ll be interesting to see where Pixie takes us next.