Katherine Krug’s best work is behind her. In fact, it’s behind a lot of people, because that’s where the posture-correcting device she created does its magic: over the lumbar spine in the back. Worn 15 minutes a day, BetterBack promises to help improve posture, alleviate back pains, and enhance overall health. It’s a proposition that’s appealed to thousands of people, who helped make Krug the first solo woman to breach the $1 million mark on Kickstarter. Now the second generation known as the BetterBack Therapy is on Kickstarter, and like it’s predecessor, is making its campaign goal look like child’s play.

How it All Began

Krug tells me she first designed the product to address her own nagging back problems. “Hunching over my laptop 12+ hours a day building my last company, I got terrible sciatica pain,” she recounts. The debilitating pain affected her ability to do something as simple as just sitting down. “I went on a long and expensive journey visiting doctors, trying all sorts of products and therapies, but I couldn’t find anything that just worked for me.”

Having found no comfort in existing remedies, Krug took things into her ownhands. “I started tinkering in my living room with a friend in Industrial Design grad school—the first version of the BetterBack knees were cut outs from the top of mega-sized protein bottles,” she says of the origins of the product. Five prototypes later–with help from professional industrial designers, doctors, therapists and dozens of beta testers–the first generation BetterBack was born.

The device is shaped like a brace that goes around the back with a strap that extends over the knees. The tension created by the strap pulls the brace into the back, giving the lumbar spine the support it needs. It’s also designed to stabilize the pelvis, which is an aspect of posture-correction that a lot of traditional back supports overlook.

Krug turned to Kickstarter to raise the funds that would help convert the final prototype into a commercial product. The campaign set a goal of $12,500, and offered BetterBack units starting at $49. It ended up raising a whopping $1.19 million when it wrapped up in mid 2015. With the support of those 16,000+ backers the campaign became one of the top 100 Kickstarter projects at the time. 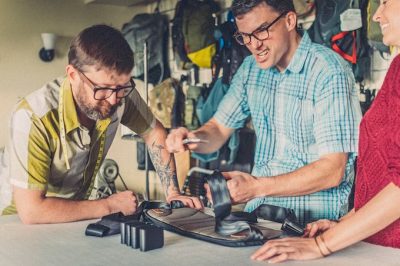 Krug attributes BetterBack’s success on Kickstarter to four main factors. The first two of the four deal with the product itself: “BetterBack is an innovative solution for a common problem (back pain will affect 4 out of every 5 people you know)” and “The price point is great — less than the cost of one visit to a chiropractor”. She then states the final two factors address how she marketed it: “Every single person I had every exchanged an email with in my life heard from me during the campaign. I also reached out to my LinkedIn, Facebook and phone contacts. The power of crowdfunding really is in the community.” and finishes by stating that “I never stopped optimizing our campaign page. Every day I was running experiments and tweaking layout, graphics and copy to try to boost conversion.”

Now, BetterBack is in its second generation, an upgrade that was inspired by input from the community. “I’ve spent the last year listening to the incredible feedback from our backers, developing the next generation: BetterBack Therapy,” Krug says. The Therapy offers a number of new features, including NASA memory foam padding, new types of sitting support, an additional size, and the ability to apply heat or ice for pain relief.

The BetterBack Therapy raised over $830,000 on Kickstarter  after having set a $12,500 goal. Units in the first shipment of the Therapy, deliveries of which begin in February, are priced $89. The second shipment comes out in April and is priced $59. Krug tells me the action will shift to Indiegogo once the Kickstarter campaign wraps up.

Apart from setting crowdfunding sites on fire, there’s a major portfolio expansion in the works. “2017 is the year we expand from BetterBack into Better Brands and develop new products that help people feel better and be better,” Krug reveals. And then of course, there will be more crowdfunding. “We start delivering BetterBack Therapy next month, and then it’s back to the lab gearing up for our next product launch and crowdfunding campaign!”