Your wireless phone charger may be cool and all, but it’s never going to be ‘potted plant charger’ cool. To get to that level of avant-garde phone-charging awesomeness, you’d need to hook yourself up with a Bioo Lite.

The Bioo Lite holds a potted plant – a living, breathing plant that produces oxygen and absorbs carbon dioxide like you’d expect it to. Then, once holding that plant, it uses the plant to generate enough electricity to replenish a smartphone battery with the byproducts of its natural photosynthesis.

Externally, the charger looks like an average ornamental garden pot. But at the surface of the soil you’ll find a USB port to which you can connect your phone’s USB cable. The USB port connects to conductive material that snakes through the soil into a reservoir held at the bottom of the pot.

The reservoir contains water and anaerobic bacteria. Byproducts of photosynthesis are expelled by the roots and channeled through a semipermeable membrane into the reservoir. There, they come in contact with the microorganisms, which act on them to produce electrons. There is a cathode and anode within the arrangement, so that’s how electricity is produced in the underbelly of the Bioo Lite. 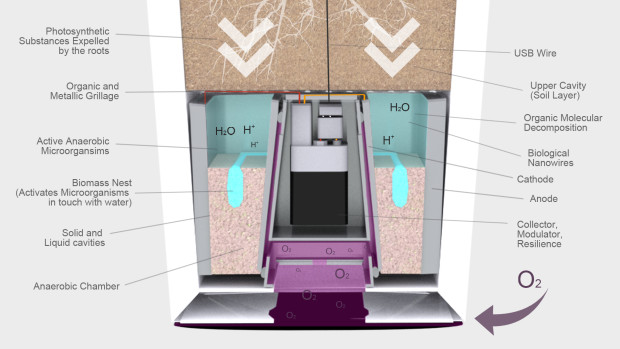 Through this rather elaborate process, the device is currently able to produce 3.5 volts. The team claims they are working on a new modulator that will help the final production version output 5V – that is the standard output for USB ports, making the Bioo Lite suitable for most personal electronic devices we use. At the moment, the Bioo Lite can apparently charge phones from nothing to full 2-3 times a day, which should be sufficient for most smartphone users.

Evidently it is the process of photosynthesis that is a prerequisite for the production of electricity, so it doesn’t matter what variety of fauna you grow in the pot – the arrangement should work just fine as long as you ensure a living plant is in it. However, the makers advise against using plants like cacti since the amount of electricity produced may not be as much as the amount you would get from leafy plants.

Bioo Lite comes to us courtesy Arkyne Technologies, a Spanish company that has projects in domains ranging from artificial intelligence to geo-localization. They’ve turned to IndieGogo to fund the first production run of this product. Though the device makes some tall claims, crowdfunders have responded with confidence rather than skepticism.

Bioo Lite has crushed their $17,000 goal by almost 200% with a month still left to go in the campaign. Early bird pledges have sold out, but a $110 pledge (not inclusive of shipping) gets you a single unit of the novel phone charger. If everything goes to plan, the device will start shipping December 2016. 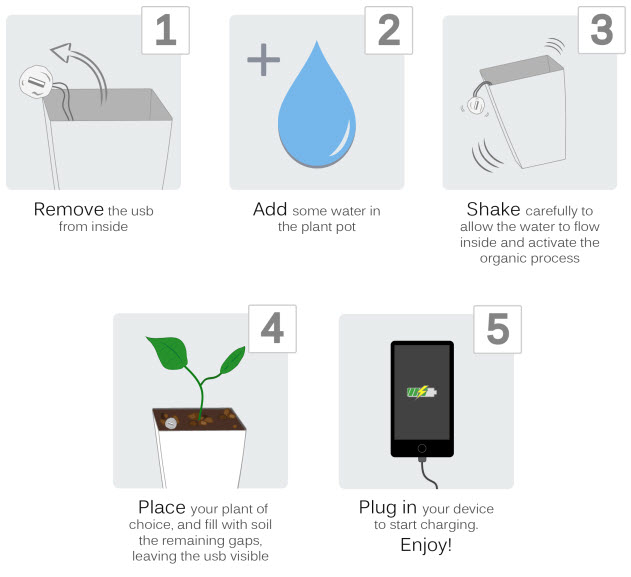