I’m about as good at telling a Cabernet Sauvignon from a Pinot Noir as I am at telling the Olsen twins apart, but that doesn’t change the fact that some people take their wine very seriously. A crisis that such people face often at the end of a night of drinking is the half-finished bottle of wine – that white (or red) elephant you can’t just leave out for fear of oxygen getting to it. There’s now a solution to that problem, and it’s way more high-tech than you’d imagine.

Kuvée is an Internet of Things startup, and the thing they’re putting the Internet in, is wine bottles. The wine bottles they make are Wi-Fi-compatible and come bearing a touchscreen. The best part about the bottles though, is that they preserve their payload well beyond its normal life expectancy: they help keep wine fresh for about 30 days after the bottle is uncorked.

The wine preserver system has two parts: a dispenser and a wine canister.

To get started, Kuvée’s 750ml wine canisters need to be inserted in the dispensers provided by them. The dispenser doesn’t use a cork, but still seals the wine in after the bottle has been opened. It manages to do this using a one-way valve coupled with an accelerometer; the arrangement allows wine to flow out when the bottle is tilted while ensuring that oxygen doesn’t rush in when it’s not.

In order for this system to work, you can only use Kuvée’s wine canisters. The startup has said that they’re collaborating with wineries to offer about 50 varieties of wine at launch; they’ve also promised to broaden their repertoire at regular intervals. Despite that, being locked into their ecosystem may be an issue for potential customers, especially those who like to try lesser-known wine varieties.

Coming back to the “smart” features of Kuvée’s wine bottles, the capacitive touchscreen on the dispenser displays information such as type, year, alcohol content etc. It also lets you know how many glasses worth of wine remains in the bottle and suggests foods that pair well with each variety. Once you’re through with a bottle, you can even order your next one straight off the screen on the side. 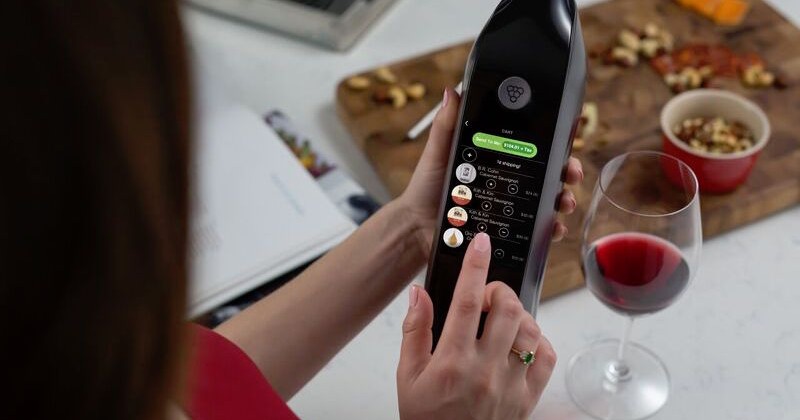 The jury is still out on whether Kuvée is a di-vine solution to a common problem or an excuse to hawk bloated technology.

On the one hand, the startup was panned on Product Hunt, and also got featured on the Internet Of Shit Twitter page – an account that roasts Internet of Things products.

One the other hand, Kuvée has strolled well past its Indiegogo funding goal with a month left to raise more funds. The campaign has raised over $105,000 – over 200%% of the $50,000 goal – with the help of 513 backers. The super early bird pledges have sold out, and you can now get the Kuvée smart bottle along with four wines for $199. Deliveries commence December 2016.

Whether you side with Kuvée’s Indiegogo backers or think it deserves your grapes of wrath, one thing is for certain: if you like startups, you like technology, and you like wine, you should give this product a quick peek. You should also check out Snapmunk’s video series Uncorked (shameless plug) – the general consensus is that it’s pretty great.