There are a kinds of get-around gadgets on the market today, from basic (flammable?) hoverboards to skateboards that want you to feel like you’re snowboarding on concrete. As cool as some of these existing toys might be, you have to imagine there is always some room for increased cool factor right? Oh, definitely. There’s a new take on the hoverboard out there called the ATOM FLIYE; it’s an all-terrain (and we mean, “all-terrain”) hoverboard-skateboard-hybrid with a big fat wheel in the middle of it. It’s currently trying to raise crowdfunding cash to make it to wide production. Hopefully it succeeds, because it looks awesome and we wanna ride one.

Unlike hover boards which rely on two wheels, the core of ATOM FLIYE is a single front, ultra-wide “vacuum tyre” that stretches 15 cm / 5.9 inches. It brings both cushion and stability and thanks to the deep treads, it can handle all kinds of off-roading. 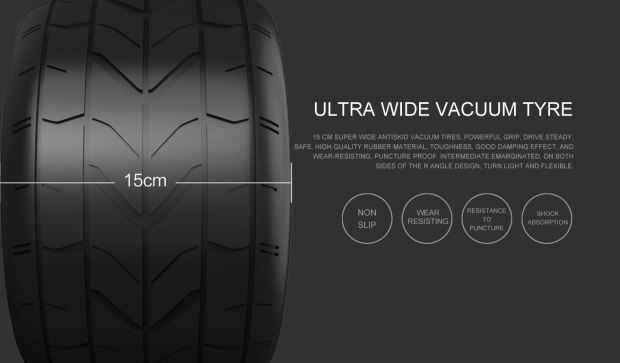 The water-resistant body also allows the board to be used in the rain and literally right through puddles, let alone a few pesky stairs or a dirt hill.

The companion app for ATOM FLIYE connects to the board via Bluetooth and provides numerous control functions; managing the anti-theft system and displaying exact speed, mileage, and remaining battery-life; it also checks the board’s overall condition so users know if it is safe to use. The rider can also use the app to drive, controlling speed, sensitivity, power and more.

The device has a weight limit of 250 lbs., can handle 12 degree slopes, and is designed travel up to 7.5 miles on one charge, depending on terrain.

So far, ATOM FLIYE has raised just over $8,000 towards their $50,000 goal, with about three weeks remaining in their Indiegogo campaign. Early bird pricing for the skateboard is $999 plus shipping. Backers are able to choose from four different colors: Ocean Blue, Silver Surfer, Pink Panther, and Black Panther. The estimated ship date is February 2017.

There’s a few other startups in the space trying to shake up the hoverboard & skateboard space. For example, there’s the Stary; a 11.6 lbs. electric skateboard made of carbon fiber and fiberglass to achieve speeds of up to 18.6 mph, and claim itself as the world’s lightest electric skateboard.  Another notable device in the space is Mellow; the world’s first mountable electric drive that turns any skateboard into a motorized one—similar to the GeoOrbital wheel that turns any bicycle into an eBike.

Although a novel concept, the success of the device, or any device in this space for that matter, is far from certain. While 2015 saw almost $1 billion in hoverboard sales in the US alone, things may not be looking up in 2016. Interest in “hoverboards” has been waning this year, as has Federal and corporate confidence in their safety; Amazon and Toys R’ US won’t even sell them at all anymore. Maybe the AATOM FLIYE can zip past all those problems…