Wearable technology has steadily begun to make inroads into many aspects of our daily lives. Want to know how well you slept last night? Your wristband will tell you. Want to know how many calories you burned or steps you took? Gyroscopes in nearly every mobile phone can feed that info to a myriad of fitness/health apps out on the market. What what about safety? A new Kickstarter campaign by Revolar launched in January is looking to develop a piece of wearable technology that allows the user to discreetly alert emergency contacts when they are in danger. 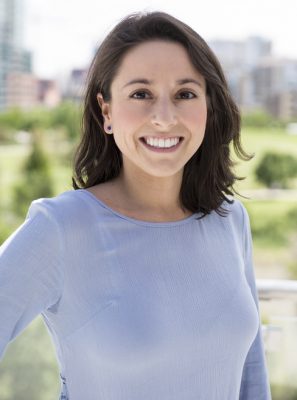 Jacqueline Ros is the Chief Executive Officer and Founder of Revolar.

Revolar was created in 2013 by its founder, Jacqueline Ros, after her sister was attacked twice before the age of 17. Ros found herself wishing that she could give her sister a “magic button” that she could push in the event of trouble so she could get help. Revolar is what she created. Ros initiated a Kickstarter campaign which has yielded more than $83,000 to create the product. Bluetooth technology is used to connect the device with the user’s phone and an app powers the back-end functionality.

Once the button on the Revolar device is pressed, an emergency alert message is sent to each person on your emergency contact list. The alert message lets your loved ones know that you need help, and even provides a GPS coordinate of your location. This information is updated every three minutes.

The contact information that you pre-program into your Revolar device is safe and secure, and can be changed and updated any time you wish. The app that allows you to program the device is free. Revolar is powered by a battery that will last several months to a year, depending on the amount of use it gets. There’s no need for charging or plugging it in. When the battery runs low, you simply replace it with a standard watch battery.