Up until recently, convenience was defined as being able to talk to your appliances to control them. Today however, that’s old news. Home automation is increasingly becoming more advanced, and while devices can’t yet read our minds, they’re getting pretty close. A startup called Intellithings is on the road to launching RoomMe, a patented smart home sensor that detects who has entered a room, syncs with smartphones and other smart home software, and leverages user data and customization to automatically adjust devices to serve preferences around things like temperature, lighting, entertainment and even security.

The list of other controllable devices, as you would imagine in the IoT world, is quite extensive; RoomMe can be used to control TVs, lights, thermostats, lamps, cameras, coffee makers, ceiling fans, smart outlets, and window blinds. In essence if it’s a HomeKit, Wink, Nest, SmartThings, or WeMo device, you’re good to go. There’s also iOS and Android SDKs in the works which will provide additional access to functionality for developers.

RoomMe can be activated in a few basic steps. First it’s mounted to the ceiling in any room. The sensor is then programmed to know which room it is located in. After that, the app controls the user’s smart devices–the ones linked via apps on their smartphone–using their preferences.

Since RoomMe is designed to support multiple profiles, it does have functionality to handle multiple individuals in the same room. With priority settings, users can determine whose preferences actually apply to devices and appliances when more than one person enters a space. There’s also the possibility of compromising. For example, a thermostat can be set to a “middle of the road” temperature when two people are in a room, and then change back to the target temperature later on.

As far as security goes, there’s no personal information required to use the device–all communication is done locally when possible–and RoomMe doesn’t accept commands from external devices.

RoomMe is sized 15.2 cm x 4.5 cm, is designed to be mounted on the ceiling, and has a battery life of 2.5-3 years with normal use. At the moment, the device only works with smartphones and tablets with Bluetooth 4.0 peripheral capabilities, such as Apple iPhones, tablets, and newer Android devices. 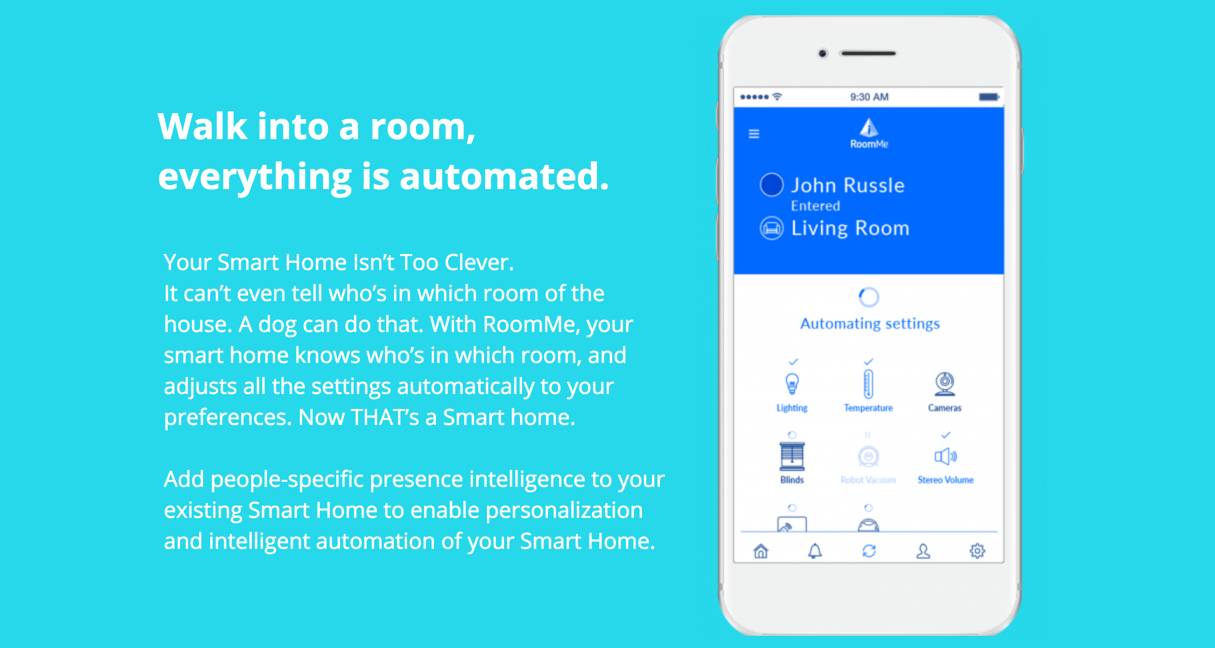 Earlier this year, the makers of RoomMe raised just over $40K via Indiegogo crowdfunding, most of the money coming through a single “Distribution Package” for $30K. The product has an estimated shipping date of May 2018, with pricing starting at $99 (16% off of expected retail).

The Founder and CEO of RoomMe, Oren Kotlicki, has over 15 years of experience in the smart home sector. His work experience includes leading a company known as Visonic to be the first manufacturer to offer smart, cloud, home solutions. The company was acquired by Tyco International in 2011, after which Kotlicki founded Intellithings.