With Twitter still stumbling, Snapchat riding high after its first day of public trading, and Reddit an ongoing enigma for shareholders, advertisers, and content creators (the three of them who aren’t paid shills, that is), I thought it was high time I broke down exactly what makes a social media platform really work.

Then I remembered that I don’t have the first fucking clue what makes any social media platform work. So I decided to take the easier route and dig up six social media failures we can all point and laugh at. Five of the six platforms that follow are already completely defunct—they might still technically be available, but they’ve been abandoned by users and developers alike if not completely shut down. The last is still trying to make a go of things, but will almost certainly be nothing more than a memory in a year or so.

Next time your startup is going through a rough patch, remind yourself that things could always be worse. You could be trying to revolutionize social media.

Pointing out Yahoo!’s failures is so easy it almost isn’t any fun. Almost. We’re not about to let the opportunity pass us by, though, and there are at least three opportunities in front of us.

Yahoo! 360 was first, allowing users to create their own websites, run blogs, share photos, and see which of their connected friends were online/active. Sort of like GeoCities meets Blogger meets AIM, but not as good or as popular as any of them and several years late to the party with its 2005 launch. In 2007 Yahoo! Tried to answer Facebook with Kickstart, a profile-creating and friend-connecting site exclusively available to students and alumni from certain colleges and universities (remember when Facebook wasn’t overrun by edgy 12-year-olds and your grandparents’ conservative shooting club friends? … Yeah, neither do I). Yahoo! Mash launched the same year, allowing users to combine posts from various social media feeds all in one place. 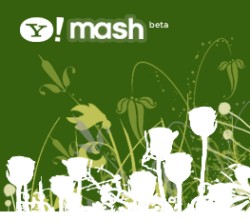 By 2008, all three of Yahoo!’s social media ventures was dead. Turns out trying to piggyback on other platform’s concepts and executing them poorly doesn’t lead to profit and success, even if you do already have millions of monthly users. Don’t worry, though—Yahoo! still has Bing as a search partner, and I hear they’re going to overtake Google any day now…

This one-time social media behemoth has one of the most interesting rises and falls in social media memory. It started when Ade Olonoh, founder of the form-building website and service Formstack.com, noticed the extreme popularity of “ask me anything” forms being created on his site. He created Formspring to make the process easier, and within a month he had a huge success on his hands. As one of the first question-and-answer social media platforms, where users could ask and answer questions to the world at large either under their usernames or anonymously, the site quickly gained millions of regular users after its launch in 2009.

But anonymity on social media has always been a tricky thing, and cyberbullying took a strong hold on the platform. Formspring was blamed for allowing anonymous adolescents to target and torment their victims, leading to a series of teenage suicides that put a serious dent in the site’s reputation.

Ongoing reputation struggles and platform copycats led to dwindling revenue, and Formspring was shuttered in 2013, only to be briefly revived as Spring.me before that was sold to an online dating conglomerate.

Founded in 2010, Mobli might have been ahead of its time. Or it might have had weak tech. Or it might have been horribly mismanaged. Possibly all three. What we know for sure is that this photo and video sharing app/platform once boasted millions of active users and raised more than $100 million from a variety of well-known investors. This was with its quasi-Snapchat-precursor functionality, its image-recognition algorithms, and its search function that let users see public posts of the real-time goings on anywhere in the world (assuming another Mobli user was there recording and streaming).

User growth stagnated and declined as other niche operators (including Snapchat) figured out how to do parts of what Mobli was doing in ways that appealed more to users. Revenue was also elusive for Mobli, and the company took down its apps and went into bankruptcy last year. They did launch a new social media platform, Galaxia, along with our next platform, Pheed, but…well, read on.

Launched in 2012 and bought by Mobli in 2014, one could argue that Pheed was actually a success as startups go. It made millions for the right shareholders, at least, and at one point boasted 80 million active viewers—pretty amazing for a video, image, and text-sharing app that ran on a pay-per-view model and allowed users to hold the full copyright for their content. But in the end, Pheed phailed as a standalone app, probably for many of the same reasons Mobli did.

First, competition in the video-sharing space was fierce, especially a few years ago when the phones and infrastructure needed to keep impatient youngsters around weren’t entirely reliable. A look at the other losing players in this niche tells you how hard it was for Snapchat to emerge as the victor: Twitter-owned Vine is defunct, Twitter-owned Periscope is struggling, Twitter-nemesis Meerkat was shuttered last fall, and those are just the ones we’ve heard of. Pheed? Phorget about it.

Mobli’s owners kept the app going until Mobli itself shut down. Now, Pheed’s homepage tells you to check out their new social media platform, Galaxia, which may already be defunct and sounds way too complicated to ever catch on. Something about multiple personas with multiple worlds for each persona so you can segregate your social media experience depending on your precise emotional state and needs at any given moment…it’s like Tumblr for obsessive compulsives. Ain’t nobody got time for dat. 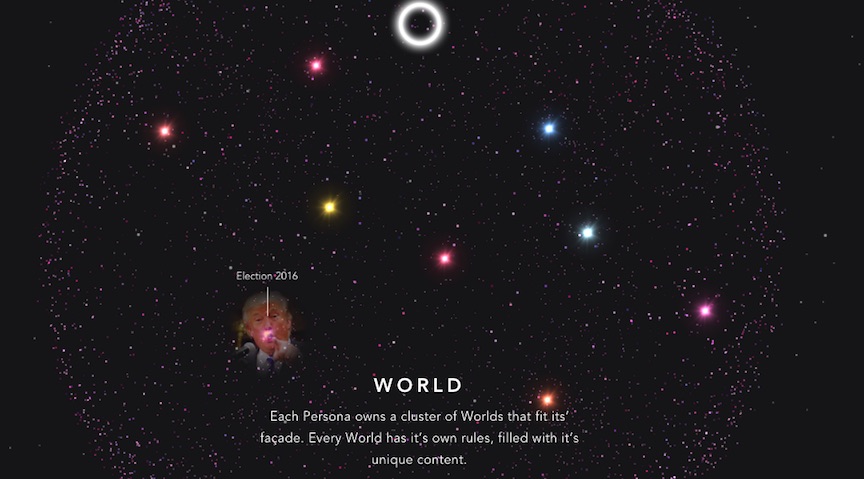 Likely a victim of its own success, Peach was an app-based social media platform designed to be more about sharing feelings with your tribe than posting funny memes, political rants, or never-ending updates about your workplace fridge with that bitch, Deborah. Not being a teenage girl, this app was never on my radar, but apparently, it caught on like gangbusters when it was first released, quickly becoming one of the top downloads on the Apple store.

We’ve all been there, right?

A few short weeks later, though, it looks like the developers were already in over their heads. There haven’t been any updates for close to a year, and many users complain that most of the functionality is inoperative after several iOS updates. Proof that sometimes funding and hiring someone with an MBA is an important part of growing a business. Vision and a positive attitude are peachy, I guess, but they don’t turn a profit or even keep the lights on.

Last but certainly not least is Ello, the “unFacebook” that’s still alive and kicking…barely. It started as an invite-only social media platform for all creative types, featuring a stripped-down layout that lent itself to long-from text posts, though of course photo (and video?) sharing was also supported. I, like millions of others, was one of the proud and exclusive few to create an account and promptly forget about it when it first launched and looking at it now it’s hardly recognizable.

They’ve basically accomplished a cross between Etsy and Pinterest or Instagram, as far as I can tell. You can still build a network of connections, but the platform is more geared to helping you “discover” new visual artists and artworks, and the ability to purchase much of what you see is clearly the raison d’etre of Ello’s third-party-advertising-free platform. Which isn’t a bad thing—I might actually check it out again next time I’m in the market for a fanciful font or a painting of questionable subject matter and skill level—but in terms of a regular social media hangout? I’m just not hipstery enough… 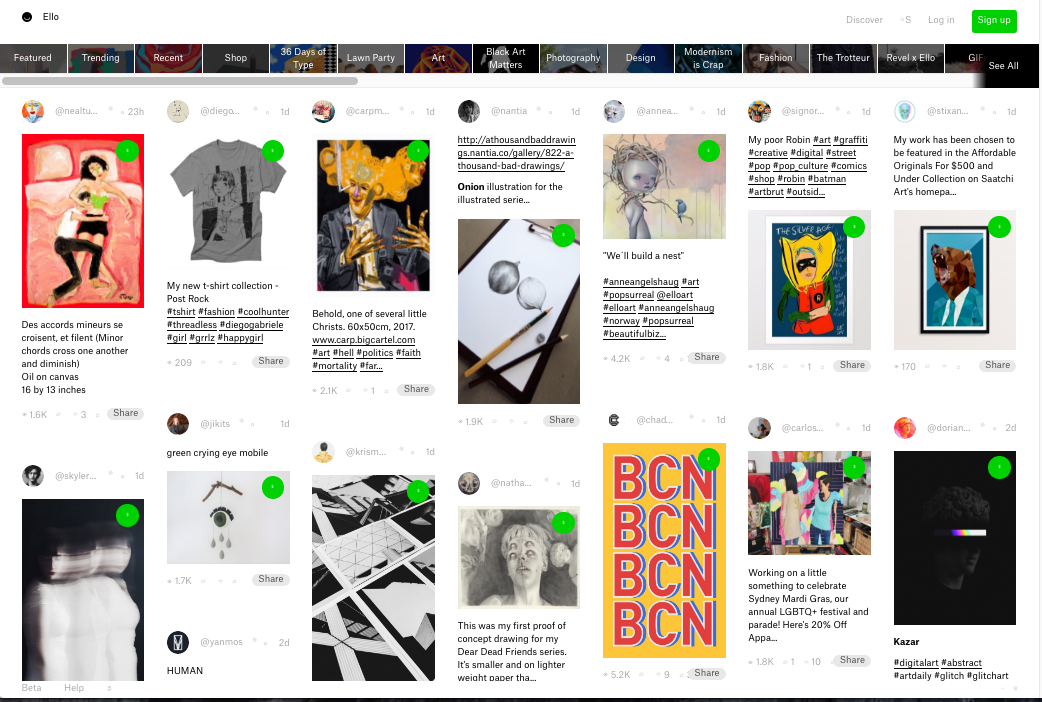 But hey, at least Ello and these other guys gave it a shot. Someone will have to be the next big thing in social media, eventually. I’ll be here to point them out after the fact and ridicule the failures, as always.