Apparently, now there’s smart clothing that will get you deals at fine-dining restaurants or invites to VIP parties. Further down the tech-heavy fashion totem pole, there’s clothing that boasts a few other cool smart features that amount to a concept of “custom fit” that few classic tailors can offer. These won’t quite shoot you into a different social strata, but they’re definitely worth some street cred, and in some cases, make life easier in their own way.

Vixole is currently killing it on Indiegogo, and understandably so. The infinitely customizable “E-sneaker” has a flexible LED panel wrapped around it that displays designs picked out from a smartphone app. Users can cobble together designs themselves or choose ones created by artists who are part of the design marketplace that is dedicated specifically to the sneaker.

Vixole’s higher-end versions come with NFC, navigation, call notifications, a pedometer, and VR gaming integrations. The long feature list has blown the socks off the Indiegogo community, from whom it has raised over $120,000 so far on a $30,000 goal. More than three weeks still remain in the campaign.

This one is either really really cool or really really cheesy–as so much of fashion goes, it will depend very much on the individual. If you’re a music junkie who always wishes they had an MPC with them, you’ll probably lean to the cool side. Think Geek has a shirt in its catalog that has an actual working drum machine built into it. The pads on the shirt recreate sounds from nine different kinds of drum kits when tapped, and you can layer and record the beats to create a loop.

Also included is an amplifier box which you can use to put on a little concert. I hear some of you going “Laaaaaame,” but it looks like DJ MC Lars was able to put together a pretty sweet tune using the shirt.

Like A Glove has a basic premise but with a very smart implementation; it helps find you clothes that fit by actually fitting connected clothes onto your body. Specifically, Like A Glove uses smart leggings to get precise sizes. The leggings made by the company are laden with sensors that measure the wearer’s body shape and measurements. Once it has that information, the leggings send it over to a free smartphone app over Bluetooth.

The app tallies the measurements obtained from the leggings against its catalog of pants and jeans to find something that actually fits from places like Levi’s, American Eagle, and Old Navy. The handy (or leggy?) technology takes the guesswork out of online shopping and does the job of translating your numbers into the numbers of the different pant size systems.

French company Eram created the Choose “chameleon shoe” prototype in partnership with a startup called, BlueGriot. Electronic strips on the body of the sneakers light up in different colors using optical fibers connected to circuits built into the sole of the shoe. Colors can be selected using an app that connects to the footwear via Bluetooth. 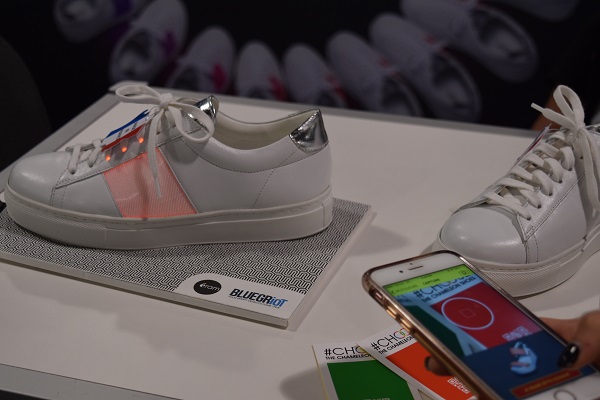 The app also has a color scanner, so users can scan their outfit or an accessory with which to match the color of the shoe. According to French website LSA, the Eram Choose is aiming for a late 2016 launch (so any time now), priced between 150 and 200 euros (~$160 – $210).

ShiftWear kicks are made customizable using E-paper displays, so they don’t have the lurid glow that LED displays do. That also makes them machine-washable and quite energy efficient if a static image is chosen (animations tend to be more power-intensive). The accompanying app, compatible with Android, iOS, and Windows, combines the features of a design software, social networking app, and marketplace.

Users can share their designs with friends or sell them on the marketplace for a 70 percent cut of sales. ShiftWear initially found its feet on Indiegogo by raising $927,000 late last year. Units can currently be purchased off the website starting at $349.

Even Google has some skin in the high-tech smart clothes game. The aim of Project Jacquard is to lay the groundwork for technology that can add touch sensitivity and gesture interactivity into all kinds of textile products. That includes such clothing as shirts with touchscreens and buttons built into them. Levi’s is a partner on the project. The first product to come out of the association is the Levi’s Commuter Trucker jacket, which has gestures for accepting phone calls, adjusting music volume, and getting the ETA on en route to a destination.