Say what you want about the Internet of Things (“It’s just a fad” / “Internet of Things? More like Internet of SHIT, amirite?” / “I don’t want a sentient toaster”), but you have to admit it has led to the creation of some cool products. A potential candidate for that list is Hayo, which lets you put virtual controls for different devices anywhere in a room. Hayo is currently making headway towards its Indiegogo goal, while possibly simultaneously scaring modular switch manufacturers everywhere.

Hayo makes use of augmented reality in a more tangible way than some other apps or gadgets do. The device can be used to place controls for smart home products anywhere in a room. So you could switch the TV on by tapping a sofa armrest or turn on the lights just by pressing the door sill as your enter a room. Where the virtual buttons are placed and what they do is left completely to you (as long as the connected device supports the function)

Once configured, you have a whole new set of virtual controls for home products, which means losing the remote won’t be the tragic experience it used to be. The way Hayo pulls off that sorcery is by first creating a three-dimensional map of the room in which it is placed. Two cameras are used for this. The first is a depth camera, which scans the room in real-time. There is also a regular RGB camera, which is called into action only during the configuration process, or if the device needs to be integrated with a security system. 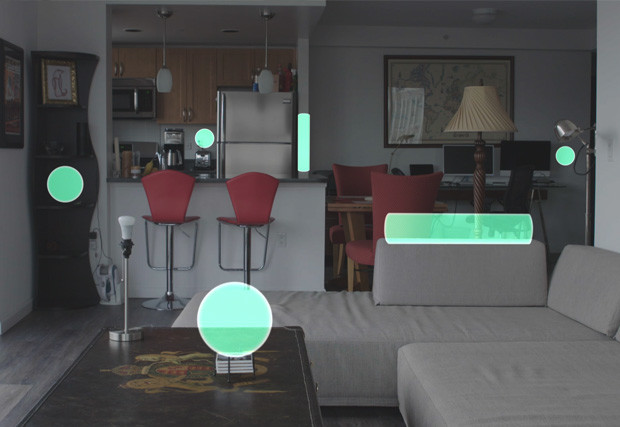 Once a room has been scanned by Hayo, users can proceed to position the virtual buttons. This is done using an augmented reality app, which is available on Android and iOS. The app connects to various smart home hubs or products available in the market (such as IFTTT, Nest, Sonos, etc.) so that their controls can be mapped onto different points in the room. From then on, Hayo’s camera constantly watches for a tap that could trigger a function in the devices to which it is connected.

If a virtual button happens to get accidentally engaged, there’s no real workaround – at least at the moment. Future iterations might include a way for the system to tell between humans and pets, adults and babies, and so on. Until then, users are just going to have to distribute the controls in such a way that the chance of a false positive is minimized.

Hayo is currently about $25,000 shy of its $80,000 Indiegogo goal with a month left in the campaign. Since the $199 early bird pledges are all sold out, you’re going to have to swing $219 to get a unit off Indiegogo. The retail price of the device will be $299. Shipping is expected to commence September 2017.