Mighty is a device that looks a lot like your average MP3 player, but running through its veins is software that allows it to do something no other music player on the planet can: play Spotify playlists without an ongoing connection to a smartphone.

Spotify is currently available to users on smartphones, tablets, and desktops; of these, phones are the most handy. But even phones are a bit of physical hassle if you’re, say, hiking, or working out at the gym. Phones are also what we use to do critical things like respond to emails or make calls, so there are times when you’re forced to forego a chance to listen to your Spotify tunes in favour of conserving battery life.

Spotify Premium users are given the option of downloading their music so they can access it offline, but even this doesn’t give them the ability to transfer that music onto a dedicated music player. That’s because Spotify protects its songs with digital rights management (DRM) software – in this case, songs aren’t downloaded as plain MP3s, but encrypted cached streams which can only be played using the Spotify client. Of course there’s various methods to bypass this, but none of them are whitehat – at least none were until Mighty came along.

Mighty is a 1.5” x 0.3” music player that has a 4GB Flash Hard Drive on board. Its layout will be familiar to those who’ve used the iPod Shuffle – the volume controls, seek, and play/pause/power buttons are exactly where you’d expect them to be. There’s one additional button that makes Mighty better suited for what it does: a playlist selector button which reads out the name of the Spotify playlist you’re accessing so you can toggle between them easily (playing songs through Mighty requires offline playlist access, so being a Spotify Premium customer is a prerequisite for using the device).

Mighty can play Spotify playlists despite DRM measures being in place because it runs on Android. So they way Spotify’s app sees it, Mighty is just another one of the three offline devices on which it allows Premium members to store their purchased songs. To users, on the other hand, Mighty is a nifty device on which they can listen to Spotify music without draining their phone’s battery or putting it at risk of damage. 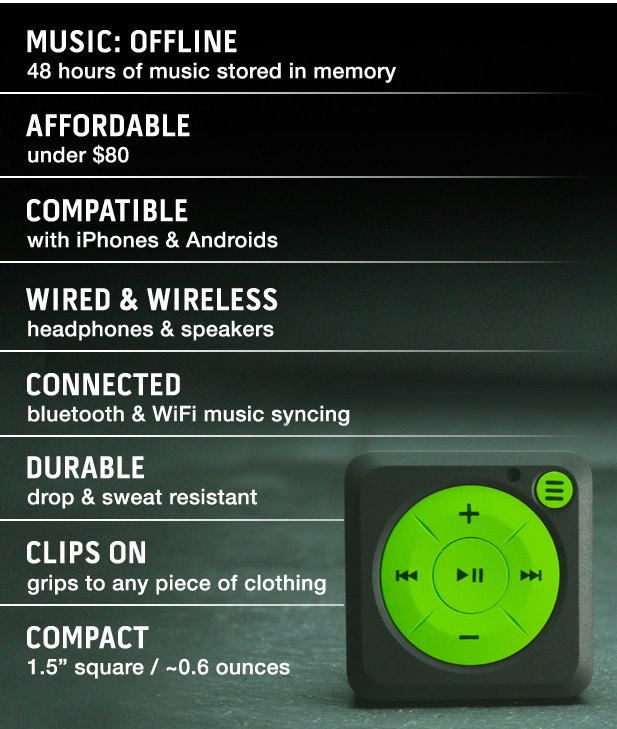 The device comes with an app (available on iOS and Android) which can be used to sync playlists over WiFi or Bluetooth. Bluetooth compliance also means that Mighty supports wireless headphones, which is an option iPod Shuffle owners never had.

All things considered, what Mighty offers is well within Spotify’s Terms of Use. In fact, things are so above board that the team has had multiple discussions with Spotify about an official partnership; they have yet to reach an agreement.

Mighty is live on KickStarter currently – with over 1,500 backers and more than two weeks to go, they are already 65% of their way to their $250,000 funding goal. The cheapest pledges that earn you a unit ($70 and $79) have already sold out, which is a sign of how eager people have been for such a device – the least you can get a Mighty for now is $100.

Don’t be too bummed about having missed out on the cheaper pledges, though – Mighty is likely to remain just as affordable when it goes to retail in order to compete with other music players on the market.