As an avid runner, I’m always on the lookout for apps that will improve the quality of my exercise excursions, which is why I was intrigued by the app, TRACKS. With the tagline, “Sound Blockbuster App for Running,” its premise is to give runners epic soundtracks and an immersive storyline while they travel their route. Think Zombies, Run! or The Walk, except with massive soundtracks, an alien invasion and general audio inspiration to help you hoof it.

As it says on their Indiegogo campaign page:

No more boring running! Run in battlefield with stories and missions optimized for running.

I was able to get access to the beta version and test it out this past week to see whether they delivered on their promise of eliminating the mundane from jogging. Unfortunately, they did not; overall TRACKS is a novel, promising concept that falls short when the rubber actually meets the road. That might explain the less-than-exciting performance on their Indiegogo campaign, where they raised just $5,812 out of a $10,000 goal.

Let me first talk about the pros. Tracks really is a novel and exciting concept. Running is notoriously boring. Mile after mile of mindless ground pounding, with nothing but the scenery and your thoughts to keep you company, or potentially the same old soundtrack pumping through Spotify. Tracks seeks to put you squarely into an immersive, somewhat interactive battle for humanity to sweeten the experience. 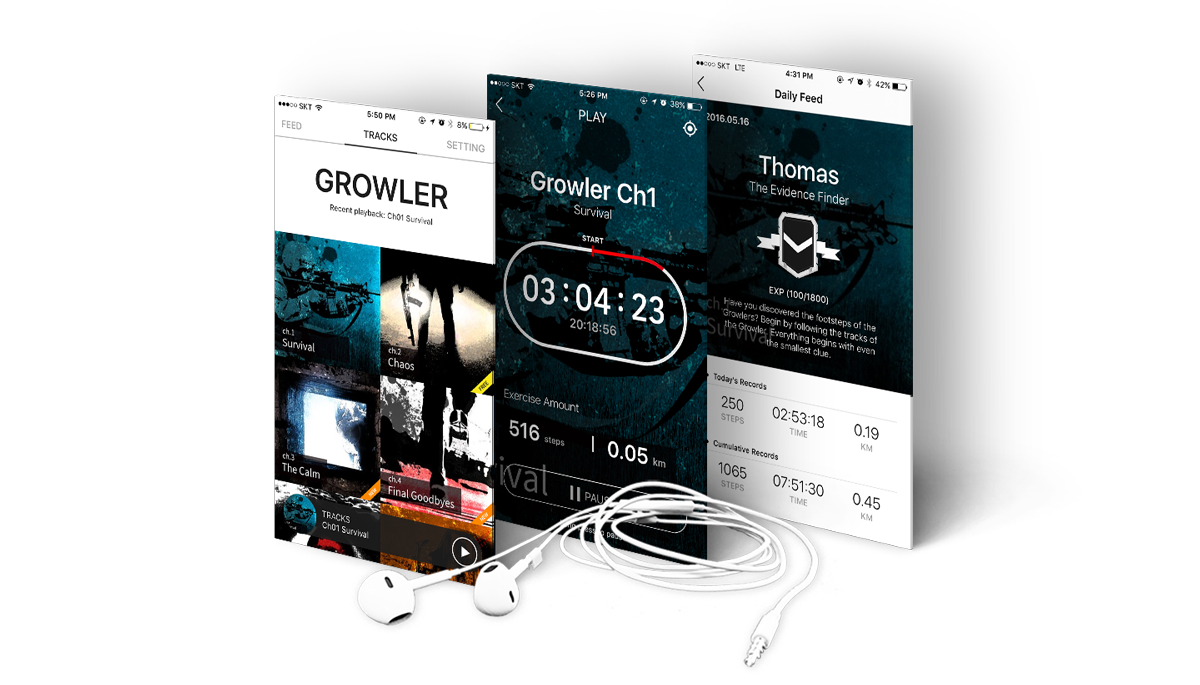 An alien race called “Growlers” has invaded Earth, and you are part of a small human resistance force, struggling for the survival of mankind. There are multiple chapters to the story, with each chapter being approximately 20 minutes long. Each chapter has 2 distinct missions, each about 10 minutes long. During the missions, you find yourself escaping Growlers, joining fellow soldiers on the battlefield, and hearing various commanders address you. Bullets whiz around you, growlers lurk behind you, and you even hear gruesome battlefield deaths.

The first two chapters are free, and the remaining chapters must be purchased. Oddly enough, I couldn’t find the purchase price for the add-ons anywhere. 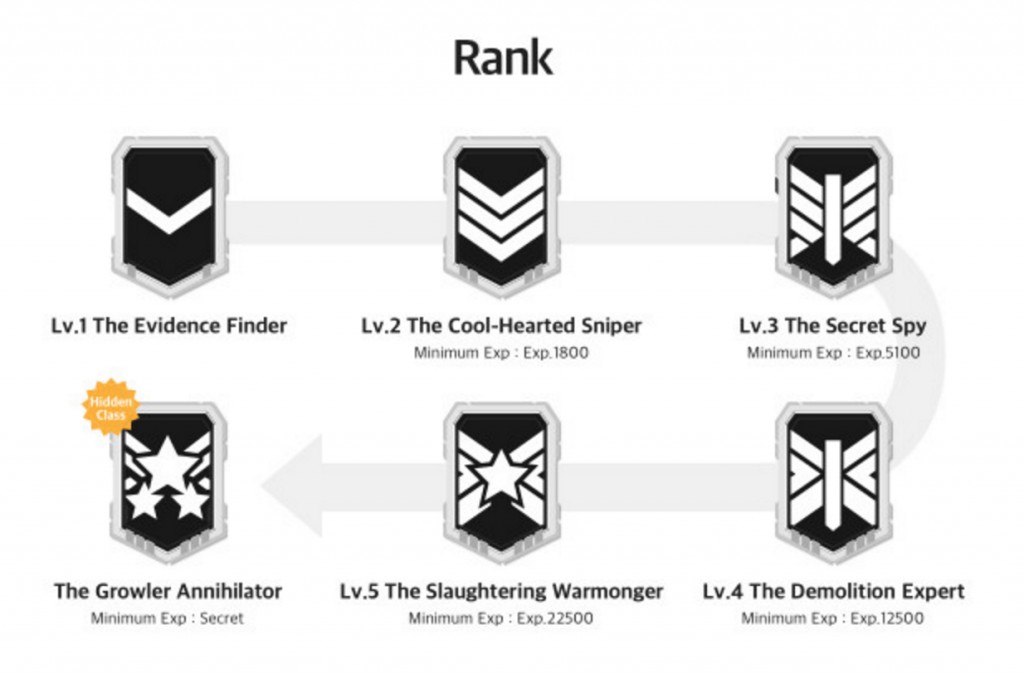 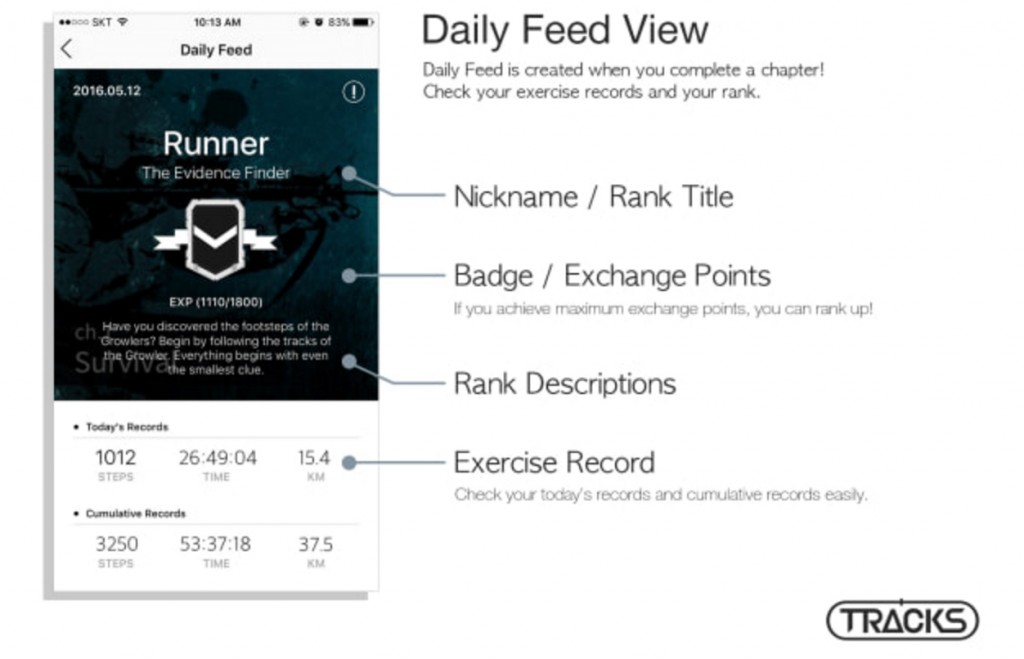 The sound quality is well done, complete with realistic roars, startling hails of bullets, Michael Bay-esque music, and constant jungle drums (think Phil Collins, “In The Air Tonight”). I’ve never been directly involved in a battle against bloodthirsty aliens, but following through in full on “blockbuster” soundtracks, I imagine the audio of the real thing wouldn’t be too far off from TRACKS. The app boasts a fairly extensive list of production credits from actors to sound directors.

Realism is the foundation of TRACKS. TRACKS’s main focus is to make scenes come true in runners’ minds without the visuals. To achieve this, we used the same workflow as the filmmakers, foley. TRACKS is an experience beyond audiobooks.

Tracks also has a solid monetization strategy; if you like the first two chapters, you’ll surely want to purchase additional story modules. But in spite of the novel concept and outstanding sound effects, Tracks just didn’t do much for me and didn’t have me convinced to shell out cash.

First and foremost, there was an issue of exercise duration and time engagement; out of a 10 minute mission, only around 3 minutes involved actual running challenges, such as sprinting for a full minute or doing intervals for 30 seconds. For the remaining 7 minutes, I was basically just listening to sound effects and a somewhat boring story. I’m a decent runner and the app didn’t challenge me or push me at all. If I want a story, I’ll just listen to a podcast or audiobook. For a dedicated running app, I’m looking for something that will push me to run harder and faster.

Second, my running speed didn’t effect any outcomes. I was hoping that running fast would mean escaping the growlers and running slow would mean being devoured, but it didn’t. I tested the app both while running and while driving, and both times my commander yelled at me to run faster. Even though the app utilizes the GPS to measure distance, it didn’t measure running speed. It’s hard to care when your actions don’t seem to influence the story in any way.

For an app that claims to be immersive and interactive, I felt like a very passive player. Nothing I did truly mattered, and for only about 30% was it even about me. The story wasn’t particularly gripping, and I found myself quickly losing interest. Tracks is a great concept that has real promise, but in the beta form, it’s quite boring. If they adjust it to accommodate more seasoned runners and make it truly interactive and responsive, it could be real winner. For now, however, it will likely only appeal to very novice runners and people short on their science fiction fix.

Looks like I’m back to podcasts and the endless road.