I like to refer to the 1980’s as “the good ol’ days”. Our computers were enormous, our action heroes weren’t emotionally conflicted, it was still cool to hate Russia, and we carried around massive boomboxes on our shoulders. The Volkswagen-sized ghetto blasters allowed us to feel the music – to feel Run DMC raising hell and Bon Jovi living on a prayer (which, given his lifestyle, must have been a very tepid prayer – but that’s none of my business).

Now we pathetically pipe our music through hard plastic ear buds that have the bass response of a box of Kleenex. We’ve lost the visceral, feel-it-in-your-bones side of music. Thankfully, Berlin startup Lofelt wants to bring back the bass with their new wearable subwoofer, The Basslet.

Users simply connect a dongle, called the “sender”, to the headphone jack in any device. The sender then communicates with The Basslet wristband via Bluetooth, allowing it to sync and then vibrate in concert with the sound coming through the headphone port.

Within The Basslet is the “Lo-Sound” engine, a small vibrating device that recreates bass frequencies as low as 10 Hz and as high as 250 Hz, also offering an “intensity” setting to control strength preferences. The output, according to Lofelt, closely mimics the feel of standing next to a subwoofer.

The high precision of the LoSound engine results in a deep sound experience – creating the illusion of standing next to a subwoofer. Our tech is based on an innovative voice-coil design with highly optimized magnetic flows which allows it to be extremely powerful yet remarkably compact.

The Basslet doesn’t change the sound coming through your headphones. It delivers the bass directly to your wrist, allowing you to feel the vibrations right around your ulnar and radial arteries. You also hear the bass in your ears. 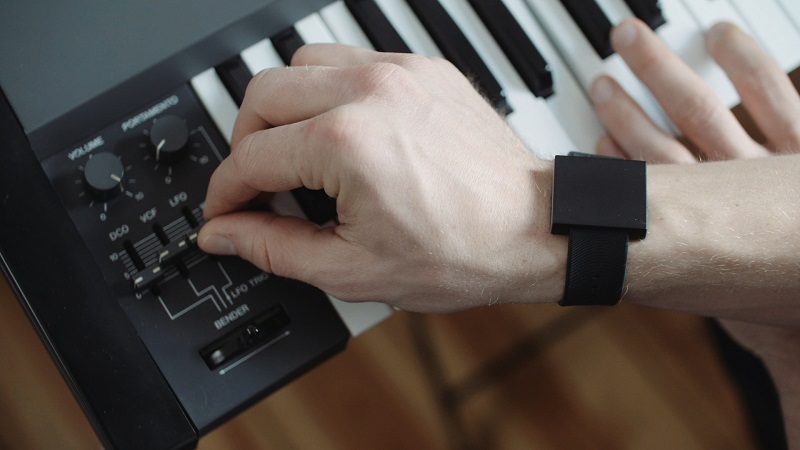 I have to admit, I’m a bit skeptical. I’ve played and mixed music for many years, and good bass is a really unique feel, rumbling deep in your chest and partially dislodging the contents of your bowels. Also, the Basslet is yet another wrist wearable. With my Apple Watch and Jawbone and Fitbit and magical hex bracelet, I don’t have much room left. Will those who aren’t hardcore audiophiles adopt The Basslet?

Also, the iPhone 7 probably won’t have a headphone jack, leaving a big question mark in the Basslet integration portfolio. Lofelt has acknowledged the potential issue on their Kickstarter page, and say they have ideas for addressing it.

Initial reviews seem mostly positive, indicating that, while not the quite same as a subwoofer, The Basslet certainly adds a visceral experience to music. Lofelt has touched a nerve with this product, already raising over €160,000 on a €50,000 goal with almost a month left to go in their Kickstarter campaign. Though the entry level packagers have all dried up, backers can still support the campaign and reserve their product for €139. The bracelets are expected to ship in December of 2016.