Sentiment regarding the state of the venture capital industry seems to turn on a dime. Reports regarding billion-dollar valuations are countered with claims that they’re the result of a bubble, and high spirits following successful IPOs are often tempered by stories of perfect startups self-disrupting. When it comes to the numbers and the overall health, how is the venture capital industry really doing? Here are four key takeaways from Pitchbook’s Q2 2016 report.

Yes, that is a large sum of money; the report says it can “safely be called ludicrous.” To put things in perspective, $17.7 billion is what was invested by the venture industry in Q1 2016, showing that there’s been a marked increase quarter over quarter. Given the combined effect of the first two quarters of 2016, it appears the total capital investment this year is on pace to match the $79 billion that the industry amassed last year. If that value is crossed, this would be the fifth consecutive year that VC investment has shown an upward trend starting in 2012. 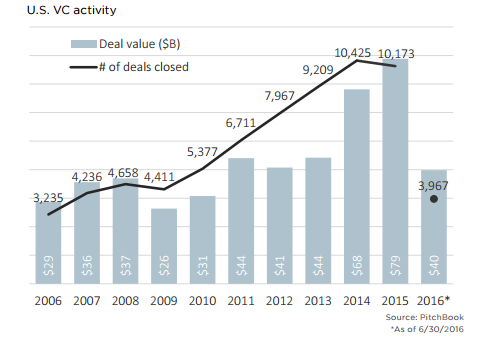 Despite the insane dollar amounts floating around in the industry, it appears that not all ventures gain equally from the affluence. Since 2014, unicorns and other late-stage companies have accounted for a lion’s share of the increase in venture capital invested. The result of this phenomenon has been that companies with high valuations have chosen to stay private longer and cash in on the favourable investment market conditions. As can be seen in the graph below, the money being pumped into unicorns forms a major part of the recent growth in overall funding. 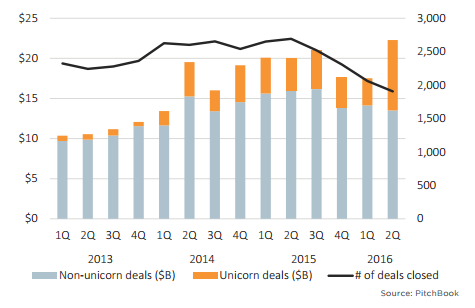 While venture capitalists have been almost indiscriminate in their backing of high-growth and high-valuation startups, angels and seed investors have invested with caution. Such investors spent $2 billion in Q2 2016 over 990 rounds. This shows that many of the important players do have money to spend, but they’ve become extremely selective in channeling the funds. The report speculates that this could be a result of the portfolios of high net-worth individuals showing greater volatility in recent quarters. It does also note that the angel and seed investment environment has shown greater sophistication through atypical methods for accumulating capital, including crowdfunding and angel syndicates.

A Departure Of The Exit: Fewer, More Lucrative Exits Are The Order Of The Day

The number of exits closed by venture-backed companies has been in steady decline. This phenomenon is so marked that the number of exits in Q2 2016 is the lowest since 2010 for the same window of time. Despite a drop in the frequency of exits, the ones that have happened have been profitable; exits accounted for $24.2 billion in H1 2016. Twilio managed to raise more than expected from its IPO, but the volatility of public markets means that companies remain hesitant to make public offerings.