Ever played with a Spirograph? If you have you’ll have experienced the anticipation and then the sheer magic of watching the patterns appear on the paper. And you’ll have had a foretaste of the Zen sand garden magic of Sisyphus, where kinetic art, technology and design merge into stunning, mesmerizing beauty for both marvel and meditation. The art table’s name comes from the Greek mythological king, Sisyphus, who was punished by being forced to roll a giant rock up and down a hill for all eternity. Likewise, beneath the glass of the table, Sisyphus rolls on forever, with a robot-powered magnet creating intricate designs in a thin layer of sand.

Science And Robots And Art, Oh My

Sisyphus is the creation of Bruce Shapiro of Minneapolis, MN, also known for his creation of the Eggbot. Obsessed with connecting computers to things that move, Bruce left his internal medicine practice twenty five years ago to devote himself to exploring motion control technology in art and education. He began teaching DIY Computer Numeric Control (CNC) and robotics at science museums, and creating large-scale, permanent installations in museums across the globe, including the Science Centre of Ontario, and the Science Center of Iowa, in Des Moines.

The current flavor of Bruce’s favorite obsession is to release home versions of his large-scale museum sculptures. Enter: Sisyphus, a masterpiece of kinetic art, that is also a completely functional coffee table. As Bruce describes it, “Of all works I made, Sisyphus stood out—it was my first CNC machine to break out of the studio/shop. No longer tasked with cutting materials to be used in making sculpture, it was the sculpture itself. It was also unique in another way—I wanted to live with it in my home. I’ve spent the last three years perfecting a home version that is beautiful, user-friendly, and that is near-silent and will run for years.”

Playing Paths in the Sand

As Bruce describes Sisyphus on the project’s Kickstarter page, “In my art, Sisyphus is a kinetic sculpture that rolls a ball through sand, forever creating and erasing beautiful patterns.” He continues, “Over time I have come to view Sisyphus as more than a kinetic art piece: it is an instrument. As a musical instrument plays songs, Sisyphus plays paths. My goal with this Kickstarter is to get Sisyphus into people’s homes for them to enjoy as both furniture and art, but also, to inspire a community of composers to write “music” for it.”

Here’s the simple version of how it works, according to Bruce:

“What you see is a fully functional table with a thin layer of sand under its glass top. Under the table is a two-motor robot (the “Sisbot”) that moves a magnet which draws a steel ball through the sand. The motors are controlled by a small Raspberry Pi computer which plays a set of path files, much like a music player plays an mp3 file. Sisyphus has no on/off switch; you simply plug it in and it automatically calibrates itself, loads a default playlist of paths, and begins playing. You can control playback—choosing favorite tracks or playlists—speed of play, and table-lighting from a mobile app (iOS now, Android planned) or by using any browser to connect to Sisyphus with WiFi.”

At present, Bruce is the only composer for the Sisyphus paths, using a variety of vector-based programs with algorithmic approaches to create patterns. These are then converted by a simple utility to the file format required for Sisyphus to “play.” This utility will allow others using vector software to convert and apply their continuous line drawings from common vector formats, such as AI and DXF. 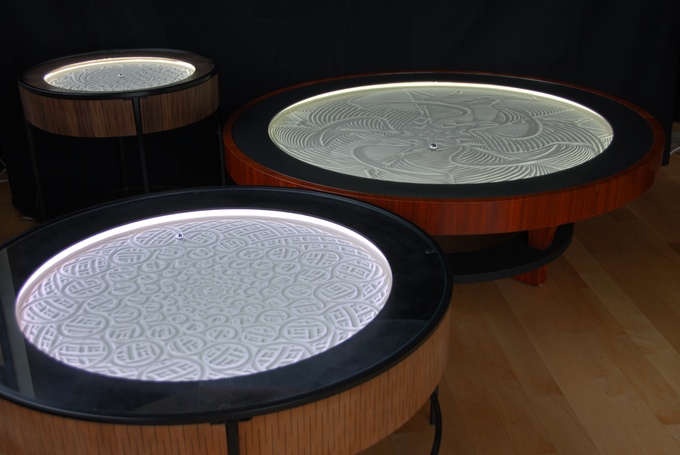 The functioning art table is said to be extremely quiet. The ball being pulled through the sand by the magnet does make a sound, but it is described as “soft” and apparently not heard by most people when the table’s glass top is on. The stepper motors used in the end table and 3′ coffee table are driven by electronics specially designed to minimize noise. When playback speed is reasonably slow, the motors are supposed to be nearly silent. The faster Sisyphus is run, the more sound will be heard, so for those sensitive to noise, slower playback is recommended. The 4′ hardwood coffee table uses servo-motors, said to be quieter than steppers, and thus allow faster playback with minimal volume.

While the exact number of paths that Sisyphus can play isn’t finalized yet, Bruce has said that it will be at least 25, with nearly all being algorithmic (the style he prefers). Some will cover the entire field with tight patterns, others will leave more space between the dunes. The time each path takes depends on its length, how fast you choose to play it, and how large your Sisyphus is. The result is that some paths take less than an hour to play, while others can take several hours.

Unlike music playlists, when a new path or track is playing on the Sisyphus art table you also see the most recent paths, and perhaps even earlier ones if they haven’t been completely overwritten. The visual interplay between these tracks is said to sometimes bring some of the most beautiful surprises.

The simplest track, which you can use to “erase” previous patterns, is just an even, tightly wound spiral, which takes about 5-10 minutes, depending on the size of the table. All paths designed for Sisyphus begin and end at either the center, or the periphery. This makes it easy to go from one design to the next in a playlist, since all tracks can be played forward or backward – the software automatically links the playback according to playlists you can create and edit.

Sisyphus is available as a an end table, a 3′ coffee table (also in a custom hardwood version) and a hardwood 4′ coffee table. Be warned, some assembly is required! So far, more than 1,700 backers having pledged more than $1.7M on a modest $50,000 goal. Many of the lower reward levels are no longer available, but there are still pre-orders upwards of $800 that can be made before the campaign wraps up at the end of this weekend.

If for any reason (like election season overload) you’ve decided that the time has come to draw a line in the sand to preserve your sanity, Sisyphus’s paths may offer just the way to Zen out and get your groove back. Just don’t be surprised if the “function” quickly fades when you quickly realize you’d rather not have anything covering up the artwork.