The fan boys and tech press are thrown into a frenzy every time Cupertino sends out a call, and yesterday was no exception. In the leadup to yesterday’s big Apple event, there was speculation about a fancy new iPhone to outperform all iPhones, a new iPad that would absolutely destroy the existing tablet and netbook market, and a sleek new Apple Watch to rule them all.

What was actually revealed was…less significant. There was no groundbreaking product revealed in Apple’s flagship line of smartphones or in its suite of tablets and wearables. There were announcements made, but none particularly exciting. Instead, most of the weight seemed to be behind CEO Tim Cook’s communication of Apple’s shifting strategy. At a high level, the shift is a significant one – even if it doesn’t turn out to be a smart one.

Here’s what you need to know about what happened…

Most consumers and a dismaying number of analysts care only about the three core Apple products: the iPhone, the iPad, and the Watch. With a focus solely on the performance and features revealed on Monday’s stage, a sense of palpable disappointment is understandable.

We did get a new iPhone and a new iPad, but instead of next-gen game changers they were actually steps back – or at least steps down. The new iPhone SE is essentially the iPhone 6 in the body of an iPhone 5s (Tumblr will come up with a name for this type of smartphone dysmorphia, I have no doubt). That being said, it did get some fairly significant improvements under the hood: its 4-inch screen hides the power of an A9 processor, and the handset also sports a 12-megapixel camera that can shoot 4k video. 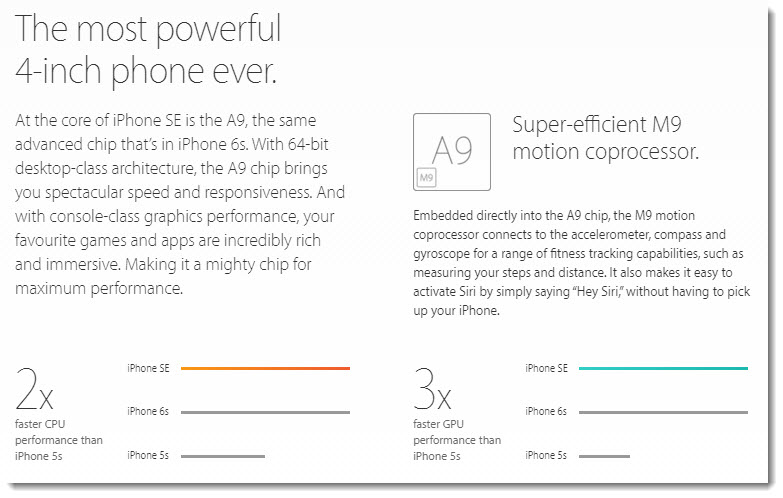 It’s not a bad option at $399 ($499 if you want to jump from the 16GB base model to 64GB of storage), especially if you want a smaller phone and you’re are a die-hard Apple fan. But it’s not quite the revolutionary step forward people have come to expect from these pumped-up press releases.

The iPad Pro received similar treatment yesterday, with the top-end Apple tablet getting a shrink job, ending up with a 9.7-inch screen. Other specs and features remain in line with the larger 12.9-inch Pro released last year; both models have a “True Tone” Retina display, they run the same 64-bit A9X chip, have four speakers, etc., etc., etc. It’s just smaller, so again, not exactly jaw dropping.

Then there’s the Apple Watch, which didn’t really get an update at all. It got accessorized. According to Cook, a full third of Apple Watch wearers regularly swap out the wristband, so Apple introduced a bevy of new bands to keep everyone beautiful. As someone who buys four pairs of the same pants during my annual clothes-shopping ordeal, I’m probably more firmly in the “who cares” camp than most. They did drop the price on the basic 38mm Apple Watch Sport by $50 too, though, so there’s that…

The real takeaway here, however, isn’t from the products themselves, but from what they reveal about Apple’s plans for growth, both explicitly and through their pricing strategy. The iPhone SE isn’t targeting the early adopter tech crowd, or the latest and greatest gadget grabbers; the iPhone SE is targeting mid-market consumers. There’s a new iPhone with a price point more appealing to the masses than Apple’s typical premium, and that’s a significant revelation.

The smaller iPad Pro is also cheaper than it’s larger twin brother, and more importantly, it competes with the convenience and portability of smaller tablets that have proven popular with a wide variety of consumers. Putting Pro performance in such a small package is sure to appeal to power users who found the iPad Mini too limiting and the original iPad Pro to cumbersome. Apple is filling in the gaps of its product line and aiming for broader appeal, not simply the (real and wannabe) technorati dollars.

In other news, Apple announced its new CareKit program, piggybacking on the ResearchKit it introduced a year ago. Apps developed using the ResearchKit platform allow users to share data with medical researchers; CareKit does the same but with medical providers. Doctors and other relevant parties will be able to receive patient updates about medication, symptoms, etc. as measured or reported via Apple devices and the apps that third parties design for them.

There are already a few apps available that are powered by CareKit, and this marks another major step forward in Apple’s drive to become a healthcare technology leader; the data-capturing and crunching could lead to real improvements in care, helping provide momentum to advancements in real-time treatment and feedback.

Cook also took some time to highlight Apple’s environmental efforts, like its solar farm in China and the list of recyclable materials it uses. Far cooler was Liam the Robot, a prototype that is able to safely break down an iPhone and remove the useful metals and certain other components for recycling and reuse. With over a billion iProducts in the world, this could mean a major reduction in Apple’s mining impact and its overall resource demand.

Oh, yeah, and Apple TV is getting a new operating system. There’s also a new iOS version out. If you own any affected devices, you’ve likely already received a half-dozen update messages. Probably starting while the conference was going on.

So much for breaking news.

Finally, the biggest news of the day had nothing to do with what Apple is working on, but rather with what it refuses to work on. After more than a month of battle in the courts and the press, the Department of Justice (on behalf of the FBI) asked the judge in the San Bernardino iPhone case to suspend everything for the time being. The judge did exactly that, just one day before the scheduled hearing that could have finally set a precedent for tech developers’ responsibilities when it comes to security, cybercrime, and real world terrorism.

Basically, the FBI said, “you know what, maybe we actually can get into this phone without forcing Apple to build a backdoor that allows for global, on-demand brute force password hacking” (something many in the tech world have been saying since the case began). They asked the judge to indefinitely suspend the proceedings, promising to deliver an update to the court at a later date.

What this looks like is the FBI sensing the legal tide (not to mention the tide of public opinion) turning against them. Rather than face a potentially game-ending precedent, they’ve decided to kick the can down the road. We’ll have to wait for another test case to settle the many major legal issues raised by this whole situation.

Cook gave yet another impassioned speech about Apple’s commitment to your security (subtext: your dollars). Even if it proved to be about as useful as an Apple Watch band, it was still fun to hear.