He’s been called the “the pimp daddy of budget travel,” and “editor in cheap.” Stuart Schuffman, popularly known as Broke-Ass Stuart, lives life in caps! In a world of fake news, no-one is more ostentatiously faux-real. In real life he wins the award for most personable potty-mouth ever, and, what soon breaks through when you talk to him, is that this guy really cares – not about stuff, but about people, and especially about the place he calls home, San Francisco.

How did you get from “Broke-Ass Stuart” to a book deal and a TV show?

I’ve been doing “the Broke-Ass Thing,” for a long time starting when I was 23 or 24. I started off making zines, I was selling them from my backpack. For those not familiar a zine is before there were blogs you could go to Kinko’s and photocopy, cut and paste and boom, you had your own publication and do what you want with it, it was underground punk style. I started off selling zines from my backpack and I was getting popular. That eventually to me doing some writing for Lonely Planet and I was doing travel writing. The original zine was Broke-Ass Stuart’s Guide to Living Cheaply in San Francisco, and then after Lonely Planet I wanted to continue doing the Broke-Ass Stuart thing, I wanted to get a book deal, and I, believe it or not, found my book deal on Craigslist of all places and it’s 2005, 2006 or something like that. The joke I say is I was on Craigslist looking for a blowjob and I got a book deal instead. That’s a joke.

The book deal turned into “Broke-Ass Stuart’s Guide to Living Cheaply in San Francisco” and a similar book for New York.  The books were followed by the website as a destination for arts and culture for people who aren’t rich, Then in 2011, I had my own television show, which was called, “Young, Broke, and Beautiful,” and it was a travel show where I got to go around the US exploring the weird and wonderful. Throughout that whole time the website was growing and getting more popular. Then last year, 2015, I ran for mayor of San Francisco. 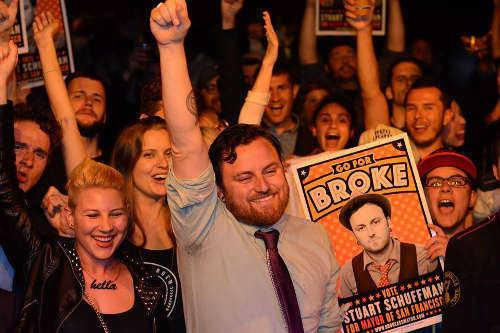 It was performance art, political art and protest. Yeah, that leads me to where we are now.

Have you ever thought of getting venture capital?

I have no “big money” behind me. I focus on creating good things that are cool and make people feel good. I’m sure if I wanted to I could get venture capital but then I’d have to fucking deal with those assholes all the time. Instead I can slowly build my thing my way, and I don’t owe anybody anything, and I don’t have to answer to anyone.

You have people working in both San Fran and NYC – can you describe your organization’s offices and how many people you have working for you?

By offices do you mean people working in their underwear in their living room? Then yes. It’s all contributors, about 20 or 30. I don’t have an office, I’ve got a co-working space that I go to sometimes but most of it is run out of my bedroom.

So what do you think about all these f**ing startups?

We’re in an interesting place, I think we have some of the best minds of our generation come to the Bay Area to cast their lot with the money men and see what they can make. Some of them are doing creative beautiful brilliant things that may change the world for the better, but most of them are doing stuff that your mom used to do for you that you don’t want to do anymore. How many startups are trying to do your laundry? It’s a loaded complicated issue.

How do you think the tech companies and startups contribute to SF’s housing issues?

San Francisco no longer is the heart of Bohemia because that’s been chased out due to the fact that you can’t be a broke artist living here anymore. The only reason I can be where I am is because I’ve got a good landlord and I’ve got rent control. Otherwise I would have been out a long time ago and I’m lucky I don’t have kids or a mortgage or a car, that way I can pay my rent and continue to pay my writers and do things and keep creating. It’s only because I’ve got a very low-cost lifestyle. We’ve seen so many evictions over the past bunch of years and that’s due to … I’m not blaming tech workers, there’s nothing wrong with moving to a wonderful city for a good job, there’s nothing wrong with that, but the problem becomes they become unwilling pawns in a scheme where a handful of people at the top make a ton of money and these people do decently, but then pay $5,000 a month for rent.

Is it a case of a “transient mentality?” Get rich quick and then move on?

One of the problems is a lack of engagement. People come to San Francisco and don’t engage with the city. They work too much and they’re here to make money and then they take Ubers to and from work, and they order their food from a delivery service, they’re not engaging with the city. They didn’t come to make a relationship with San Francisco, they don’t see a long-term relationship with it. It’s important to get involved and to care and to be a citizen in the place where you live, instead of just a worker.

Is there a solution?

It’s sad. I live on the border of the Mission and Soma and my neighbors live in tents, there’s a lot of them. We need progressive holistic measures that put people in transitional and permanent housing and we need the political willpower to do that. Bullshitting and grandstanding is just a way to curry political favor from people who have money, and who don’t know enough to care enough.

What progressive holistic measures and tech are you excited about?

I’m excited by some of the things like big experiments with guaranteed living income. I’m excited about the possibilities of the future of VR, but there’s a lot of it that’s just … I don’t even know what the fuck it is.