From the printing-press to button-making, radio to The Tonight Show, evolution in tech and media have been pushing evolution in political campaigning for centuries. In an age when virtually every purchase you make (and every virtual purchase you make), every headline you click, and every image you linger over is recorded and used to flesh out your online profile, it’s hardly surprising that politicians have started getting in on the action.

Somewhat less predictable, though in hindsight perfectly logical, is the way the tech world has responded. Today’s campaigns take competition to an individual level, where the ability to reach out to millions of specific voters in a “personalized” way can decide an election. The message still needs to be there, but the campaign that’s most effective at getting the message to the right people at the right time is the campaign that’s going to win. It’s a marketing game.

And that’s why, no matter where your politics lie, all eyes need to be on Hillary Clinton, Eric Schmidt, and The Groundwork. 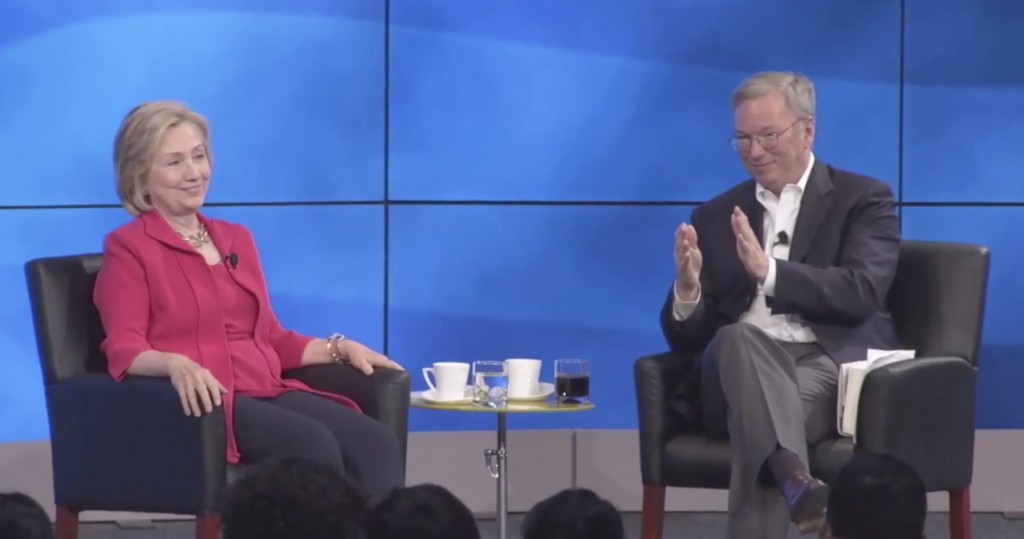 The Groundwork is a startup backed largely by Eric Schmidt, former chairman and CEO of Google and now CEO of Alphabet Inc., Google’s recently-created parent company. It’s work is somewhat secretive, and it has only one known major client: Hillary Clinton’s official presidential campaign. In fact, it’s the campaign’s largest tech vendor in terms of dollars spent during the third quarter of 2015.

The Groundwork earns its fees by digging up, organizing, integrating, and analyzing all of the data a modern campaign needs, presumably including profiles on voters and potential voters, volunteer information, measures of advertising and outreach efficacy, and so on—everything a multinational conglomerate does in terms of its marketing analytics, but with a fixed timetable of eighteen months or so. Once the 2016 election is over, Clinton’s whole effort shuts down.

But The Groundwork doesn’t have to.

The temporary nature of political campaigns, along with long hours and low pay, has long made attracting top tech talent into the political realm little more than a pipe dream. Win or lose, there was nothing permanent about the teams or systems built around any given campaign—no chance for a spinoff, a buyout, or other lucrative exit.

Forming The Groundwork as a separate company, not simply a part of Hillary’s team, means it can stick around and apply what it’s built to future campaigns. This is a new take on tech in the political world, and it’s groundbreaking for more than a few reasons.

In addition to making the digital tools that campaigns need to be more permanent and more available, albeit on a limited basis (conflicts of interest within the company and with Eric Schmidt’s own political affiliations make it all but impossible for The Groundwork to work across party lines—it’s going to be a Democratic company by necessity), separating the tech vendoring from the internal workings of the campaign itself means money can flow without regard for any pesky campaign finance restrictions.

Schmidt, a staunch Hillary supporter according to some campaign insiders, hasn’t donated any money to her campaign as of yet, but a portion of his billions are making sure The Groundwork is up and running on her behalf. It’s an investment, not a donation, and he—and other supporters—can invest as much as they want in technology that, this time around, will only benefit a single presidential candidate.

Not a bad trick, even in the era of Super PACs.

All of this spells major opportunities to similar and parallel startups that follow suit. There’s more than enough room in the market for companies doing exactly what The Groundwork does (though exactly what it does isn’t public knowledge) for other parties and other presidential candidates, not to mention the thousands of political races for other offices.

Other services needed by campaigns on a temporary basis could be provided more efficiently by permanent companies that simply shift clients with each election cycle. There is clearly eager support in the tech and investment communities. Mobile political outreach is still in its infancy relative to where commerce is; that’s a balloon that’s bound to blow up within the next decade.

So, get out there, you dreamers and developers of this quasi-democratic republic of free-market enthusiasts. The groundwork’s already been laid.