Today, Facebook introduced us to Facebook Marketplace, a new Craigslist-style forum where users can buy and sell items with their personal profiles accompanying every transaction.

Facebook aficionados will recall that the company tried to introduce Marketplace 9 years ago. It ultimately fizzled out, but that was before smartphones, and in the years that followed the grassroots community of groups that were buying and selling continued to grow. More than 450 million people use Facebook for commerce, with or without a / the / its marketplace, and that number will surely grow now that they’ve slapped a dedicated UX on it. 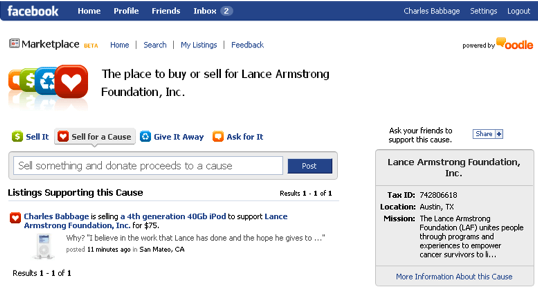 When Lance was known for philanthropy. (Image via Adweek)

The new Facebook Marketplace has a few features that are unique among online “classifieds” services—for lack of a better term. Since it’s embedded in the mobile app, with the icon appearing along the bottom navigation band, Marketplace users can quickly find items they want based on what’s actually nearest to them.

On Craigslist, it can be a challenge to narrow down searches to your county, much less your neighborhood; Marketplace allows for precise location searching. You can of course also search based on category, price or precise search terms. The app actually opens up to a feed of items being offered from within your own network, so if trust is your primary concern, this is a nice touch.

Once you’ve found what you’re looking for, you just initiate a chat with the seller and make an offer—the conversation is contained within a separate Marketplace messaging thread, not lumped in with your personal Messenger chats. If you aren’t ready to commit, you can actually save the product for later.

All of your correspondences and previous “transactions” (more on that later) are saved for reference. For some buyers, that may strike them as handy, for others, perhaps a little troubling. With this market being integrated with Facebook, you are putting your real profile—with whatever security settings for non-friends you may have, or lack thereof—on the radar of a potentially annoying stranger (think covert sales person or persistent creep). It’s just a little bit more personal than a random user account on eBay, or a fake name and obfuscated email address on Craigslist. On the other hand, the Facebook connection should make it much easier, as a buyer, to spot a suspicious seller before ever engaging—somewhat in the spirit of mutual friends on Tinder.

From the seller’s side, it’s extremely easy and quick to post new items, so perhaps the ease of use itself will deter pesky behavior towards former buyers. It all happens from right inside the app; all you have to do is take a picture of the item, fill out a title and description, and then click a button to fire it out to your community and the extended world.

Hand-raising concerns aside, Facebook Marketplace ultimately benefits from the transparency and linked-to-real-life factor. You’re staring at another person’s profile picture while you’re chatting with them—not to mention the people they know, and the people you may know in common. In today’s world, that can be enough to deter some detestable behavior (at least in theory). I wouldn’t want to do business with my YouTube subscribers.

The one major drawback with Marketplace is that they don’t facilitate the complete transaction. Even though Facebook allows users to send and receive money through their messenger app, that function hasn’t been integrated into Facebook Marketplace yet. Services like eBay and Alibaba still have the leg up here with one-click buying.

Marketplace is currently beta testing in 4 countries: The US, UK, Australia, and New Zealand. No one has commented on the name choice yet, even though it’s the equivalent of Snapchat opening a video store called Store. But Facebook is already a leader in the space of online transactions without even really trying, so I suppose they earned that. Given how many people use Facebook, how often they use it, and how integrated this experience is to not only their day-to-day, but to their sense of social connection, this could very quickly be the Marketplace to beat. It’s already more attractive than Craigslist.