Imagine losing weight without having to do anything new. Thanks to science it’s not as crazy as it sounds.  One of the more notable technologies gunning for that goal is cold thermogenesis (also known as cold calorie burning). It’s a fairly simple concept; cause the body to shiver and the individual can burn 100 calories every 15 minutes.

That’s the premise of the Thin Ice Weight Loss Clothing Line. The device looks like something out of a sci-fi movie (or a game of laser tag) but according to the startup, the vest fits under most regular outfits. According to the Kickstarter campaign, here’s how it all works at a high-ish level:

Allegedly, it is this process that can account for how “ripped” Michael Phelps was even though he ate like a total monster; water is more thermally conductive than air, heat was leaving his body at a rapid rate, his body needed to burn calories to stay warm.

Cold calorie burning has been the subject of numerous scientific studies, such as one summed up in Scientific American. In that study, six participants wore a cold suit at 64.4 degrees Fahrenheit over the skin. The researchers found that the participants wearing the suite burned 250 calories more than they would have during the same duration of inactivity at more typical indoor temperatures. Those numbers would equate to a dieter losing a pound of fat every two weeks.

The vest also comes with a companion Android, iOS, and Windows Phone app, which serves as the command hub for the device. The app enables users to manually control the temperature or configure the automated system. The app provides an ongoing estimate of calories burned as well as a few games and achievements users can unlock.

There’s also Lumidiet, a light therapy band. The device looks similar to a weight lifting belt and is equipped with LED lamps and vibration motors designed to burn fat in during periods of inactivity. According to the Indiegogo campaign page, low level light laser therapy alters the chemical properties of cells by increasing the emission of lipase. That enzyme breaks triglycerides into fatty acids and tiny molecules that eventually emitted through holes created in the fat cell walls, and dissolved in the body’s lymphatic system.

In the first experiment conducted by the creators of Lumidiet, participants who kept their diet and habits and wore the device for 30 minutes daily lost an extra 1.5kg in a month compared to the control group. In the second experiment, participants were advised to complete cardio exercises during the week. This resulted in some participants being able to achieve a six pack in just a month. 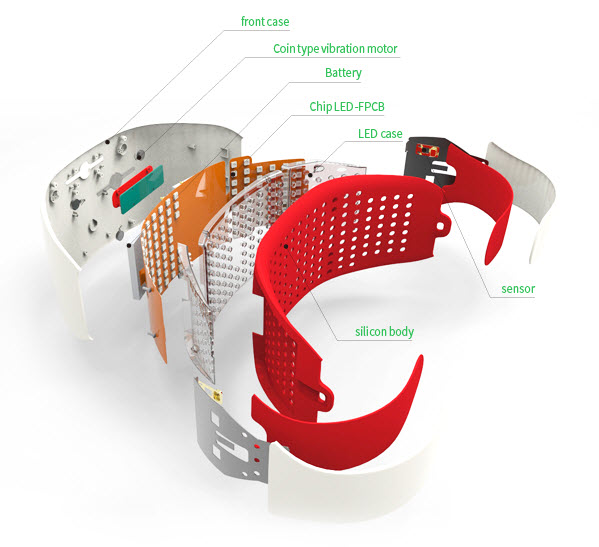 To date Lumidiet has raised $59,206 from an undisclosed number of backers. The pre-order price is listed as $210 and the product has an estimated ship date of September with a planned market launch of October.