For years, the startup scene seems to have thrived by heeding the historic injunction, “Go West, young man!” Today’s intrepid pioneers—the Zuckerbergs, the Luckeys, the Svanes—well they’ve been flocking to California like so many prairie schooners, and according to anecdotal assessments they couldn’t have asked for a better startup community.

According to the numbers of late, though, “growth entrepreneurs” (what you and I would call “startup founders”) have been having a better time of it back East. The Kauffman Index of Growth Entrepreneurship was released last week, and it shows a different map of Startup Nation than one might expect.

The State of Startups Across the Union

The Kauffman Index of Growth Entrepreneurship uses three calculated metrics to rank each state (by population) and the nation’s largest metro areas in terms of their startup success. These are not predictions about the future or analysis of the current environment, but simply data that shows how successful actual startups have been in each state. The metrics used to create the index were as follows:

is determined by changes in employment in new companies during their first five years, and taken as the average of all startups in a given area.

is the percentage of small companies in a given area that grew to employ 50 or more people within their first ten years.

is the number of private businesses doing $2 million or more in annual revenue, who have achieved three years of 20% revenue growth, as normalized by the total business population of the state/region.

Those metrics were combined to create an index score, then the states/metro regions were ranked. And the results…well, see for yourself: 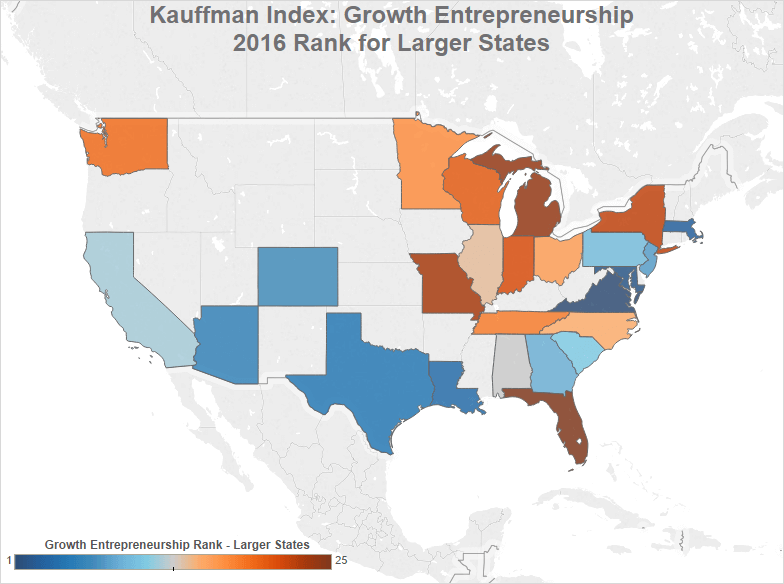 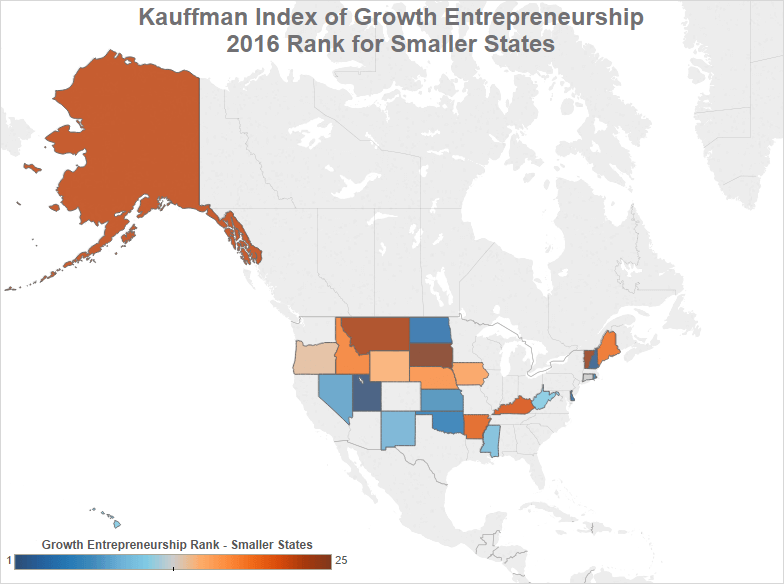 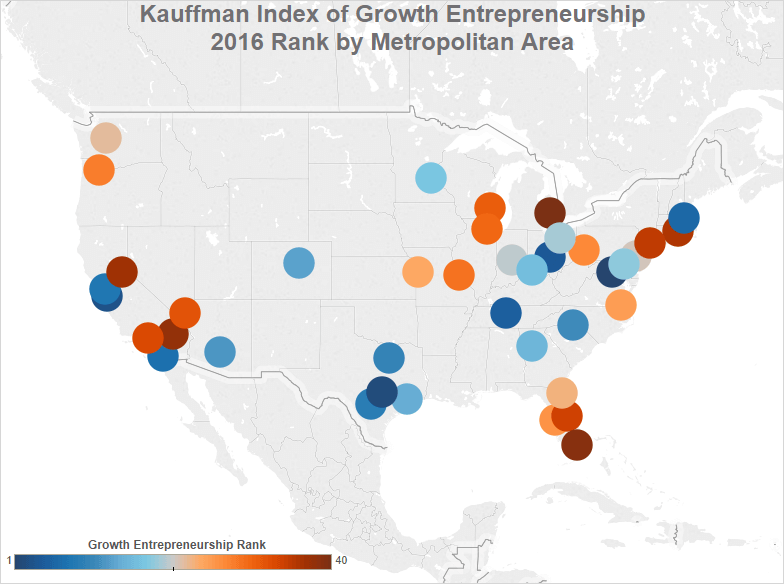 For the 25 largest states (by population), Virginia and Maryland were ranked 1st and 2nd, respectively, for overall Growth Entrepreneurship success. This is due all but solely to the influence of Washington D.C., which itself is ranked 1st among the nation’s metro areas for its startups’ growth; the other metro areas in the two states (Baltimore in Maryland and the Virginia Beach/Norfolk region in Virginia) actually fell considerably in rank since last year.

California, meanwhile, placed 11th among the largest states. Silicon Valley, as estimated by the San Jose metro area, was third among metro areas, and the state is home to two other metros in the top ten; San Diego at 7th place and San Francisco/Oakland/Fremont at 8th. But that wasn’t enough to put California on top, and a quick look at the actual scores for these regions explains it: while the Golden State might have more metro areas in the Top 40 than any other, there’s a wide spread among the high scorers, and even Silicon Valley comes up short.

Washington, D.C. wasn’t just first; it won by a huge margin. An index score of 14.38 left the 10.9 of second-place finisher Austin, TX in the dust. From there, you have to drop nearly three more points to get San Jose’s score of 8.04, and Columbus, OH is right behind with a 7.05.

Ohio is actually another interesting character in the story these numbers are telling. Not only did Columbus provide the fourth-friendliest environment to startups of all metro areas in the nation, but both Cleveland and Cincinnati saw their ranks jump considerably from last year; from 26th to 19th for Cleveland, and 35th to 16th for Cin Citi. Some may call it Midwest, but Ohio is firmly east of the Mississippi and breaks the East Coast way on the continental divide – this state is definitely tilting the balance of startup power away from sunny Silicon Valley.

A notable semi-surprise among the small states is Utah’s first-place finish. The Great Salt Lake isn’t exactly the Pacific Ocean, but it seems to have engendered the same startup spirit, as well as plenty of tax incentives throughout the Salt Lake City/Provo/Ogden region. As that region didn’t even make it into the top 40, though, I don’t think this detracts from the Eastern Startup Theory too much.

More than half of the top metro areas for startups are in the Eastern United States, according to the Kauffman Index. Silicon Valley is still going strong, but it could very well slip into Seattle territory (which dropped from 18th to 22nd) as the rising cost of living and the soaking up of tech talent by the already-big makes things tougher for those starting off small.

We’ll check back with the index next year and see where the trends are pointing.