Of the many competitors with which Google has serious beef, Apple is chief. Or maybe it just feels that way because of how vociferous loyalists are in each camp.

When the fanboys are out in full force comparing the two, the Nexus and iPhone go head to head. But while Team Google will often try to change the subject to something more flattering, like online ad revenues, it’s not because they lack confidence in their hardware.

Between the Nexus line of phones and tablets, Chromebook and Chromecast devices, and Glass, Google is pretty knee-deep in the consumer technology market. While the new iPhone might make the Nexus “look” really bad, and compared to ad revenues it’s not exactly a cash cow, Google shouldn’t be looking to cut their phone lines quite yet.

Obviously the iPhone has been killing it. Though the latest release was an ‘S’ iteration and doesn’t count as an entirely new device, the phone managed to outsell its predecessor by around 4 million units. Within three days of launch, 13 million 6S and 6S Plus units had been sold – a new record for the brand.

In contrast, the Nexus has been treading financial waters. Google admits it has been taking a bit of a hit from stagnant sales and a profusion of competitors. Most recently, the company’s Q1 revenue sheets showed a decline in ‘other revenues’, which is the category under which Nexus devices are filed.

It makes sense to wonder why Google hasn’t pulled the plug on The Nexus, but looking at it from a different angle, there are actually a few good reasons.

The Nexus plugs into Google’s larger program by being the showpiece for Android in its original form. We love complaining about the bloatware that comes installed on phones. Some manufacturers like to build skins over the vanilla Android interface. Even if you’re a fan of the customizations, it’s only possible to make a fair comparison when you have a chance to take a look at what the experience is like minus the modifications.

And it isn’t just a matter of cosmetic aspects of the experience. Nexus phones also exhibit feature updates that roll out in conjunction with new hardware. Consider the new Sensor Hub that Google introduced recently. It monitors movement and runs complex activity-recognition algorithms using dedicated processors. If it was up to the OEMs, it’s possible the feature gets overlooked due to the investment it would take to incorporate it into their own phones. But with the Nexus series, Google shows the market the potential its software has with mid-range hardware specifications, and then throws the gauntlet to OEMs.

In this way, it’s much easier for us buyers to gauge what we’re being offered by OEMs when their wares can be compared against the pure Android experience. 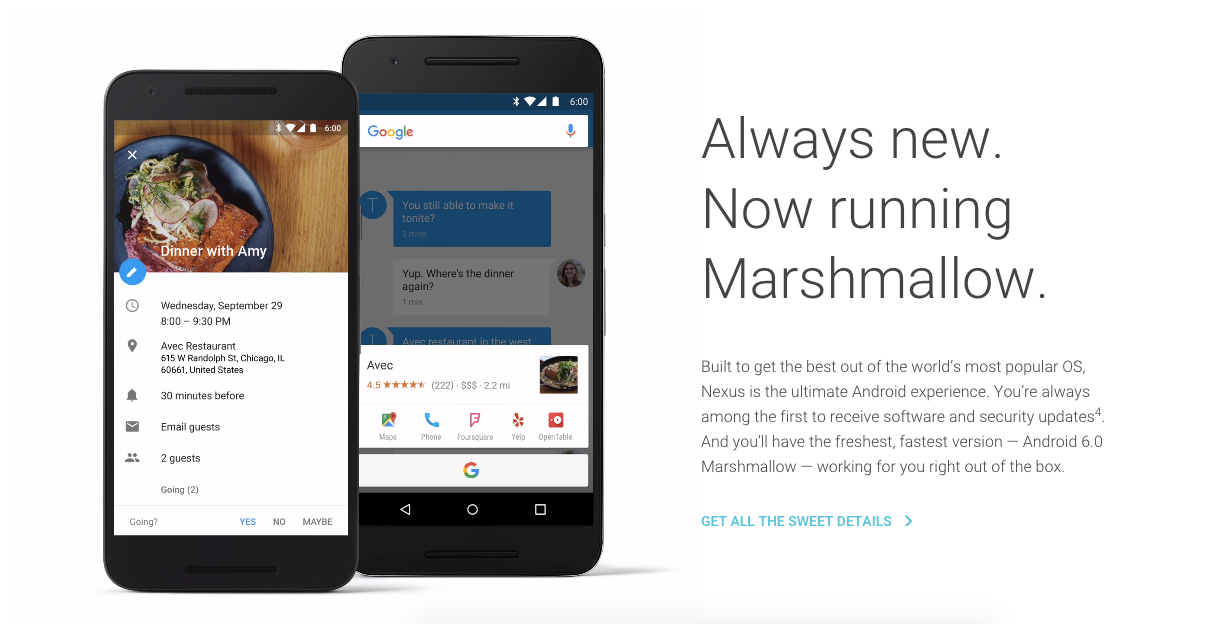 One of the fundamental differences between iOS and Android is that Android is (mostly) open-source whereas iOS is (mostly) closed-source or proprietary software. This oft-parroted fact is an indication of how each company approaches its eventual goal of market domination.

Only Apple can build iOS devices. Therefore, if Apple is to get its creations out, it needs to do so by putting their devices in customers’ hands. Google, on the other hand, chose to make Android primarily open-source software. As a result, it doesn’t need its own hardware to act as a significant product channel.

In fact, it would be counter-productive for Google to market its mobile devices too aggressively and try to crush the competition. They use brands like Asus, Samsung, and LG to highlight the versatility of its smartphone OS. While Google would certainly like to sell Nexus units in greater volumes, they wouldn’t want to threaten the reach their operating system has through hardware built by other manufacturers.

The Nexus series is what consumers need in order to know exactly what Google’s intentions are with the Android ecosystem. It defines the standards and puts the updates on exhibition so there’s a clear direction for not just the software but devices in their entirety. Though there are a number of points over which the brand might compete with Apple tooth and nail, the Nexus series doesn’t need to be one of them.