If you play the electric guitar, you know that lugging a guitar amplifier, cables, distortion pedal, power outlets, and various other paraphernalia around can be quite the workout. If you’ve been thinking there has to be an easier way to jam on the move, what you’ve been hoping for is the JamStack.

If you thought the mini amp Jack Black’s character carried around in School of Rock was handy, JamStack would probably blow your mind. The device is an attachable amplifier that fits right onto the body of any electric or bass guitar (as long as it doesn’t have a Flying V style body) and weighs just under 2 pounds. Not only is the amplifier extremely portable, but it also links to any smartphone to make mixing in effects and backing tracks a breeze.

Founder Chris Prendergast details the origins of JamStack saying, “I first built a custom guitar, by drilling a bunch of holes and inserting a speaker and smartphone mount.” Following that experiment, the idea for something a little easier to integrate with a guitar took root. “I had a second epiphany and realized you could use a portable speaker and make it modular.” 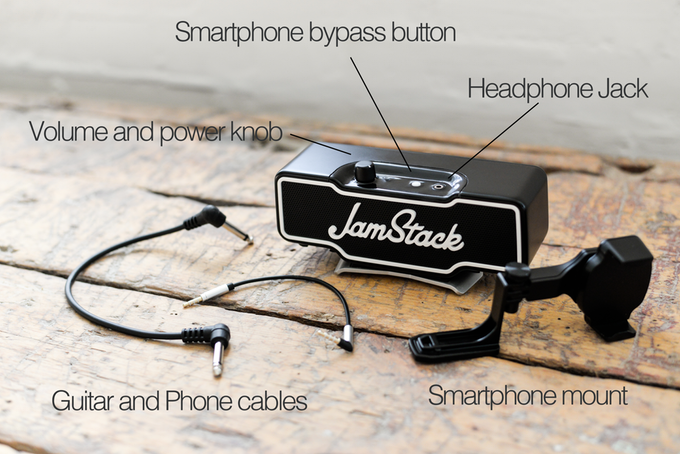 In its final form, the JamStack has three main components: the amplifier and speaker, cables to connect with the guitar and phone, and a smartphone mount. The simple process of setting it up involves attaching the device to the guitar’s strap button and then connecting it to the guitar’s output as well as a smartphone. The smartphone is on there so you can work with different loops and effects using apps such as AmpKit and AmpliTube.

Apart from all of those things, JamStack can also act as a wireless Bluetooth speaker. It lasts over 8 hours before needing to be topped up.

JamStack’s Kickstarter campaign late last year was a smash hit, having raised $61,000 from over 350 backers. “The Kickstarter raised more than 325% of the goal, which allowed us to get the design we had ready for manufacturing, and work with engineers to start tooling the factory overseas,” Prendergast explains. 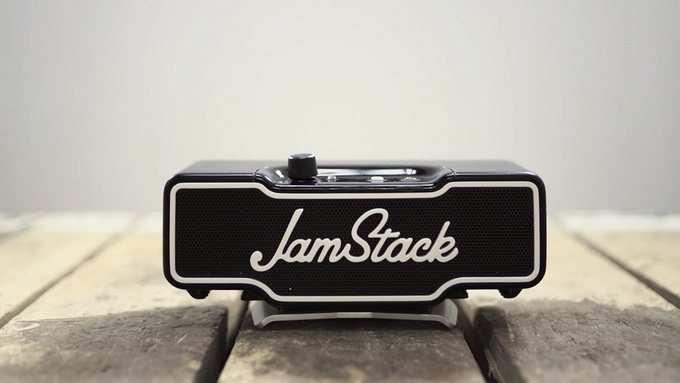 Some of that Kickstarter shine rubbed off on the brand’s efforts outside of crowdfunding. “Without any ads, we’ve been getting about 30 people a day signing up for the next round of pre-orders on the JamStack website,” says Prendergast. He tells us partnerships with distributors are in the pipeline, as well as direct-to-consumer sales online.

Given the rousing reception on Kickstarter, JamStack will fulfill a crowdfunding encore, this time on Indiegogo. The campaign is set to go live April 18 and will raise funds towards a larger manufacturing run. In the meantime, Prendergast will make a pitch at Canadian Music Week’s Startup Launchpad as well as an appearance on Dragons’ Den, a show with a format similar to Shark Tank.