For years we’ve dreamed of having robots in our lives.

The Jetsons had Rosie the Robot to wait on them hand and foot. The technically inept Rocky Balboa gave Paulie a robot as a present. Wall-E won our hearts with his delightful innocence, and R2-D2 and C3PO are definitely a few droids we’d all love to have by our side.

In recent years we’ve gotten closer to a robot reality with digital assistants like Siri, Cortana, and Amazon Echo able to give directions, send emails, and play music for us. But despite all the progress, we still don’t have robots that can truly operate at the center of our lives – robots that can be, well, our pals.

Jibo wants to fill that droid-shaped hole in our hearts.

Jibo, which is both the name of the company and the robot they are building, started as a project on Indie GoGo that when all was said and done, was the “#1 Most Successful Technology Campaign on Indiegogo in Summer 2014; it raised a jaw-dropping $3.7 million for the “World’s First Social Robot For The Home” – 2,288% above their goal. Since then, the company has gone on to raise another $38.6 million in funding with a recent round of Series B sealing up an “undisclosed amount” just last week.

Jibo claims that the robot can, and should be part of your family.

Jibo certainly has some really cool features. It uses two high-res cameras to track faces, capture video, enable immersive video calling, and recognize various members of the household. The robot also swivels toward the sound of your voice when you address it, making it seem that it’s hanging on your every word. It can also interact with you, remind you of tasks and appointments and using sound effects, graphics and physical movements, provide a fun, responsive and supportive “storytelling experience”.

The question is, is that enough? I want more from a personal robot than reminders, video calling, and interactive storytelling. And at $749, I think it’s fair to expect more given what’s already out there.

Right now, most of Jibo’s momentum seems to be coming from what the company says it will be able to do. On the blog, the company offers this list of future Jibo features: 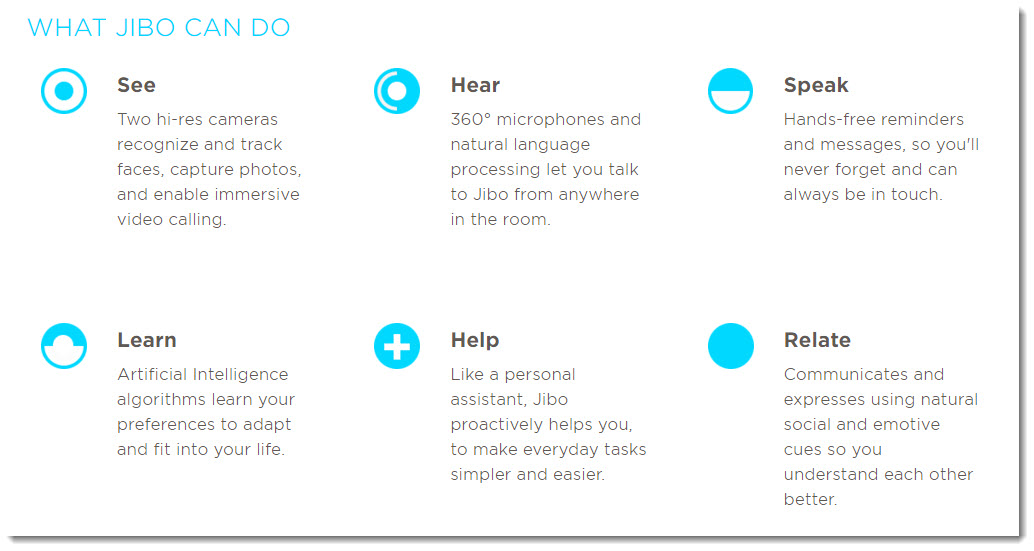 Right now, however, Jibo seems like little more than a souped up version of Siri, albeit in a more droidy “maybe I can pretend it’s a little person” kind of body. It has a few more bells and whistles, but in terms of core functionality it doesn’t seem a whole lot better than the “alternatives”. And while their positioning currently spreads them as catering to all of adults, teens, kids and seniors, they will likely need to focus on only one or two of those if they really want to hit it big.

Or maybe not. Japan’s robot-run hotel is looking like more than just a proof-of-concept and Pepper, the Japanese robot “with a heart”, sold it’s 1,000 unit launch inventory “immediately” this past summer – at about $1,500 a pop.

All of Jibo’s available pre-order units are also sold out. If you want one, you’ll have to join their waiting list.