If you’re an app user in the US, some research will tell us that when you pick up your phone, there’s a 90% chance you’ve picked it up to use one of your apps.

But before that leads us to sound the death knell on the mobile web again, there are some additional numbers to consider.

A report published by Flurry in early 2014 spurred much talk about the dying mobile web. The study considered time spent on apps and mobile browsers as the primary differentiating factor. Things haven’t changed a lot in 2015 with respect to that particular metric. According to a recent report by comScore, app users are a lot more dedicated to their preferred medium than web surfers are, with the group spending about 90 percent of their mobile time using apps. While this finding does tip the scales in favor of mobile applications, it turns out there’s also evidence to back the contemporary value of a browser-based experience. 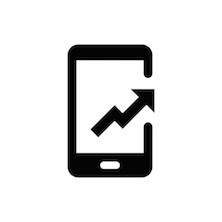 Apps find a way to keep users hooked, but the mobile web has much greater reach than its competition. comScore’s report reveals that for the top 50 web properties, the audience size on browsers is double of that on mobile applications. That audience has also grown 1.2 times faster in the last 3 years. Only 12 of the aforementioned 50 entities have more users on their mobile apps as compared to their browser-based app.

In its entirety, the study indicates that while a web presence may not earn publishers and brands as much time as they’d like with users, they’re given access to a much larger audience.

Primarily, this is a consequence of many users viewing mobile as a natural extension of the desktop. People who access Facebook through their desktop Chrome browser are likely to stick to that method on their phones, unless they’ve been presented a compelling reason to download the standalone application.

The problem with apps

Even if users are convinced of the benefits of a mobile application, it doesn’t immediately result in a download; bandwidth and memory constraints often get in the way.

Manufacturers have been steadily inflating smartphone memory sizes. With even mid-range devices boasting large internal memories, offering additional memory slots and cloud storage in many cases, our phones are a lot roomier than they used to be. But as most users are well aware, that storage space, no matter how prominent it is to begin with, has a weird way of getting really packed really quickly. Eventually, adding one more app to the existing repertoire becomes a carefully considered move.

Mobile apps are also notoriously sneaky bandwidth consumers. Updates generally come thick and fast and many connect to the Internet stealthily to move information to and fro.

From a developer’s perspective, apps are both hard to build and tough to promote in tightly policed marketplaces. It is almost impossible for independent developers to consistently build and maintain apps for Android, iOS, Windows, and other mobile operating systems. Even if they do, there are then regulations and licensing fees to get around in each environment.

With comScore’s research showing that people spend about half their app time in just one application, acquiring users for new stand-alone products is become increasingly arduous.

These factors, along with the fact that most mobile applications have well-equipped online alternatives, have combined to siphon a lot of smartphone users to their browser instead of app stores.

Since apps require Internet access for downloads, updates, and information interchange, and also take up space locally, it makes sense that a growing majority favors web apps over mobile apps. The web alternative doesn’t require installation, is accessible across platforms, and doesn’t levy bandwidth expenditures on users during updates.

However, where mobile apps could gain an advantage, and a pretty sizable one at that, is offline.

The web community is yet to crack the code on how to enable use of their applications even when an Internet connection may be temporarily unavailable. There are solutions in the fray but a robust workaround isn’t available yet.

If mobile applications are to catch up with the userbase that web apps have, offering an offline experience comparable to online would be the start. Both Google  and Facebook  are putting a great deal of thought into the offline capabilities of their apps, so it won’t be long before others follow suit.