Take a look around, and you’ll notice that the number of options we have to communicate with one another is growing year after year. Just think about the abundance of chat app options there are.

But as far as we’ve come in closing the physical gaps that separate us from close friends and family, there are still obstacles that stand in our way as we use these newer forms of communication. There’s the tech savviness factor to consider, especially when trying to communicate virtually with older adults. There’s also the inconvenience factor of having to hold or carry around a device as you try to carry on a normal conversation.

California startup OhmniLabs has developed a solution to the problem, and it comes in the form of a home robot—named Ohmni—that people can use in their homes to communicate with others, near or far. This robot has been a work in progress since 2015, has gone through nine iterations, as well as a full-year of beta-testing.

Their IndieGoGo campaign is set to end in May of 2017, at which time they’ll have exceeded their original goal to raise $100,000. (As of writing this, Ohmnilabs has reached 106% of their crowdfunding goal.) The plan now is to make the Ohmni robots available starting this fall.

The idea of bringing a robot into the home for added convenience in chatting with one another is not new. Companies like Beam and Double have previously created a similar product. When asked what makes Ohmni so different from the competition, Jared Go, the co-founder and CTA of OhmniLabs said:

“Driving around Beam and Double and interacting feels a lot like walking around with a neck brace on, which results in unnatural interaction. We studied this and notice in a lot of cases people will bend down or adjust their pose to look flat into screen, because the screen and camera can’t orient to look straight at them. People say that it’s really the moving neck that makes the product feel really human… Being able to emote and nod too really gives the extra oomph to that feeling.” 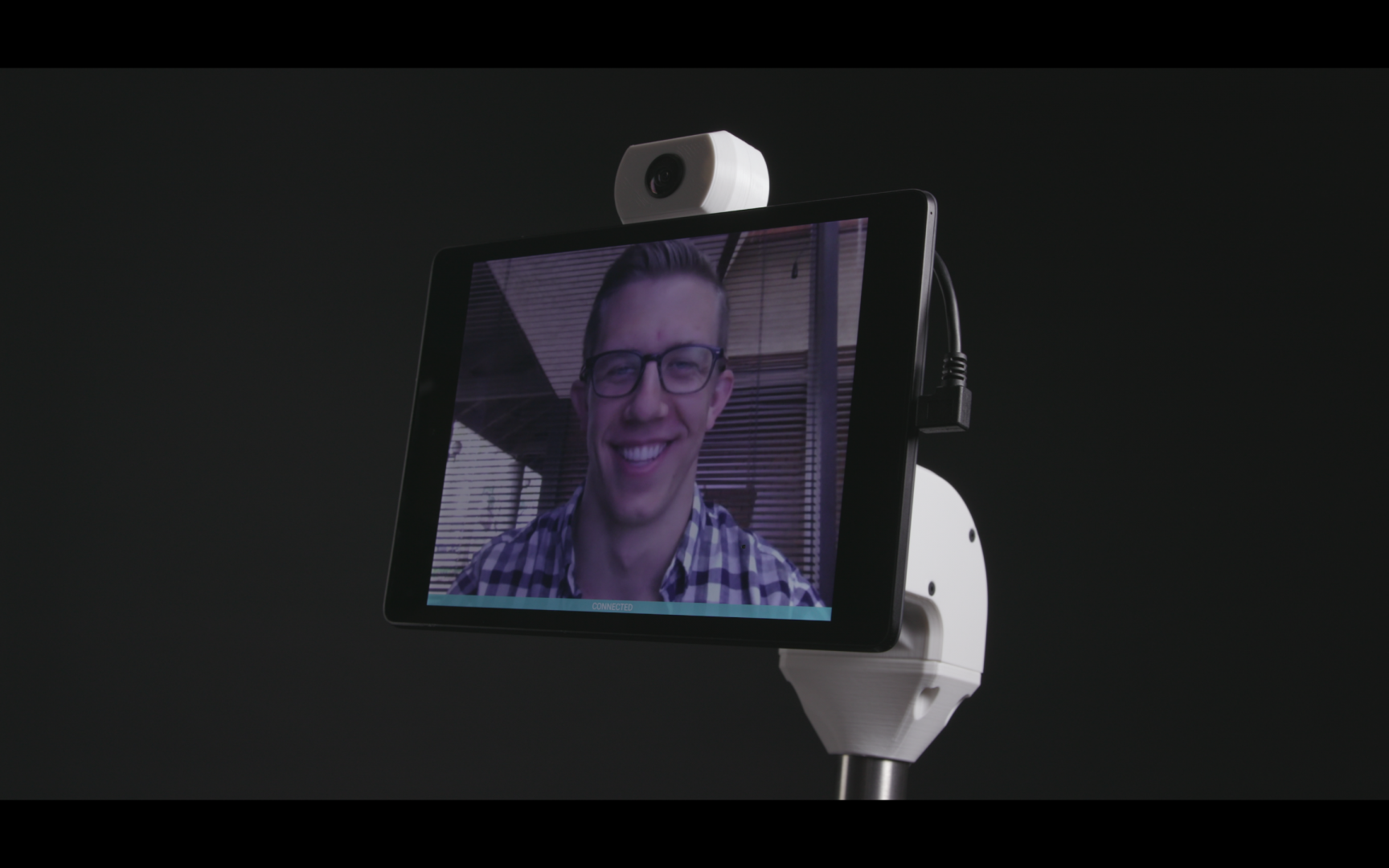 OhmniLabs’s Lead Engineer, Mark Edstrom, elaborated on the unique promise of their product as well:

The movable neck is just the start of creating that hassle-less experience. Setup has proven to be just as convenient, too. All it takes is a quick unfolding of the unit, a click of the power button, and then connecting to Wi-Fi. Although users from the robot’s end cannot initiate calls themselves, all they need to do is grant access to family or friends and accept the call when it comes through. Users can connect by email, Facebook, or Google and then use their computer’s or Android phone’s Chrome browser to connect.

OhmniLabs Aims to Revolutionize the Way We Communicate

The Ohmni robot has a lot of great selling points. The moving neck is one of them. The easy setup and Internet connection is another. It also happens to be lightweight and whisper-quiet, so it doesn’t leave much of a cumbersome or noisy presence around your home.

One of the use cases OhmniLabs has found to be particularly welcoming of their robot is with the senior population. They’ve already tested the Ohmni robot out in a number of homes and have received extremely positive feedback from users.

According to Minnesota-based tester Ping Yeh, the Ohmni changed the way he was able to communicate with his California-based family. 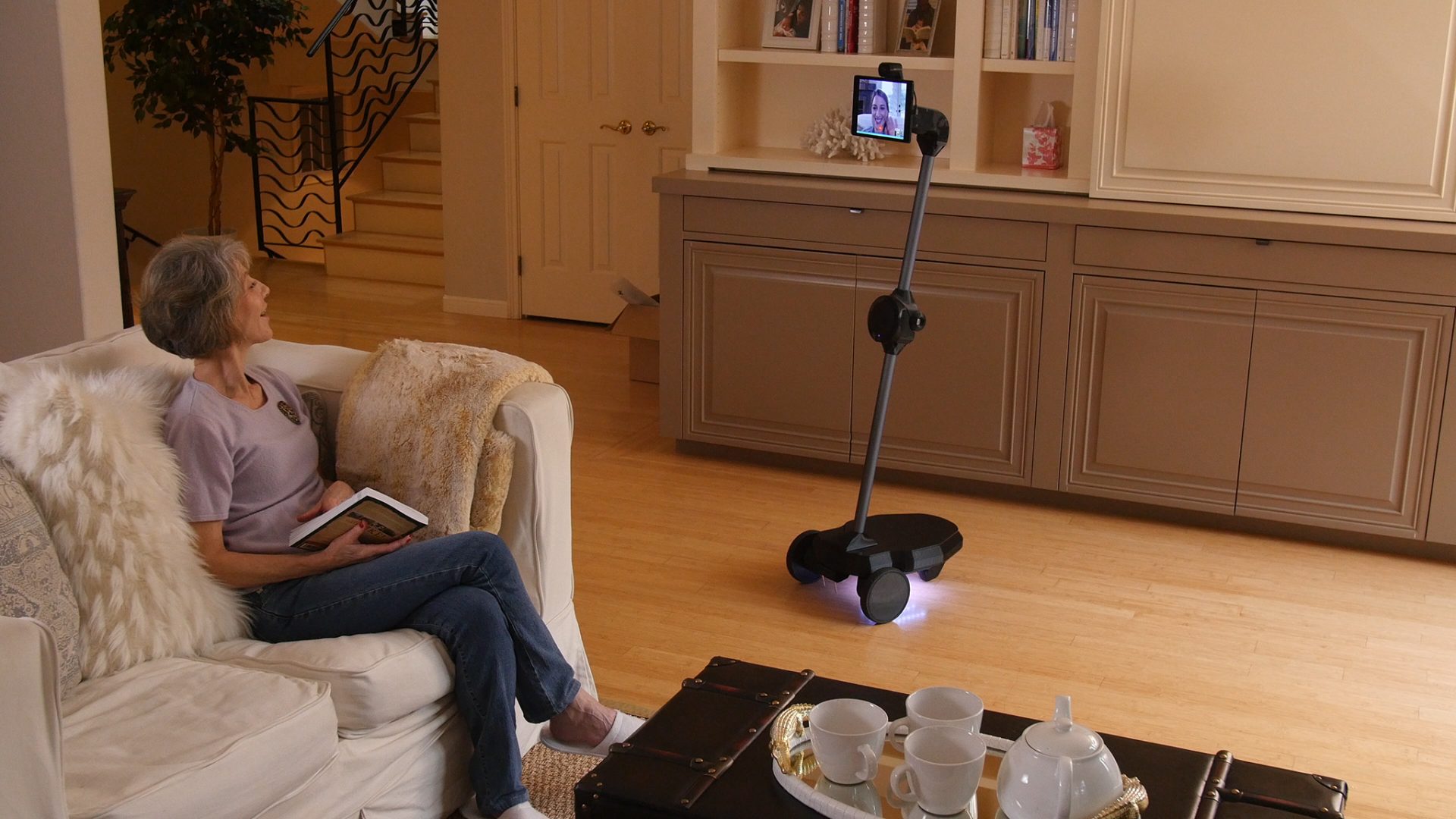 It’s this added convenience that may be what’s making the higher price tag ($1,399 while the IndieGogo campaign is live; $1,899 after that) on the Ohmni robot one that’s easier to swallow.

In addition to the positive response OhmniLabs has received from the test run of their robot, the company’s co-founder, Thuc Vu, has put it to use in communicating with his own family: “FaceTime isn’t satisfying enough. I would drive into the kitchen and talk with my grandma making a meal, or drive to the living room and watch TV with my dad or watch my mom playing piano. It’s an amazing experience. We want to open this up to everyone.”

The Future Is in Robotics

OhmniLabs has already done a fantastic job in setting their home robot apart from the competition by providing a truly intuitive and hassle-free way for distant friends and family to communicate. In addition, they manufacture all of their robots in-house, building them with materials like brushed aluminum and bamboo. They’ve also developed the Ohmni as an open source platform that encourages developers to adapt and build onto their platform through their OhmniAPI.

The company currently has plans to take their robotic communicator another step further by adding arms to the Ohmni. It is their hope that, in doing so, remote users can control more than just the movement of the head or the mobility of the body of the robot. They want to give them the ability to interact with objects in new ways. We’re excited to see if the company can pull this off in the five years they project it’ll take them to do so.