In this day and age, seeing a child under the age of 10 knowing how to adeptly use an iPad and doing so on a regular basis isn’t typically a cause for shock or awe. However, despite the rapid adoption of technologies like smartphones, iPads, and computers by adolescents, there is still a general concern that maybe it’s too much, too soon.

In a 2016 survey conducted by the Erikson Institute and the Technology in Early Childhood Center, they found that “while embracing the benefits of technology, parents also expressed significant concerns about too much screen time (72 percent); inappropriate content (69 percent); and commercial messages aimed at young children (66 percent).”

Parents aren’t the only ones thinking about how much of the benefits of this technology outweigh the drawbacks. Palo Alto-based Tangible Play Inc.’s founders have been working hard since 2013 to develop “‘something awesome that inspires the youngest generation,’ while at the same time addressing a concern of many parents about how to have their children interact with technology without losing the value of hands-on play.”

The Osmo toy line is already well-known by parents, educators, and others looking to improve how children interact with their iPads for educational and entertainment purposes. In addition, they’ve been awarded by companies like Good Design, Time, and Fast Company for their cutting-edge technology that encourages hands-on play in the digital age.

Osmo Coding Jam takes the basic idea behind their toy line and puts music in the hands of children. The catch here is that to create music using the Osmo base (which attaches to the iPad), they need to figure out how to code the music using a set of blocks.

In the goofy promotional video below for Coding Jam, you’ll notice that they put a heavy emphasis on how fun it is to use this toy to make music. But pay attention to what Bailey from Osmo says around the 0:21 mark:

“They’re making customizable tracks of music on their iPads. But, not just that, they’re using these blocks to make it with code, so they’re learning coding while making music.”

Their ultimate goal with this toy then is to merge creativity and coding into a shared experience, something that isn’t typically seen in education that tends to keep the Arts and STEM separate. In so doing, Tangible Play has created a toy that truly promotes creative problem-solving skills.

With kids already so familiar with the technologies found around their homes and schools, and with regular exposure to movies, TV, and video games, it makes sense that companies like Tangible Play would want to take those sources of entertainment and education to the next level with augmented reality.

Osmo Coding Jam works just like their other toys. Once the iPad is placed into the Osmo base, the child’s tablet becomes the tool by which they can both learn and play. The only thing remaining is the red “Reflective Artificial Intelligence” tool that gets placed atop the camera. This is how the Osmo software can see which blocks the children place into the area in front of the iPad.

As each block or layers of blocks are laid down, characters on the screen play the corresponding sound. With 21 musician characters with corresponding instruments available to play with, along with the ability to save codes in order to create repetitive patterns and layers, children can create seemingly limitless musical arrangements.

The Osmo toy line and the soon-to-be-released Coding Jam are used not only at home but “has been adopted in over 22,000 schools in 42 countries around the world. Teachers are raving about how their students love experimenting, exploring, creating, and collaborating with Osmo.” 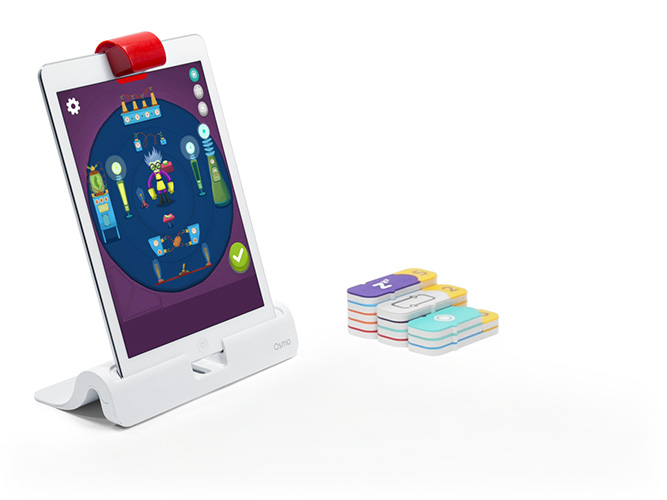 When Coding Jam goes live later in May 2017, it’ll sell for $59. For parents that don’t already own any Osmo toys, they’ll need to purchase the base for $19 as well. The cost of which should be negligible to parents who want to give their children a fun and intuitive way to merge their interest in art with their love for using the iPad.

In addition, toys like Osmo Coding Jam empower kids to learn how to code their way to success early, a skill that’s in top demand according to Fast Company, “As a result, coding has become a core skill that bolsters a candidate’s chances of commanding a high salary.”

Regardless of what the end goal is—giving kids a fun way to create a piece of art, or learn an invaluable skill—companies like Tangible Play and PopUp Play seem to be on the right track with their merging of technology and play.