Let’s talk about something ludicrous (other than the rapper).

NCAA college athletes, who use their blood, sweat, and blown ACLs to generate billions in revenue for the NCAA, cannot be paid for their services. These athletes cannot hold jobs. They cannot sell their jerseys in order to make some cash on the side. Those who try to skirt these rules are suspended and their teams are massively penalized (see Terrelle Pryor, Reggie Bush, etc.).

College athletes are willing slaves of “The System” and despite years of practice and sacrifice, 95% of them will never play past the collegiate level.

The debate will continue to rage over whether college athletes should be paid, but in the meantime, a company called “Play For” wants to offer a middle ground of sorts. This startup, which is currently raising funding, is trying to bring crowdfunding to student athletes.

The case of Ed O’Bannon vs. NCAA found that universities can set up trust funds for college athletes valued up to $5,000 per year of eligibility. In other words, if a student plays 4 years of football, his university is legally able to set up a trust fund for him of $20,000. This trust fund is released to the athlete upon graduation.

Through their site, Play For is enabling fans, through crowd-funding, to contribute to those trust funds. 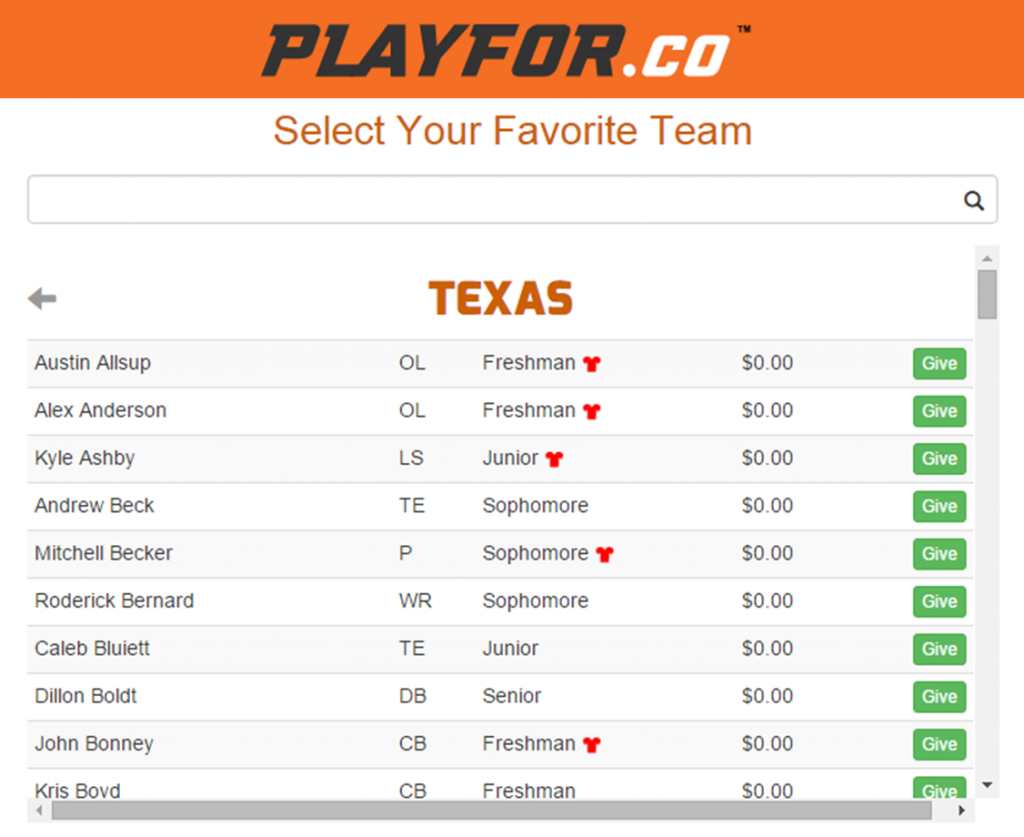 For example, Dalvin Cook is a massively popular running back at Florida State University. Play For allows fans (like me) to easily contribute to Cook’s trust fund through their site. Whereas previously it would have been illegal for me to give money to Dalvin, now I can contribute to his legally approved, university-sanctioned trust fund.

And here’s a great kicker (pun intended): if Cook’s trust fund grows larger than $20,000 ($5k x 4 years), the extra money will be evenly distributed among his teammates.

Theoretically, if they don’t make it all the way, these trust funds would be used after graduation to help student-athletes transition into “real life”.

Unfortunately, I do see a few issues with Play For.

First, the athletes who are most likely to be crowdfunded are the least likely to need it. Dalvin Cook will, almost without question, be selected in the first round of the NFL draft. He will need exactly zero financial help transitioning into his post-college life. But what about the mostly obscure FSU track stars.? Will they get crowdfunded? They’re the ones who need it most but I doubt they’ll see any money come their way.

Second, the NCAA has a long and illustrious history of destroying athletes who “took money”. Granted, this is different, but when you start meddling with cash and the NCAA, you’re usually skating on thin ice. By putting itself squarely in the aggressive crosshairs of the NCAA, Play For may become a target of some very expensive litigation.

As you can probably tell, I’m all for finding ways to appropriately compensate student-athletes. They give up years of their lives and get very little in return. But I’m not sure if crowdfunding is the solution. The risks seem high and I’m not convinced that the model will get the funds to those who need it most.