In just three months since its launch, Pokémon GO has already extended itself into more than just gaming. The augmented reality sensation has evolved into a whole Pokéverse where the Norwegian Prime Minister is caught playing Pokémon in Parliament; where PokéScience is treated like a real science; and where Pokéanatomy is the sweet spot where pop science meets pop art. The game has also found its way into the course curricula of at least two Poké-Pioneering universities; the University of Idaho in the U.S. and the University of Salford in the UK. 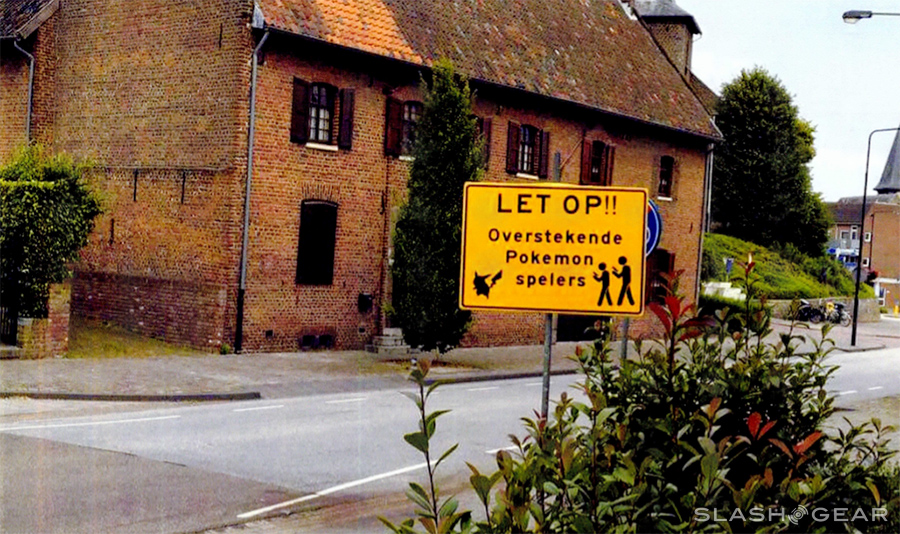 Putting The “Phun” Into Phylogeny

Matan Shelomi is a Postdoctoral Research Fellow at the U.C. Davis at the Max Planck Institute for Chemical Ecology. He is also the author of A Phylogeny and Evolutionary History of the Pokémon. At over 200 reads, the publication is his top paper on Research Gate, a social networking site for scientists and researchers to share content, ask and answer questions, and find collaborators. Reading the abstract, it becomes clear that Matan is injecting some “Phun” into Phylogeny—you start to get a feel for how Pokémon is capturing the imagination of both the general public and academics alike:

With the phylogenetic and evolutionary relationships of the kingdoms Animalia, Plantae, and Fungi mostly out of the way, attention is now turning towards the Monstrasinu, commonly known as “Pocket Monsters” or “Pokémon” for short. Starting from the 151 original “species” described by Japanese scientist Satoshi Tajiri in a 1996 monograph, Pokémon science today continues to be a rewarding field for taxonomists. Every three to four years, several new species are discovered and described almost simultaneously. A total of 646 Pokémon have been described, most of them in Japan.

And where there is science, there is the need for cool diagrams and visual learning. Christopher Stoll is a “PokeNatomy” artist. He has created a series of stunning illustrations that reads more like a fun biology text book than it does the liner jacket for a video game case. It’s a layer of engagement, and information, that makes the profound impact of the game almost impossible to deny, and perhaps even impossible to resist. 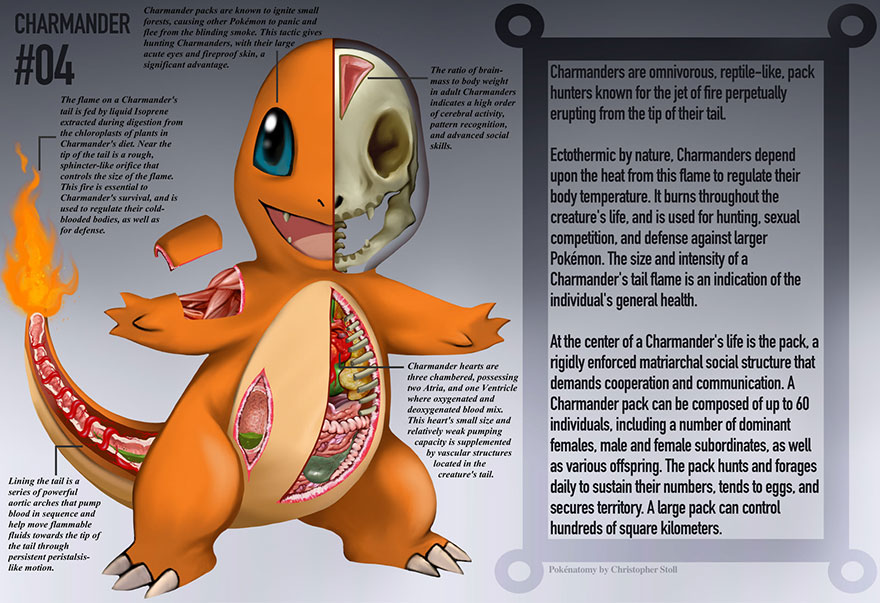 “I’ve been very surprised by the reception to my Pokémon anatomy art,” Stoll told me. “And I think there’s a lot of interest in viewing popular culture through a scientific lens. I still receive weekly requests from teachers all over the country to use my illustrations in their classes.” But science is just the beginning of the Pokémon penetration into the field of education.

This past September, Pokémon GO made its first appearance in the curriculum of a university course; in a physical activity class, Pop Culture Games, at the University of Idaho. Steven Bird is an instructor in the Department of Movement Sciences at the University of Idaho and he created the course. ”We got a lot of recognition for being the first to do something like this,” said Bird proudly. “And I’ve had a lot of universities, both nationally and internationally, reach out to ask how we developed our course so that they can look into offering similar courses.”

Steven is extremely pleased with the internal reception of the course since putting the Pokémon GO component front and center. “To start, we initially had 27 students sign up for the course,” he explained. “However, this being before their orientations, and after adding and dropping courses for their degrees, the final enrollment was at 18 students. This is a much larger number than the original 6 who had signed up before the course was Pop Culture Games!” 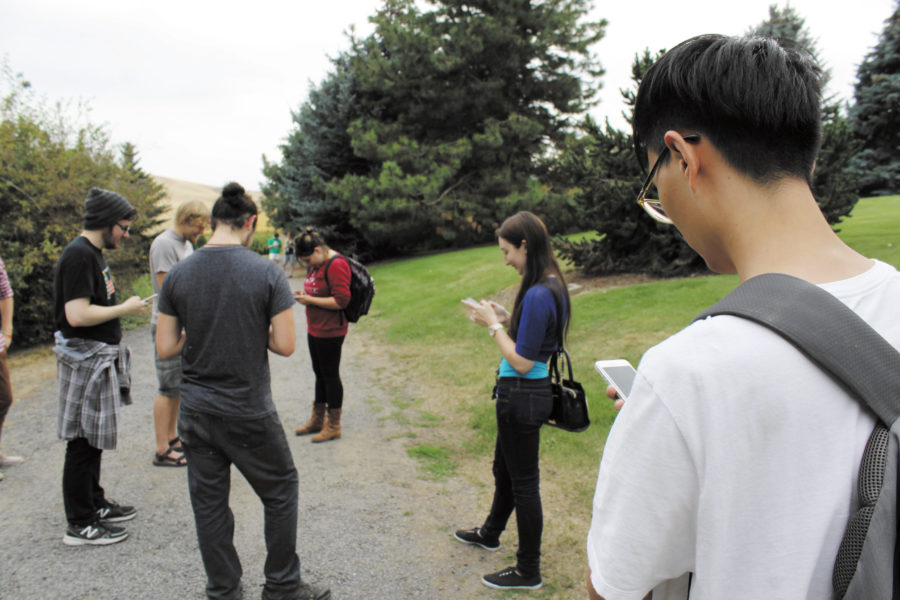 “At first I was a little hesitant about the course, but it was received with the utmost respect and wonder,” Bird enthusiastically described. “My students were thrilled to be playing Pokémon GO during the class, being able to walk around, explore the campus and downtown Moscow, as well as learn new things about Pokémon GO.”

Of course, there is more to the curriculum than just fun. “The course has shown how we can use Pokémon GO to teach leadership, physical activity, and form relationships,” said Steven. The reception has been significant enough that they have added on a second quarter class and will continue with the course through to the end of the year.

The course costs $40 and students must have a smartphone and data plan. Appropriate gear to be outside in Idaho in December is highly advisable.

Salford University in the U.K. has taken a somewhat different approach. Salford expects that appropriate interaction with the game will make its business information technology course more “accessible.” Critics have claimed the move is indicative of the dumbing down of degrees, and that it encouraged students to rack up huge debts on courses that opened up few (if any) job prospects.

The Salford lecturer behind the course, David Kreps, is quoted as denying this, saying, “While we will be asking students to play Pokémon GO, it will get a little more complicated,” and that, “It uses various information systems that are accessed over the internet, a digital camera and a GPS location sensor.”

Just how stalking a Snorlax or snagging a Sandshrew will make a business degree more “accessible” is not yet clear. The fee to “catch ‘em all” as a part of your business degree? According to one publication, you can expect to pay around £9,000 for the entire experience.

Is This Monster Getting Away From Us?

Courses, not all for degree purposes, are spawning faster than the pocket monsters themselves. Below are just a few examples:

The University Herald has chimed in on the debate of the legitimacy of offering Pokémon GO as a part of a degree course:

“Salford and Idaho University students might have the time of their lives mixing fun and learning but the efficacy of the game in making an impact on how students learn is still debatable. This might call for thorough study and observation for Pokémon GO to be truly embraced as a legitimate course requirement.”

Ah, the classic, “Needs More Research” response. They should definitely design a course focused on researching the educational benefits of integrating Pokémon GO into educational curricula. Personally, I’ve been itching for a way to combine my Ph.D. with my Level 30 Pokémon GO obsession. I may not be done with school after all.