Last week, the White House released a plan to spur the development and availability of smart gun technology—tech that would make it impossible for anyone but a gun’s authorized user(s) to pull the trigger. While there is some ambiguity regarding the precise definition of a “smart gun”, authorized-only firing is a universally agreed-upon component.

The response from many has been…erm…less than pleasant. This shouldn’t be too surprising; the Magna-Trigger has been available since 1976 but failed to achieve widespread use due at least in part to resistance from the gun lobby.

There are, perhaps, some legitimate arguments to be made about onerous manufacturing requirements and lack of consumer choice should smartgun technology become required for all firearms. But there’s also a very vocal faction in this country that gets their knickers in a cartoonishly-outsized twist when they feel the convenience of putting bullets in stuff is under threat…but more on that later.

For now, let’s set the politics aside and look at some of the tech—and companies—that might mean the future of smart gun technology.

German company Armatix was one of the first to hit the market with a modern smart gun. Its iP1 Pistol is automatically deactivated whenever it’s out of range of its companion wristwatch’s RFID signal. If the gun is stolen or dropped in a scuffle, it’s useless as anything other than a paperweight. Or a bludgeoning weapon roughly the weight of a paperweight. Or an anchor for a very small boat…

The point is, it won’t fire bullets unless the hand holding it has the watch on its wrist. As long as you keep your watch secure, your gun and the people it’s being pointed at are safe. Yay!

The iP1 isn’t the easiest gun to come by, though. At least one gun store owner received death threats when he tried to carry it shortly after it came out in 2014. He backed down (though he did cite the irony of the situation). New Jersey, which passed a law in 2002 requiring all guns to have a safety feature preventing children from pulling the trigger once such technology was developed, decided—amidst much furor—that the Armatix didn’t meet its criteria and the law would remain in limbo. 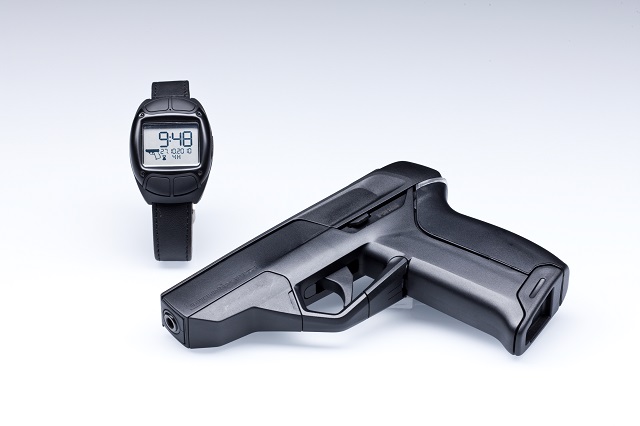 There are clear limits to this gun’s smartness; anyone who gets the watch can fire the gun, so it really isn’t user-specific.  Also, the fact that this gun comes from the German fatherland probably isn’t doing it any favors among the less cultured, Teutonic engineering prowess obviously notwithstanding. So what about some good old (or new) American options?

The New Jersey Institute of Technology

OK, they’re a school, not a company, but spurred by the 2002 legislation and the funding that came with it, researchers at the NJIT were able to develop a biometric grip to identify specific users. A series of piezoelectric sensors measure hand size, grip strength, and other unique elements of a “grip signature” to determine who is holding the gun.

Firing isn’t enabled unless it recognizes an authorized grip.

Early prototypes of the NJIT’s Dynamic Grip Recognition had 90% accuracy…back in 2005. Since then, there’s been barely a peep. In a sort of catch-22, the same law that prompted funding for this research is probably playing a big part in preventing that research from reaching the public. Three years after acceptable smart gun technology comes out, every handgun in New Jersey will have to have it…and the NJIT is a public university dependent entirely on government funding… 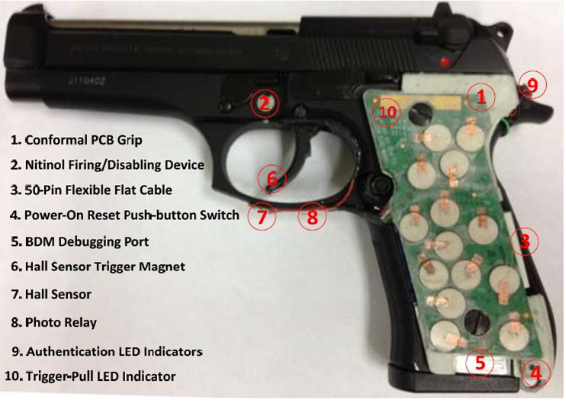 I’m really not a conspiracy theorist, but this is so transparent it’s like looking through bullet holes.

With the private market under attack and government-funded research unlikely to soon see the light of day, who can we turn to? Why, the young millennial entrepreneur, of course!

Formerly the 18 year-old founder, CEO, and sole proprietor of apparently-defunct Ægen Technologies, Kai Kloepfer developed a fingerprint-reading gun grip that works just how you’d expect. If it doesn’t recognize the fingerprints as those of an authorized user of the gun, the gun won’t fire.

Kloepfer claims a 99.99% accuracy rate when it comes to preventing unauthorized users from firing, and only a 2% false rejection rate (misreadings leading to an authorized user being unable to fire the gun). Of course, any false rejections at all is a non-starter for many gun rights activists, and to be fair that would be a concern in a self-defense situation—which is ostensibly what handguns are for.

But they have little to fear from Kai. His Indiegogo campaign was only 17% funded when it closed and he’s working all on his own – though you can still support his work with donations. Impressive tech, and an impressive entrepreneur and engineer, but this is one young white male who won’t be going public with a firearm anytime soon.

Yeah, I went there. If you want to lodge a complaint, write your state and federal representatives about better gun legislation first.