Mention snacks in compostable food packaging and the first thing that comes to mind is SunChips – the green Frito-Lay initiative to make the chips’ packaging out of biodegradable plant material, which had the unintended consequence of a reverse snack attack. The launch saw a huge consumer outcry that included an Air Force pilot describing the sound that the packaging made to be as “loud as the cockpit of my jet.”

After sales of SunChips tumbled following the introduction of the sustainable but extremely noisy “100% compostable” package, it was pulled from shelves, with Frito-Lay announcing that they would use the compostable bag for original flavor chips only. A new, quieter biodegradable bag followed and current bags are not labeled as compostable. I asked Frito-Lay to clarify if they are still compostable, just without the labeling. The Consumer Relations department replied saying,

“After lengthy consideration, Frito-Lay has decided to discontinue use of its compostable SunChips bag because consumer enthusiasm for composting was not at a level needed to sustain it.”

The Elephant in the Snack Room

Talk about a double-decibel-sized dumbo in the room. A multinational with a compostable package that crunched and burned does not provide an auspicious precursor for a startup with a dream of launching snacks in compostable packaging. 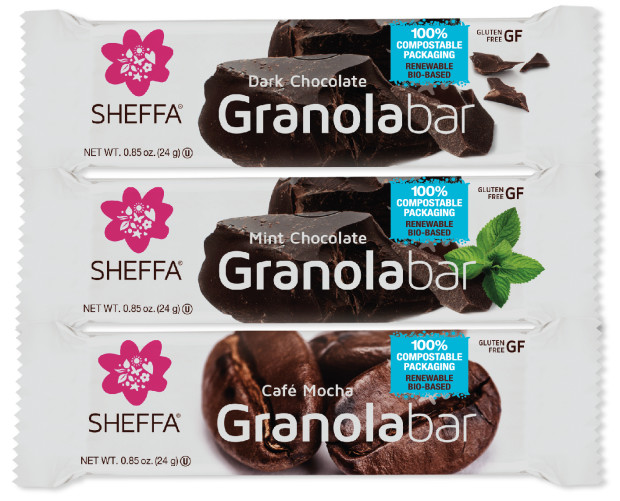 Sheffa Foods is not, however, your average NYC startup. Not with a self-described “fiery redhead” called Leslie Angle, whose humor is “on the edge of inappropriate,” and who went from being a personal assistant and a graduate of The Natural Gourmet Institute’s Chef Training Program, to co-founding the Sheffa along with research professor and fiber and polymer scientist, Amotz Geshury.

The company’s name comes from “Sheffa,” an ancient word for abundance. The company’s mission is to create delicious, authentic flavors from whole, unprocessed, natural foods, blending them to create “an exceptional balance of flavors, textures, and essential nutrients.” Unlike other products in this category, Sheffa Foods’ snacks tend to be savory rather than sweet, with unusual flavor pairings like sesame and poppy seeds combined with toasted onion and roasted garlic. At a higher level though, what Sheffa is really pairing is better-for-you ingredients with better-for-the-environment packaging.

“Better For The Planet” Indiegogo Campaign

In search of attention and funding that will allow them to grow into the mainstream and beyond what they have been able to organically accomplish so far, Sheffa Foods have just launched their “Better For The Planet” campaign on Indiegogo.

Says Leslie, “Crowdfunding is an opportunity for us to reach more customers than we already have. Because it’s kind of tell two friends, who tell two friends. Hopefully, it grows a little bit, more than say, if we just reach out to our customer base who order online or go to the stores who retail our products. Crowdfunding is a platform for us getting it out there.”

The company is looking to raise $18,000 through the campaign; in its first day, it has already pulled in over $5K.

The Search for Compostable Food Packaging

“Natural food products deserve packaging that is more natural,” says Leslie. “The devastating truth about most products we eat today is that the packaging creates a profound amount of waste. We don’t want to have to choose between our love of healthy, whole foods and our love for mother Earth and the planet anymore.”

“We as business owners and consumers have been longing for more sustainable packaging options.” says Leslie. “I guess in some ways we feel like, ‘The Little Engine that Could.’ We waited. We waited through the release of SunChips and it bombed. Every time we went to a trade show, we would ask. We would go to the packaging people and we would ask about the status of sustainability for flexible packaging.”

She continues, “We were very patient. We waited, hoping that the big people would pay for the development. The PepsiCo’s and the other people, because it does take money. A lot of money. And if the packaging’s not adopted, then it’s no good. You could have the best idea in the world, but if nobody uses it, or adopts it, or if nobody will pay for it – then, you’ve got a problem.”

Then, a dash of serendipity was added. As Leslie describes it, “By a strange set of circumstances we met the founders of TIPA, a biotech startup, who shared our vision for the future and we decided to work together to make our dreams come true.”

“They have the brains, we have the guts: what results is 100% compostable packaging made from bio-based materials,” says Leslie. “It decomposes in controlled conditions like a commercial composing facility in under 180 days. This new packaging material is real. It’s tested and it’s certified.”

It All Comes Together

By another strange set of circumstances, SnapMunk Editor-in-Chief Benjamin Mann was one of the first to profile TIPA, writing that “While there are a few other companies in the space – or at least a few that have tried to be in the space – TIPA seems to be have attained a significant position of technical credibility, flexibility and confidence that is likely required to push this kind of evolution into the mainstream.”

At the time, Daphna Nissenbaum, TIPA CEO and Co-Founder told Ben, “Talking to consumers, people don’t really know that flexible packaging cannot be recycled. They don’t understand that there’s a huge problem, and a growing problem – the amount of flexible packaging produced is growing 5% per year. It’s an issue that few people understand and that almost nobody talks about. It has no real ecological solution.” 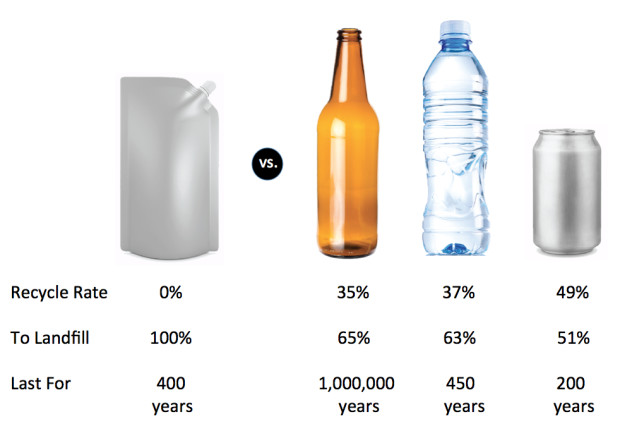 “TIPA comes with a high level solution for the entire supply chain to meet the demands of the entire segment and all its layers,” said Daphna. “We are also able to adjust our packaging to each individual food segment – for example, granola bars as opposed to potato chips.”

Turns out that with Daphna and TIPA, Leslie has found the compostable packaging that she was looking for. Let’s hope a lot more people find it too.