Either it’s been the theme of many Throwback Thursdays running, or the barter system is actually making a comeback. Whatever the barter economy lost in the Pokemon card trade when it was replaced by Pokemon Go seems to have been replenished by the emergence of services that let people swap houses, airline seats, and now, skills. talents and services.

Simbi is a platform where people can offer their skills as services in exchange for other users’ services or credits in the system. The credits can be redeemed at a later time for services being offered by the community. The result is a marketplace that is entirely cashless; the startup’s aim is to supplement (if not supplant) an economy built around salaries and their resulting hierarchies with a symbiotic economy in which deeds mean more than dollars.

It’s a lofty aim that might seem like a pipe dream, but Simbi has been vindicated by investors and users alike since launching its beta in January. The startup raised $1.2 million (yes, even barter startups need money) through a single round of seed funding in which Crunchfund, Ranch Ventures, and Greylock Partners participated. They’re also part of Y Combinator’s Summer 2016 batch. Y Combinator partner Dalton Caldwell believes Simbi has the potential to be huge, saying:

“Millions of people have useful skills others can benefit from but exchanging them with other almost always happens on an informal, small-scale basis. Simbi can be the key that unlocks all of that human potential.”

While investors are clearly impressed, it’s Simbi’s users that have really run with the idea. Just a few months since the beta launch, 15,000 services are now active on the platform. The community has taken full advantage of terms like “talent” and “skill” being open to interpretation, offering everything from professional voice overs to lullaby serenades and witchcraft advice. Most services are things for which many of us would pay while others are niche and maybe a little “out there”; the diversity is in the spirit of the marketplace. 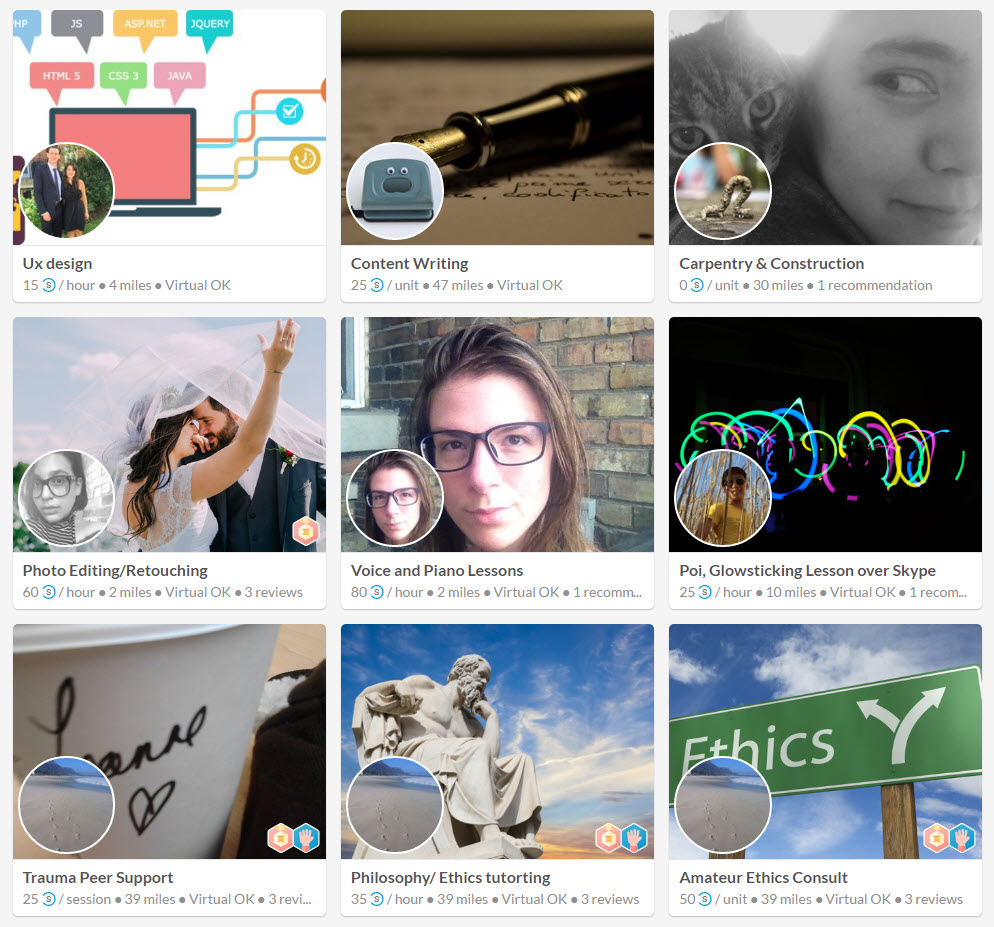 Although bartering might seem like an antiquated concept, it’s one that has been kept alive by a number of online services. Generally it’s goods that get traded, which is something services as old as Craigslist have been facilitating. Newer apps like Yerdle and Listia have joined Craigstlist in helping people swap things. Skill-based exchanges are less common, but there has been a proliferation of services that make them possible. Prominent ones include TradeYa, Skill Harbour, Swap A Skill, and Time Republik.

Simbi is an evolution in the paradigms of the bustling gig economy which is expected to account for 40 percent of the US workforce by 2020. While Fiverr, Task Rabbit, Snagajob and their peers already allow people to earn through short-term engagements using their diverse skillsets, these are still marketplaces where money is involved. And money isn’t a bad thing; it’s an unnecessary intermediate step if there’s an efficient way for people to appraise and exchange services directly. That’s exactly what Simbi attempts to do. It also makes it possible to draw value from skills for which there may not be much demand in conventional employment channels. There aren’t too many other places online you’re going to be able to barter a glowsticking lesson.