According to a Time Magazine poll, 22% of American adults have offered some kind of good or service through the peer-to-peer/on-demand/gig economy. Uber, Lyft, Rover, and TaskRabbit are some of the fastest growing startups on Earth, helping to put millions of people back to work on their own terms. If you’re willing to do menial gigs at random hours for decent pay, you can enjoy the elusive status of “being your own boss.”

I applied to TaskRabbit in May. It took about a month for them to run my background check and another month to schedule an orientation, but I did it, and now I’m up and hopping. Along the way, I’ve learned a few things about people, work, and certainly myself. Since I’ve been “On the Rabbit,” as nobody calls it but me, here are the five realizations that have resonated with me the most…

Bonus Lesson: No one looks this good when they’re moving boxes.

Lazy People Will Pay You to Do Next to Nothing

The people who order from TaskRabbit tend to fall into two categories: they’re looking to accomplish something they have neither the skill nor the strength to complete on their own (e.g., repairing a sink or mounting a television), or they’re very, very lazy. I had one couple pay me to wait in line for an hour at Cinespia, a cemetery that doubles as an outdoor movie venue.

They arrived late, rendering my entire hour of waiting useless. So I talked my way inside, ran to claim a great spot on the grass, laid down partitions, and defended the territory against encroaching blankets. When the couple finally arrived they picked an objectively inferior spot and assured me I had done “an incredible job.”

Some people enjoy buying services whether they need them or not. For a tasker who’s desperate to please, hours that contribute nothing are bittersweet. On the one hand, you’re irrelevant to the outcome of that situation. On the other hand: money. 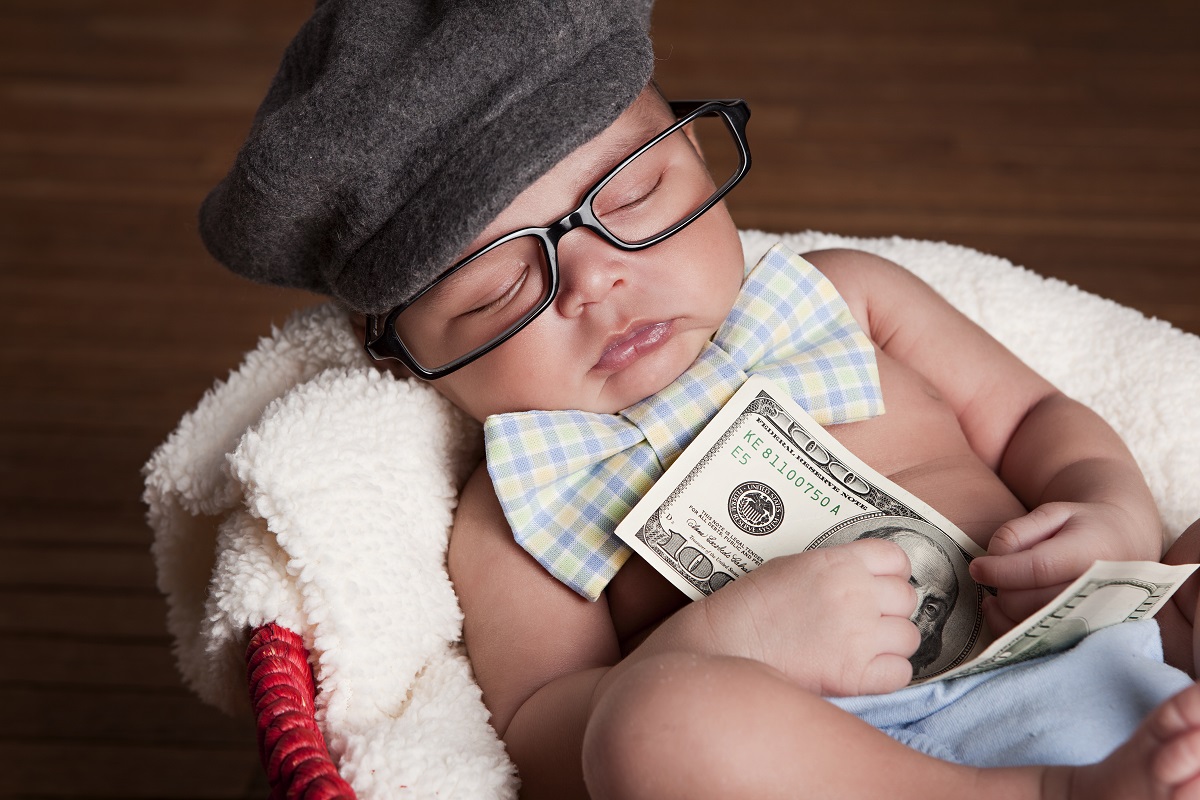 One of my earliest tasks involved two racist bros, a case of light beer, and an IKEA dresser called “Tvilum.” I spent 2 hours with Tvilum while my clients regaled me with the benefits of gentrification in cities like my hometown of Baltimore; and the benefits of “fat chicks” when you “need to fuck.” They also laughed at me for “needing the work so much,” because I was smiling when I met them. They were TERRRRIBLE.

You’ll be glad to know I misassembled Tvilum—not by choice, but perhaps by destiny. I put one piece of wood on backwards, and now it’s a daily reminder that Karma is a petty criminal. To my surprise, my morally reprehensible client was impressed I had even tried. I left with a few bucks, but I also got to peak behind the curtains to see how shameless people can be in the privacy of their own homes…or you know, in front of a total stranger. For a writer, it turns out that this is a huge selling point. You could probably catalog the entire range of human nature by interviewing nannies, housekeepers, and now, TaskRabbits. The Help have eyes, people. And some of them, access to WordPress.

Here’s a task offer I got a few nights ago at 11:30 pm on a Friday. Another great example of how drunk people (or foreign hitmen?) keep this economy humming: 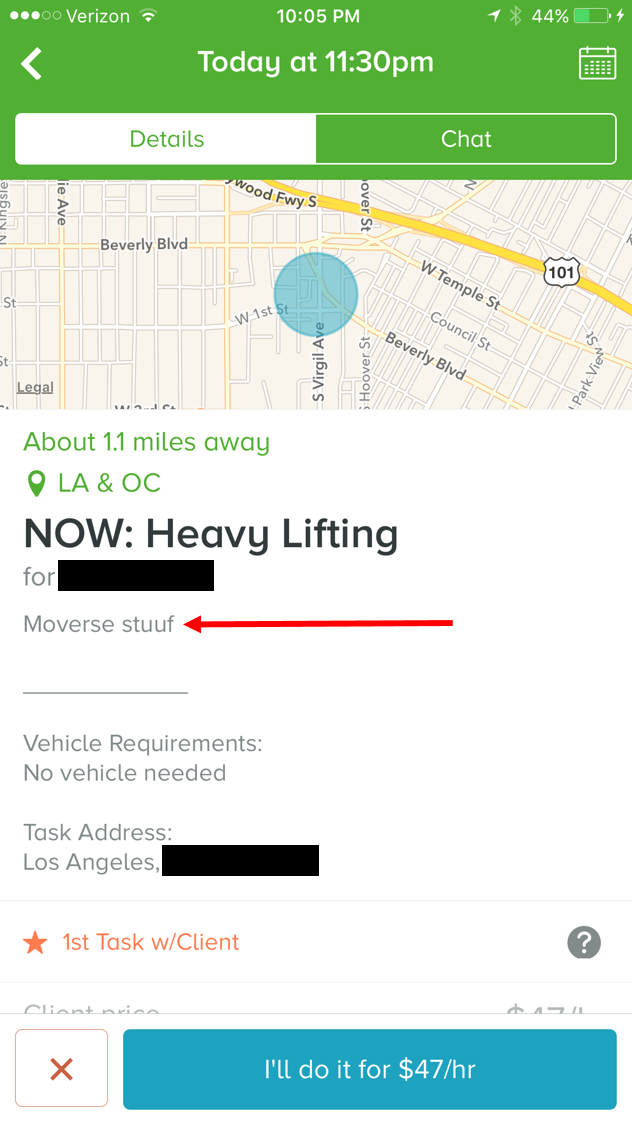 I’m not required to respond right away to any tasks I receive after 8 pm, but if I don’t respond, someone else will. In order to be a top tasker, I have to stay connected.

I recently did some quick negotiating at 1 am for an 8 am move. It wasn’t ideal, but it earned $60 plus tip for an hour and a half of work before I’d normally even be awake. Sure I had to eat sardines out of a can while driving there—which immediately spilled on my crotch, chest, and face—but that’s Gig Economics 101, baby!

Menial Work Can Provide A Surprising Amount of Inspiration & Opportunity

My first assignment for Task Rabbit involved unpacking boxes with another Tasker, whom, for the purposes of this story, we’ll just call Brian—not to protect his identity, but because I’m total shit with names. When Brian and I were done working, we talked about our previous jobs. We’d both come from 50-hour-a-week office positions that drove us crazy. His job promoted him for being complacent and working long hours, and my job discouraged me from pursuing more ambitious goals and asking for flexibility.

At one point Brian turned to me and said,

“You know, we just helped that guy out. It took an hour and we got paid…That feels pretty good.”

He was right. It did feel pretty good. I had sort of forgotten that feeling of accomplishment that arises when you provide a service that is only provided because someone explicitly asked for it at precisely the time they needed it, rather than the thrill of pushing out product into a sea of ambiguous demand and fist-pumping when it sticks. And along with that context, comes the wonderful world of impromptu upside.

TaskRabbit had been originally categorized by us as a tentative solution to the upside-down incentive structures from which we had come, but the opportunities, both personal and financial, have started to feel a lot more rewarding than a slavish stop-gap. Like other gig economy jobs, you’re the CEO of your own tiny company. You can try to sell anyone anything. I went into one task with the job of organizing, and came out with a potential promotional video job; top taskers can make up to $7,000 a month by selling and upselling specialized skills that way.

I Need To Revise My Definition of “Work”

Before TaskRabbit, I was spending 14 hours a day commuting and working in an office. I convinced myself I was very disciplined. As it turns out though, being on autopilot and checking Facebook, even if it lasts for 14 hours, isn’t technically “work.” Work is saying, “Yes” to something you really don’t feel like doing. TaskRabbit forces you to say “Yes” to things you really don’t feel like doing—A LOT. 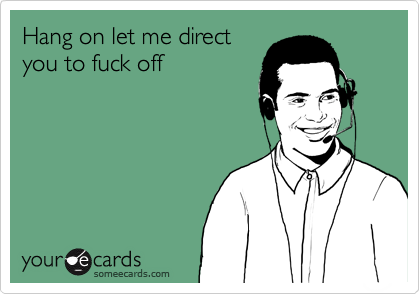 The tasks for which you plan ahead (less than 50%) aren’t so bad—you can mentally prepare for those. It’s the tasks you have to choose in the moment that require discipline and competitive spirit. You usually have about 30 seconds to decide whether you want to dig a hole, or drive for hours, or clean someone’s toilet. The only way to do it is to fully convince yourself that there’s no better time than now to make a small amount of money.

That’s real work, as I’ve come to understand it; learning to say yes in the moment, even when it doesn’t suit your most comfortable sensibilities, to serve the bigger picture. According to Marcus Aurelius’ Stoic philosophy—the Ancient Roman version of self-help—the best way to control your ego and live a fulfilled life is to accept obstacles of all kinds. No job is beneath you, because every encounter you endure teaches you something. And if it only lasts an hour and you get paid, you’re going to be more likely to more easily overcome similar obstacles going forward. The pay is just enough to make it worthwhile on a regular basis, and the autonomy, flexibility and slow growth help to seal the deal.

The person who led my orientation, who now has a full-time job, admitted to still picking up a task every week or so. With a single click, an empty Sunday can become a flatscreen-wall-mounting party with a vertically-challenged hernia patient. Whether it’s the money, the people, the preoccupation or the perspective; in some way, it’s all worth it. That’s the beauty of “Riding the Rabbit.”