Let me start off with a little cliché. Addiction to phones and apps are real. Most of my friends have it. My hand will constantly reach into my bag, dodging lipsticks, notebooks and pens to grab that thin, sleek block that seems to contain my whole world. A physical conjuring of my social life, if you will. According to a U.S. survey, most people check their phones a couple of times an hour. Most of us can’t leave the house without our phones, and if we do, we will make a U-turn half way to work and risk being late just to have our phones with us. Or is that just me?

There are few apps and products out there to reduce the usage of phones, though, like Luna Launcher and Pause. But I wanted to try out an app called Space that was created by Dopamine Labs Inc. What’s unique about this product is that it helps you completely break app addiction. 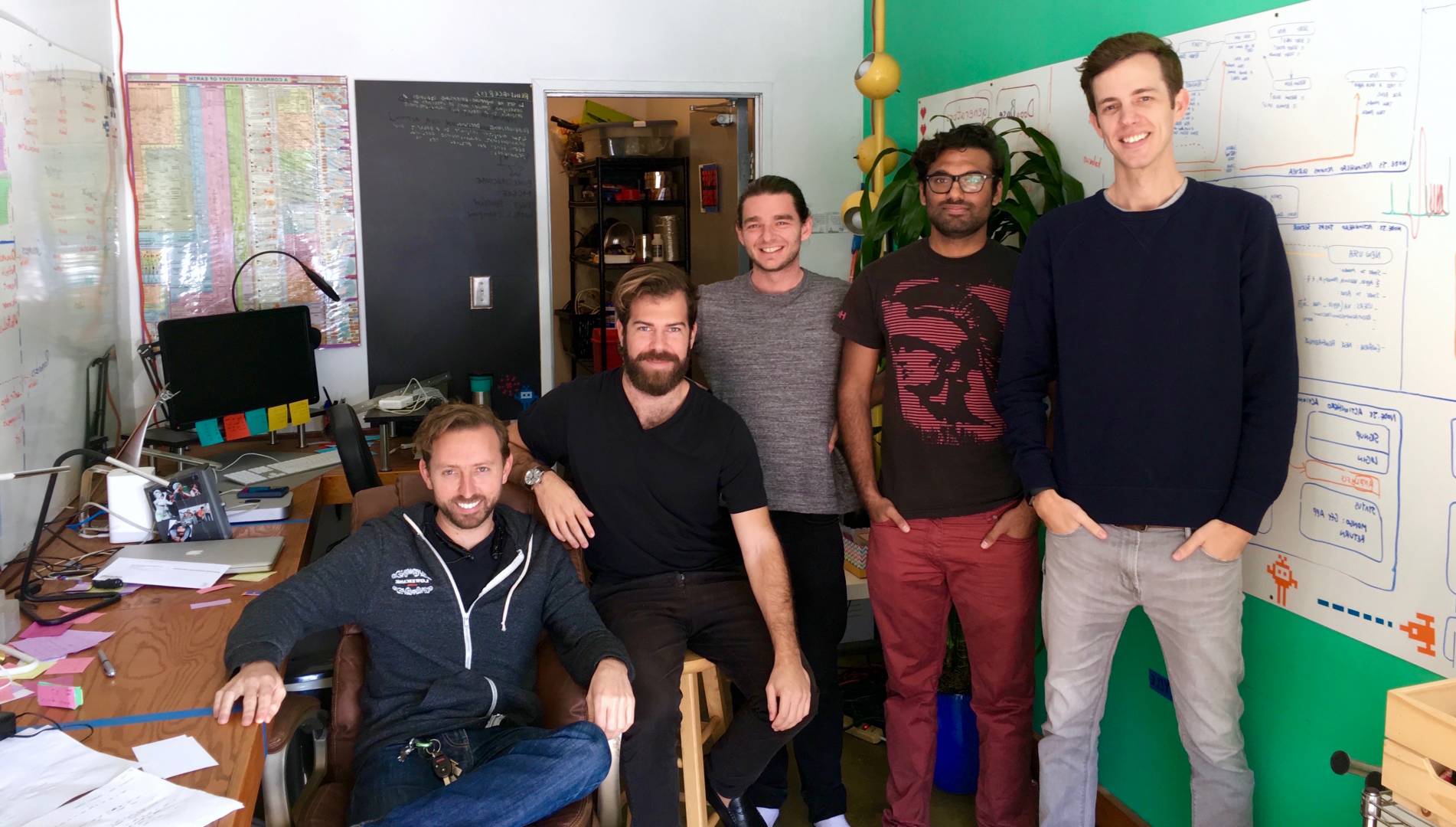 Space From Your Apps

I downloaded Space from this link onto my iPhone. Currently, this product only runs in iOS Safari, but, not to worry, a version for Androids is expected to be out this week. You can get that version here.

Space puts a “moment of Zen” between you and the app you need space from. So, if you are a Snapchat maniac like me (to the point where people know its sole reason why you’re reaching for your phone in the first place), then this might be a good app for you to try.

“You know that itch in the back of your brain that says you always need to be checking your phone? The delay from Space makes the itch go away,” said Dalton Combs, CEO of Dopamine Labs Inc. There is a selection of apps – from social media giants like Twitter, Instagram, Facebook and Tinder, to games like Pokémon GO, Words with Friends and Clash of Clans.

I decided to get Space from my Pinterest app because lately, I find myself scrolling for miles on women’s fashion and popular boards. After selecting the Pinterest app, Space created a new badge for it on the home screen – it had the same familiar Pinterest logo, but with a customized Space background. As the tutorial suggested, I replaced the original Pinterest app with the Space Pinterest app. I moved the original one to a different page where I won’t see it. Once I opened the Space Pinterest app, I expected my newsfeed to pop up. Instead, I was welcomed by a soothing blue-green page with an instruction telling me to breathe. A circle grew and shrunk to help me control my breathing visually.

“That breathing does two things,” said Combs. “One, it gives you an opportunity to reflect and ask ‘is Facebook really what I want to be doing right now? And, two, by putting a small delay between the ‘action’ tapping on the FB icon and the ‘reward’ seeing cat videos in your feed, it un-wires the neurological habit loop that FB is trying to create to keep you hooked.”

The more I went back to the same app, and the more breathing exercise came up, I realized how much I actually go on this app for no reason. There were times when I closed the app right after the breathing exercises because I just lost interest. At times when I was sitting at my desk at work, in my downtime, I would pull out my phone and my finger would hover over Pinterest. But I found myself quickly locking my phone and putting it away.

I used Pinterest less ever since I downloaded Space, so I can confidently say this app worked out for me. But let me be clear: I still use Pinterest, but, now, only for a reasonable amount of time.

The Science and  Tech Behind It

“The brain makes new habits, including the ones with our apps and phones when things go unexpectedly well. When we do something and the consequence is better than we anticipated,” said Combs. “This is what’s inside slot machines, [they power] our Dopamine API, and why we’ve all dated at least one unpredictable person longer than we should have. But in order for the habit to stick, the delay between the action we did – and the consequence of the action – has to be fast. Really fast. So Space is designed to slow that consequence down.”

The AI built to power Space calculates the optimal delay for each user, each app they’re ‘recovering’ from, and how it should change over time. “This is really important because as people’s behavior starts changing (because of using Space), Space itself learns to adapt to their new behaviors,” said Combs.

Space was launched on January 14 and was originally built as an iOS app, but there’s a reason why you can’t find it in the App Store.

“Apple rejected it from the App Store on the ground that any app that encourages people to use their phone less is inappropriate for the App Store. Kind of a screwed-up response from Apple, given their stake in app addiction!”

Space adds new apps to their list each week. “As people make new apps that become addictive, we’re going to need to keep up!” said Combs. 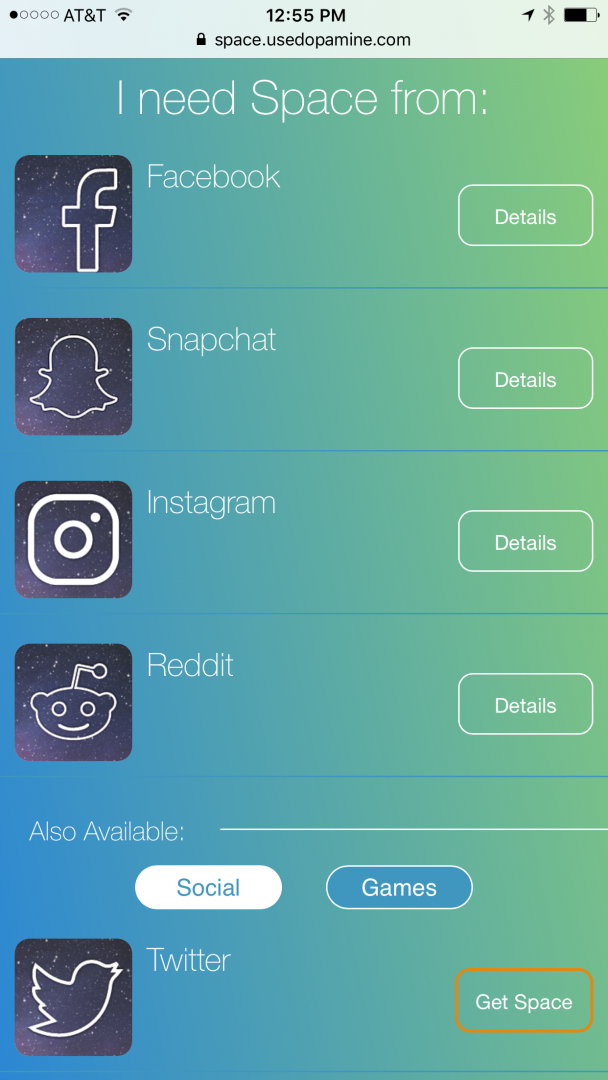 “We think that the most important thing about technology is what it does to our behavior,” he said. Programmers have been creating apps that are easy to use as well as that look beautiful.

“Everyone became concerned with getting UI/UX right, and this was largely driven by the massive wave of smartphone adoption since the advent of the iPhone,” said Combs.

But we’re in the middle of another shift now. Computing is going from mobile to ubiquitous. Advances in IoT and wearable computing means we’re surrounded by computation now. A lot of human behavior that has previously been offline is now coming online; multitudes of new sensors are now able to pick up tons of data about how we behave in real life and not just online, explained Combs.

“That opens up an exciting new frontier for how we think about understanding, and changing, human behavior,” said Combs. “‘Behavior Design’, the application of behavioral science and ubiquitous tech, is going to replace our pre-occupation with Experience Design and Interface Design. So we’re designing the technologies that will be the foundation of Behavior Design.”