Starry is a new service that offers two things: an Internet connection, and a Wi-Fi router. A lot of you are using both of those things right now to read this article. So how does a service convince people to buy something they likely already have? By filling a gap of course, and there’s definitely an internet gap that needs to be filled.

Starry is hoping to improve the quality of Internet service available across the USA. According to Akamai’s State of the Internet report that came out late last year, the USA figures very close to the bottom of its list of top 25 countries by average peak connection speeds. Furthermore, there are many sections of the country in which people don’t have the option of switching between ISPs due to the existence of monopolies.

But it isn’t just existing broadband users that Starry wants to reach; they’re also hoping to bring high-speed internet to areas where it hasn’t been available before. The FCC reported in its annual Broadband Progress Report that 34 million Americans don’t have access to broadband, which it classifies as connections with 25 Mbps download speed and 3 Mbps upload speed. Also, 41 percent of schools aren’t able to provide the stipulated 100 Mbps speed per 1,000 staff / students.

Starry claims to have a solution to a lot of these problems. 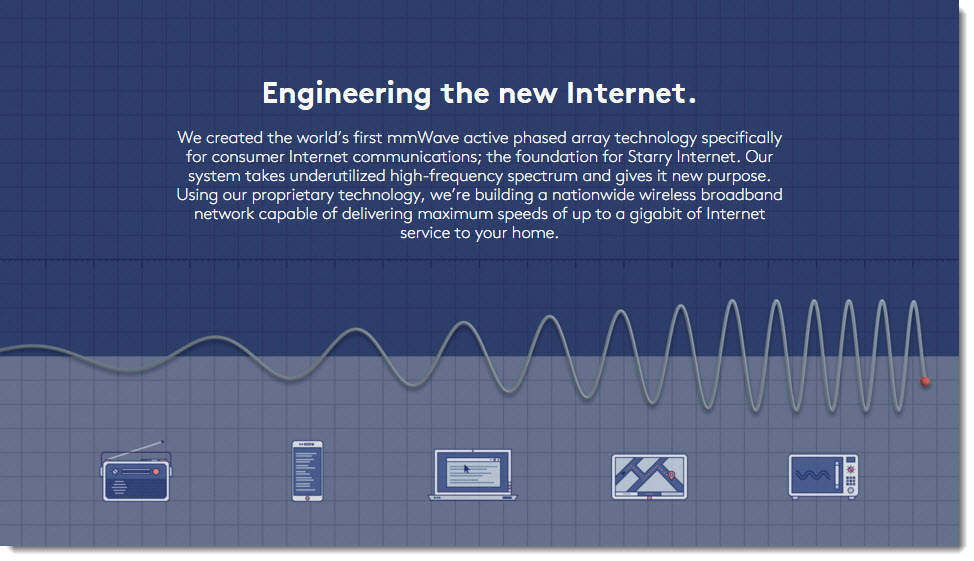 The company will address the monopoly issue by, you know, existing, in different places. The first of those places is Boston, where it will kick off its beta test for Starry Internet this summer – its own Nationwide broadband network. What will make Starry’s expansion efforts simpler than most is that its technology is entirely wireless. Users are given an antenna that will tap into Starry’s signal towers which will be installed across cities. As a result, the startup can skip the whole rigmarole of having to dig up trenches, lay out cables, maintaining fibre optics etc., which other services like Google Fiber have had to deal with.

As far as providing speeds that meet the FCC’s requirements for broadband goes, Starry will have no problems; the service promises users gigabit speeds. To put that in perspective, the average speed in the USA is 11.9Mbps. Even at just 1gbps (the minimum gigabit speed), you’d be able to back up large amounts of data instantly and download whole movies in seconds.

Starry hasn’t announced its rates yet, but there’s reason to believe it will be cheaper than most ISPs out there. Since the service is wireless, there will be no installation costs or waiting around for the cable guy to show up. There will also be no data caps for Starry subscribers, so you won’t have to pay for overages or worry about curbing your Netflix binges like a lot of Comcast users may be forced to.

That will have to wait a bit though…

What’s going on sale tomorrow, is the Starry Station; the startup’s advanced WiFi router. The Station monitors all devices making use of your Internet connection and displays the speeds at which each of them is operating on its 3.8-inch ambient touchscreen. If any of the devices are having a problem connecting to the network, the router guides you through a diagnostic process. It can be configured to work with a connection from any ISP, so owning the Station doesn’t mean being locked into the Starry ecosystem (though they wouldn’t mind if you were). The Starry Station offers some neat features, but at $349, it’s among the pricier routers available. 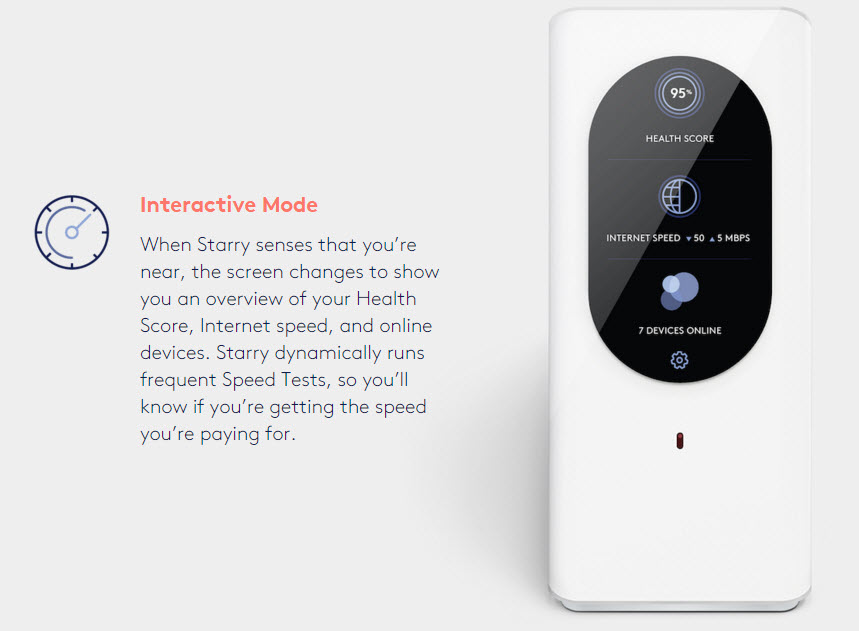 In addition to the interactive, informative router, Starry also provides a smartphone app that enables the easy management of ScreenTime parental controls, remote health checks and other handy features when you’re on the move. 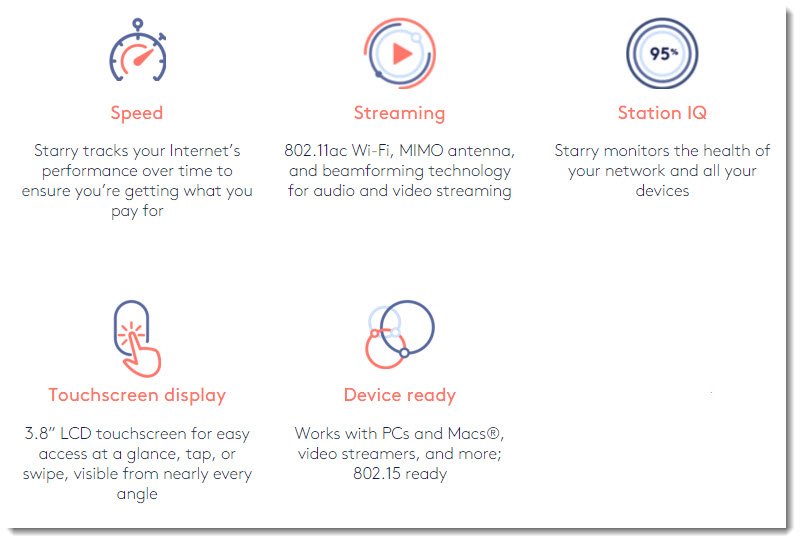 Starry’s new broadband service is something for which there is sure to be demand, but there will be a few hurdles to overcome. Given the disruptive nature of the service, there’s sure to be aggressive lobbying from the big-brand ISPs. The wireless technology may also prove to be a challenge, since connectivity can be disrupted by weather conditions. To ensure that the wireless signal is available to all its users the startup will to have to install its stations at regular intervals across cities, which could mean running into approval issues down the line.

The team behind Starry has some experience with wireless technology and a lot with regulatory challenges, though. The startup is founded by India-born Chet Kanojia, whose last project was Aereo, where he created miniature antennas to capture signals broadcasted by TV channels. Aereo was forced to shut down after the Supreme Court ruled the service infringed on copyright laws. Let’s hope, for American Internet users’ sake, that Kanojia’s latest endeavor is able to stave off the lawsuits this time, because there very well might be a few.