TechCrunch Disrupt NY 2016 is in the books, folks. The location for the event shifted from Manhattan to Brooklyn, but the action was engaging as always. Here are all the highlights from the event.

Before startups with fully developed products take the stage at Disrupt, designers and engineers from around the world are thrown together for tech’s equivalent of the Le Mans. Many Hackathon alumni have gone on to make a name for themselves; GroupMe, for example, was acquired by Skype for $80M. Despite the mere 24 hours allotted to for product creation, the event has become one to watch.

Looking up recipes online is easy as pie, but baking one while scrolling through web pages can get messy. Hungry Host makes finding and following recipes while cooking less of a challenge, using Amazon Echo’s considerably advanced natural language processing algorithms. You start by using your Echo device to tell the app (yes, actually tell it) what ingredients you have lying around. Based on the ingredients, you are given recipe suggestions. Once you’ve picked a recipe you’d like to tackle, you can navigate the steps using your voice and have them dictated to you by Alexa, leaving your hands free to chop, dice, mince, marinade, or whatever else needs to be done. 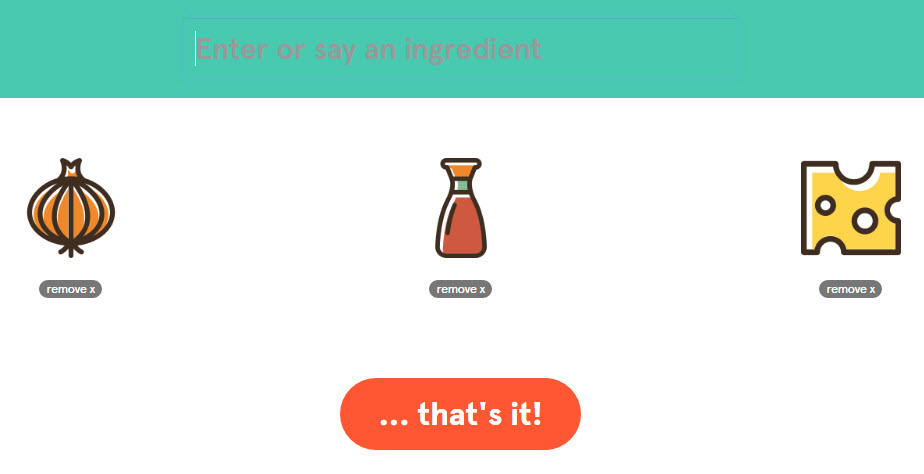 Bumperz turns smartphones into collision prevention systems for cars. The software uses data obtained from the New York City Open Data API to notify drivers when they’re entering accident-prone areas. It also alerts fatigued drivers while they’re changing lanes. The team plans to add a proximity sensor that will be triggered when an obstacle or another vehicle is too close to a car.

MenuMe is a translation app – not for translations from one language to another, but from any language to images. The app is aimed specifically at travelers who may not always know what they’re signing up for when they order something to eat in a foreign country. To use the it, you simply scan an item on a restaurant menu with a phone camera. MenuMe reads the entry and returns an image of the dish, which it then overlays on  the menu in augmented reality. 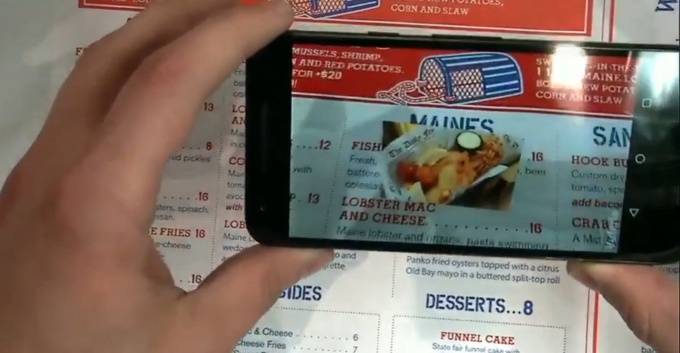 WordPress, SquareSpace, and some of their peers have already made designing basic websites pretty simple. AlexaSite simplifies things even further by allowing live design updates using natural language commands. For example, you can say “Alexa, left align the text on this page,” instead of having to edit CSS code.

AlexaSite uses the Alexa API by Amazon and is compatible with SquareSpace websites. This one’s sure to have web designers excited. 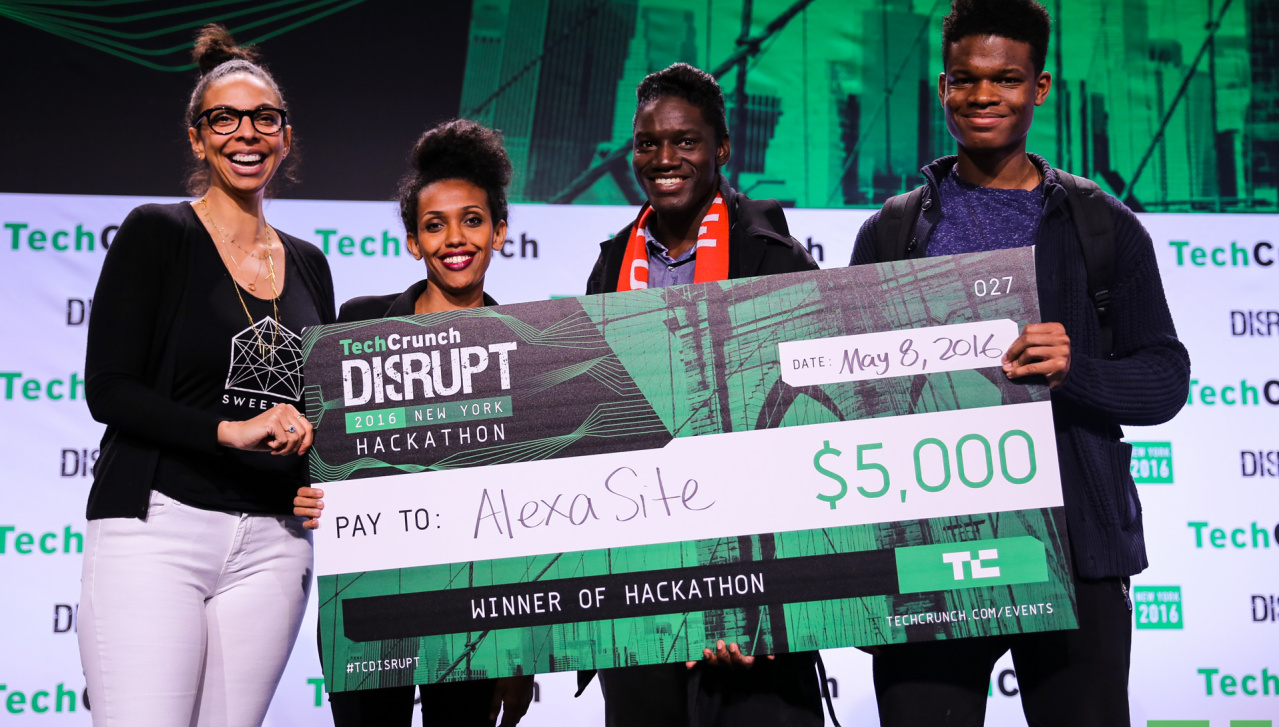 Battlefield threw up quite a varied field of startups this year. Niches represented ranged from livestreaming and underwater drones to water purifiers and vitamin pills. These are the six startups that made it to the final round.

Bark gives parents a way to ensure that their kids are safe online without having to snoop their every move on the Web. The service is quite comprehensive: parents can link Bark to their kids’ social profiles on Instagram, Facebook, Vine, Twitter, Tumblr, YouTube, Flickr, Google Plus, and GroupMe; email accounts on Yahoo, Hotmail, and Gmail; it even supports the native SMS and MMS apps on iOS and Android.

Once Bark has access to these accounts, it uses machine learning to check for signs of unsafe interactions like sexting, cyber-bullying, predatory behavior, and so on. It also alerts parents if children show signs of depression and other mental health issues. It doesn’t stop there: the software even suggests suitable actions to take for each red flag that is detected.

Reverse osmosis is a more dependable water purification method than carbon filters; it’s also significantly pricier. WaterO makes potable water more widely accessible through a tabletop gadget that produces double the volume of pure water than standard Reverse Osmosis purifiers. It comes with an app that reminds users when to drink water and monitors the filtration process so it’s easy to figure out when the device’s filter needs to be replaced.

Traditional multivitamins are packed full of nutrients, but that isn’t always a good thing. Some nutrients figure in multivitamin pills because they’re formulated based on outdated data; these can have adverse effects once they accumulate in the body. The team behind Ritual recognized this and set out to make better vitamin pills.

For $30 a month, the service sends its users vitamins to enhance their energy, skin, and mood. The ingredients are sourced from all over the globe, and are based on the latest research by a team of scientists. Pills are encapsulated using a proprietary technology that ensures optimal absorption into cells.

Wait a minute – aren’t drones technically robots that can fly? SeaDrone is challenging notions and naming conventions with a drone-like robot that takes to the seas instead of the skies. Given its unique sphere of activity, the device has thrusters and propellers instead of wings. It also has an image stabilization system to help capture video underwater while in motion.

The startup is currently pitching its device to those involved in the aquaculture industry who often have to hire divers to inspect underwater equipment. SeaDrone is meant to make diving unnecessary by snooping around underwater independently and relaying video back to a tablet app. That’s one more job taken away from humans by a machine, but a simpler day on the job for fish farmers everywhere.

BitPagos is an Argentinian startup that has created a way for people to buy things online on credit, using bitcoin instead of credit cards. This is especially useful in emerging markets where credit card adoption rates are low, and bitcoin may actually be more stable than the value of local currencies.

The startup puts customers through a verification process, and then checks their credit valuation within a day at most. Approved customers are allowed to buy things on credit and either pay for them all at once at a later stage or in installments. BitPagos makes its revenue off an interest on the payments. Customers still benefit since the premiums are lower than those levied by credit cards issued by banks.

Beam is an application that makes livestreaming games on services like Twitch more fun for viewers and streamers. Viewers have a more immersive experience by getting to contribute to gameplay (like by choosing a weapon, for example) and earning points and upgrades, all while watching a practically zero-delay low-bandwidth HTML5 stream. Streamers get to build and monetize on a loyal community by having users participate directly in activity on their streams and a secure chat feature.

Beam provides an SDK to allow developers to build interactive features for games, so the experience on the platform should get more versatile and fun as more developers decide to join in.

The first ever demo of AI virtual assistant Viv was made at Disrupt 2016 by Dag Kittlaus, most well-known for being the man who created Siri.

Kittlaus started the demo off by asking the AI for a simple weather update. What followed was a series of progressively complex queries that showcased how much more advanced Viv is than contemporary virtual assistants like Siri. The AI transferred money to Kittlaus’ friend in one step and was smart enough to book an UberXL when asked for a ride to Madison Square Garden for six people.

The things Viv pulls off with its natural language processing capabilities are amazing. What’s even more amazing is how it does them. A patent-pending technology called Dynamic Program Generation gathers the intent of each query Viv receives, and writes a software program in real-time to respond to that query. That’s software writing itself, basically. Never has the classic ‘mind blown’ gif been more appropriate.

New York investing scene godfather Fred Wilson put to rest fears that we’re in the middle of a bubble akin to the one that caused markets to crash in the late ‘90s. The Union Square Ventures co-founder assured everyone that there’s enough capital to foster growth in the startup world. However, he did concede investors may be a little hesitant to throw money at young startups. Wilson chalked that up to ventures taking longer to exit and make VCs their money back. But overall, he felt there was no crisis afoot that the industry needed to fear.

Facebook Messenger Is Watching for Bots That Piss You Off

Chatbots are a thing now, and consequently, so is bot spam. Facebook wants keep interactions with bots on Messenger a pleasant experience, so it is considering a variety of methods to detect unwanted communications. Messenger product head  Stan Chudnovsky revealed that work was underway on a robust analytics system that would help Facebook get onto spammy bots quickly and potentially block them – or at least filter certain messages.

Ex Citigroup Chief Financial Officer Sallie Krawcheck believes the investing domain has so far been “by men, for men.” So she created Ellevest to help women realize their financial goals; the startup launched officially on stage at Disrupt NY 2016.

Krawcheck spent hundreds of hours interacting with women to help understand their monetary goals. She came to the conclusion that the fairer sex tends to focus on buying homes, retirement, and starting businesses while making investments. Apart from those considerations, the investment platform also factors in nuances like the fact that women tend to live longer and take time off  work to raise children. Krawcheck believes the women-specific approach will help her users meet their financial goals in 70 percent of possible market turnouts.

Jessica Alba’s venture The Honest Company took retail operations into its own hands by opening an exclusive store in Los Angeles. Alba explained the reasoning behind the move, saying the startup wanted to be able to tailor the shopping experience to customers in a way that they couldn’t through third-party retail partnerships. The Honest Company plans to open in one more LA location, and will then look to open stores in its other big market, New York.

It was an organizational masterstroke to have Randall Rothenberg of the Interactive Advertising Bureau follow Till Faida of Adblock Plus on stage at Disrupt NY 2016. TechCrunch’s Jordan Crook proposed they shake hands; Faida waited on stage, but Rothenberg chose to remain where he was backstage. AWWWWWKWARRRRD.

In his talk, Faida defended ad blockers by saying that content creators were to blame for choosing a business model that depended on intrusive ads that provide consumers no value. He went on to plug an Ad Block programme called Acceptable Ads, which will enable publishers to display relevant ads that are unintrusive. Rothenberg  responded during his talk by saying “extortion is not a viable business model.”