There are significantly more citizens than there are police. The limited size of many departments means there’s only so many resources to respond to emergencies. Although there have been other tamer tech attempts to simplify civil participation and support, they don’t do much to help with real-time emergencies. They have also taken less disruptive approaches, encouraging everyone to be a “concerned citizens” rather than a crime-stopping vigilante.

In New York City, there are 34,500 police officers who serve over 8 million people. Despite the high population, the closed nature of the 911 system means only 0.5% of the population knows about crimes when they’re reported. “Can injustice survive transparency?” That’s the question posed by Vigilante, an app designed to alert users when crimes occur near them.

In theory, this means users can gather information in real-time to help the police, and possibly step in to help save victims. In practice, however, it’s an application that potentially encourages mob justice, and in some cases, can even lead to more innocent, unequipped people being killed.

The team behind Vigilante monitors police scanners and other sources for real-time crime information—there is no direct integration with the official 911 system. From there, when an incident occurs, an alert is sent to Vigilante users with locations and details. They can choose to go to the scene and “help,” perhaps by broadcast video, posting updates that are shared across the user base, or maybe throwing a few karate chops.

In the beginning of their promo video, users are advised to keep a safe distance from any incidents that occur. However near the end, you can see a Vigilante user confront an attacker with nothing but their cell phone. Maybe it’s an exploding cell phone? 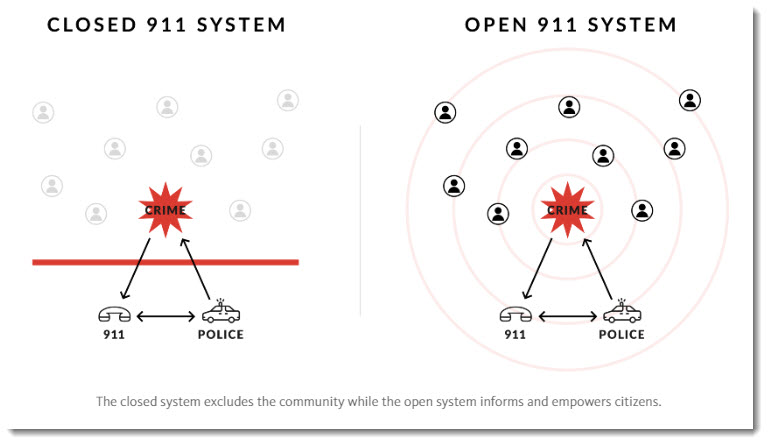 Vigilante recently completed a 1,000-user closed beta and launched publicly for New York City last week. The app no longer seems available on iTunes, but Andrew Frame, founder of Vigilante has said that he plans to release it in additional cities in 2017.

“The lens of the camera is incapable of lying. When we are able to look at a situation from multiple angles, the truth emerges. Transparency is the single most powerful tool in the fight against crime and injustice, and we believe it will rebuild cooperation towards a shared vision. Cooperation, in turn, will lead to safer communities, better cities, and a stronger nation.”

Law enforcement professionals don’t necessarily agree with that stance. In an interview with the New York Post James Pasco, executive director of the National Fraternal Order of Police expressed concern over the app saying, “This poses a huge problem not only for police officers but also for citizens because there’s a tremendous potential for well-meaning citizens who are attempting to intervene in a crime to be mistaken for perpetrators by police officers.” He continued, “However well-meaning [this app] may be, it’s not a good idea from a public safety perspective. There are going to be rare instances where it is appropriate for a citizen to intervene, but there is no substitute for organized, well-trained law enforcement to do the job.”

Weird…that’s not what movies taught us…