As the expression goes, virtual reality, or VR, has been around the block a couple of times in the last twenty years or so, making a comeback early this decade thanks largely to the gaming industry.

While VR has been defined by gaming in the past, that may change in the future. According to Prateek Jose writing in SnapMunk late last year, “Despite being perceived mostly as an accessory to gaming consoles, virtual reality is an extremely versatile piece of technology. Some early adopters in different industries have shown that it can be used for more than just a novel gaming experience. These implementations may just be what it takes to carry VR into the next stage of its development.”

Early adopters in the food and beverage space are indicative of the kinds of consumer driven VR applications one may see in the future.

A little known factoid about consumer giant Nestlé is that they have been an early adopter in the digital space since the very beginning of the concept of “digital space.” From what they called their “3-Net Strategy” in the mid-90’s (Inter-, Intra- and Extranet) to launching the first online retail store in Europe, an endeavor they called “Le Shop.”

The digital genes still run strong in Nestlé, and as a result last year the Nestlé Nescafé brand became the world’s first coffee brand to provide consumers with a fully immersive virtual reality experience, transporting them to the coffee fields of Brazil with the help of Google’s virtual reality viewer, Google Cardboard. The goal was to promote transparency and sustainability to millennial consumers by allowing them to experience the origins of their beverage as opposed to just reading about it. 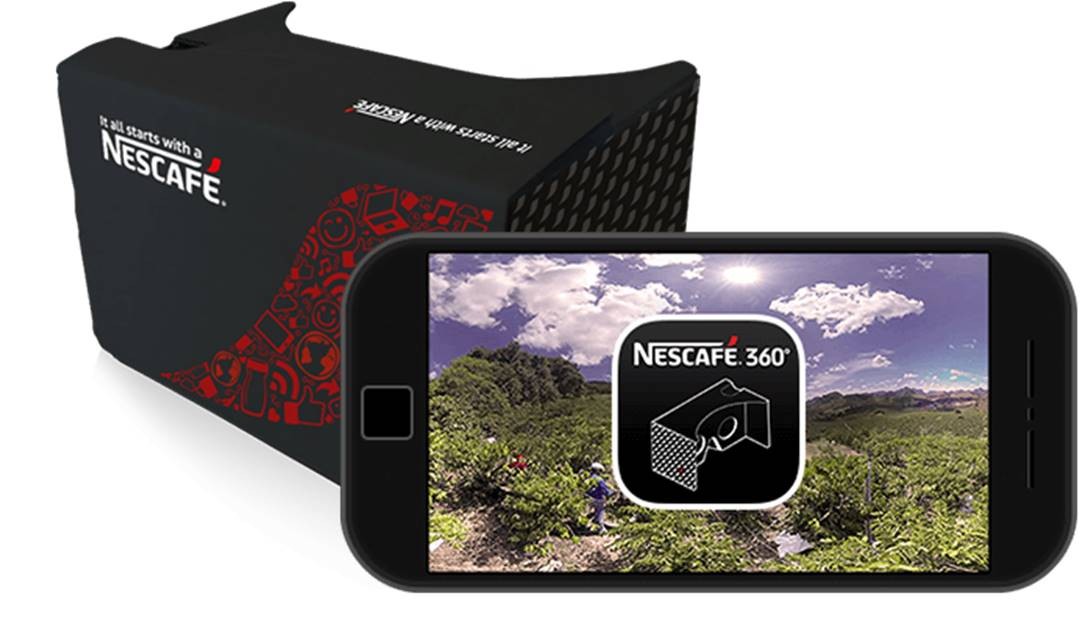 The initiative also showcases Nescafé’s plan to help its supplying farmers achieve better quality coffee, higher yields and an increased income. The campaign will involve the distribution of around 10,000 branded headsets across 13 markets, either through in-store events or as competition prizes.

A brand spokesperson said: “The Nescafé 360˚ launch is another significant digital milestone for Nescafé, which recently became the first global brand to move all its international and local websites to Tumblr, as it builds upon its strong social media position and develops closer relationships with younger consumers.”

In another industry first, U.K. Craft brewer Meantime has used 360° filming technology to create a video tour of its brewery in Greenwich (South-East London) led by a tour guide who is also a beer sommelier. The tour will be used at Meantime beer, with people in the industry, and at food tastings. In what will no doubt be a popular move, the Meantime beer tour will also be going on tour to U.K. festivals such as Wilderness and On Blackheath.

Using Oculus Rift software and the Samsung Gear VR headset, the experience is run on a fully functioning GearVR app, featuring binaural 3D audio alongside the 360 visuals; the experience is claimed to be a truly immersive tour. Meantime Brewing Company marketing director Rich Myers said, “As we continue to expand we remain passionately committed to pushing the boundaries and innovating our craft beer offering – whether that’s the physical creation of high quality beers or experimenting and evolving our digital offering across the board.”

He continues, “It’s this sense of invention and desire to reach craft beer drinkers outside of our traditional London heartland that has led us to create the Meantime virtual reality brewery tour experience – something we believe is a game-changer in bringing the brewery to them.”

It was the search for a motion sickness free VR experience that led me to the bowels of CES 2016 known as “Eureka Park” – that floor below the main floor in the Sands Convention Center, where between the white-sheeted partitions the technology of the future waits to be found and invested in.

I had read that Intel was working on its own VR goggles, and that unlike other companies, was making plans to eliminate motion sickness once and for all. As the article stated, “For those out of the loop, motion sickness is one of the biggest problems facing VR on its road to success.” The very last thing you want out of a VR experience in the context of food and beverage is an unsettled stomach.

The company working with Intel on the motion-sickness free device is IonVR, and at first glance, the VR headset looks like every other VR headset in the market. The design is a 3D printed box priced at $229 (available for pre-order on the IonVR website) and requires a VR-enabled smartphone that is 4.5 to 6 inches in length. 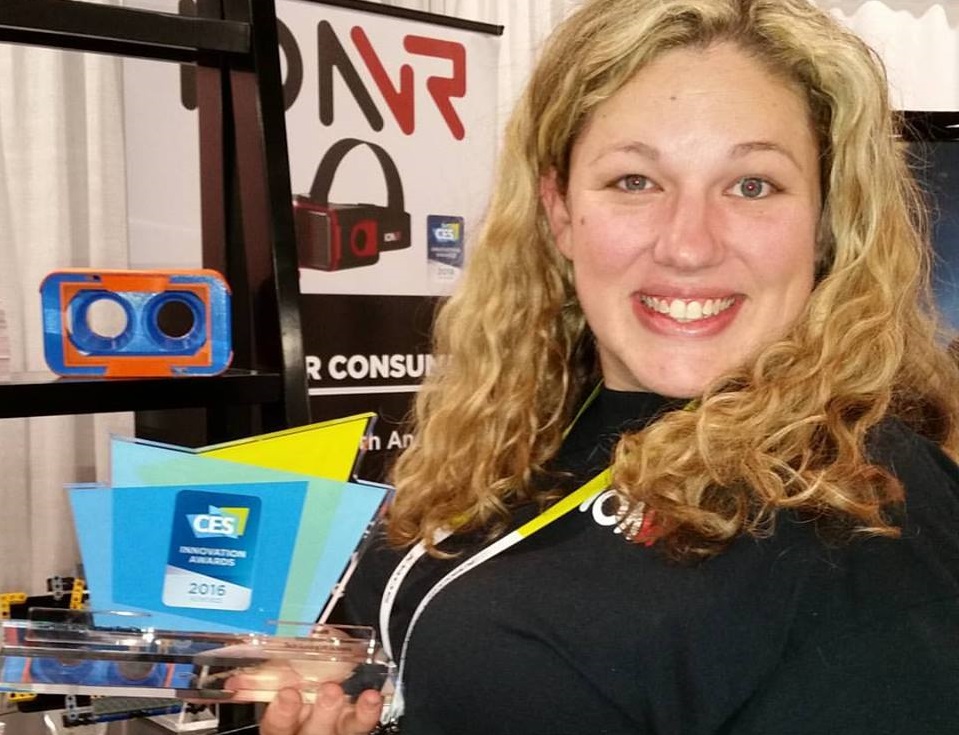 When I read of the initiative, I was prepared to be had at “Motion-sickness free”, but it was the “uses a VR-enabled phone” and the close to $200 price that had me really excited; I believe that these attributes will be must-haves for mass market adoption and industry-specific innovation. I had a chance to ask Brooke Linville, CEO of IonVR, about her thoughts on the future of VR and its role in the food and beverage industry specifically. Here’s what she had to say,

“A lot of people talk about games, entertainment, you know the mass part of most cases, but virtual reality is far beyond those experiences. What we are talking about is in the enterprise space and even in the consumer space. How this can apply to retail, how it’s going to apply to food manufacturers, beverage makers, all kinds of interesting applications…We had one guy talk to us about a jerky company who used a virtual reality experience to help sell most of his jerky…he went to a trade show and because virtual reality is such a cool exciting space, he landed a huge food contract because of the experience he offered at the trade show booth.”

Asked about other examples, Brooke said,

“We also know of other manufacturers who are looking at how they can demonstrate our industrial process to their customers, and so they are using 3D cameras to show insides of the machines that were used to make their products, so that consumers then can make informed choices about the companies that they chose to do business with. The marketing and promotion opportunities are incredible right now for companies to differentiate themselves and then as that grows you will see more and more consumer driven retail experiences.”

As with the experience itself, the technology has the opportunity to impact the food and beverage industry from a number of different angles. Here are the big ones to watch for…