We’ve come across Ogo, a wheelchair that’s unlike any available on the market, thanks to its self-balancing mechanism which allows for it to be controlled using subtle upper-body movements instead of the hands. Aipoly transforms smartphones into assistive technology using artificial intelligence; visually challenged individuals can easily identify objects around them by pointing their smartphone at them.

Among the more recent additions to the growing list of assistive technology devices is one that’s making it easier for the physically disabled navigate the interfaces of electronic devices and software programs.

Glassouse is a wearable mouse with Bluetooth support that’s designed to look like a pair of glasses (without lenses). Built onto the frame of the device is a 9-axis sensor which keeps track of users’ head movements. Attached to its body is a cylindrical apparatus encased in waterproof rubber meant to offer mouse-click functionality. The device is powered by a 3.7 volt Li-Po battery that lasts up to 15 hours on a single charge.

Despite all the components it holds, Glassouse weighs 1.6 ounces – extremely light for a mouse that needs to be worn on your head. A standard hand-controlled mouse usually runs over 10oz.

Glassouse’s Bluetooth mouse tracks head movements to judge where users want to position the cursor – no use of the arms or hands is required. When the head is centered in what can be considered a neutral orientation, the cursor is brought to the middle of the screen. From there, moving the head laterally directs the mouse either to the left or right.

To click or make a selection, users need to bite down on the small thing that resembles a telemarketer’s microphone positioned in front of their mouths. The improvised clicking mechanism has been tested under 3 tons of pressure over 50,000 times, so it should hold up for some time. 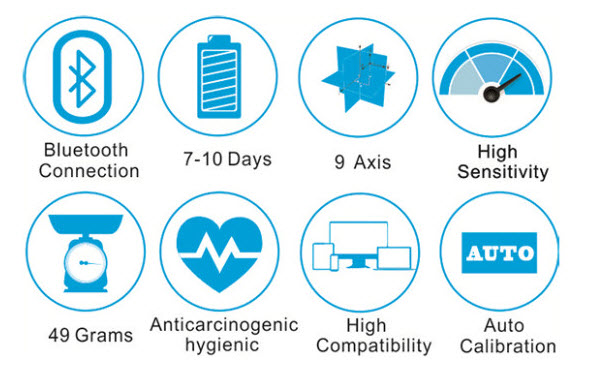 The mouse can be paired with anything Bluetooth-enabled, including Android phones, tablets, TVs, and Windows, Linux and Apple devices. Its makers suggest calibrating the device the first time it’s used or if any abnormal movements occur repeatedly. The procedure for calibrating the Glassouse and adjusting its sensitivity using the unit involves pressing the reset button on it, so users with no motion available in the upper body will require assistance to carry out that particular process.

Inventor Mehmet Nemo and his team have launched an IndieGogo campaign to make the device accessible to more people. The campaign has raised almost $5,000 so far, and has about a month left to reach its $10,000 goal. Units of the Glassouse are available through the campaign for $149 (exclusive of shipping) – half of the expected retail price of $299. Those who would like to contribute to the cause can do so through IndieGogo; every $70 raised allows the team to give away one unit of the assistive mouse to someone who really needs it.