As traffic continues to worsen across the globe, many municipalities are turning to high occupancy vehicle and high occupancy toll lanes to help reduce congestion on the roads. The concept is fairly simple; in both cases, cars are required to have two or three occupants to use the “express” lane.

Aside from physically spreading cars out and keeping them in the same lane, when it comes to the HOV lane, there even exists the potential for dynamic pricing to guarantee speeds of at least 45mph at least 90% of the time. That can result in 7-18 minutes saved on commute times in some regions. It’s convenient for drivers, and ultimately better for the environment. What you need to make sure of though, is that people don’t abuse the system, or it quickly becomes just another normal, congested lane.

Built into the model for HOV lanes is already a small mischief deterrent; they cost money to use. Realistically, you’re only supposed to use them if you have passengers in the car, but if you use it, your license plate is captured and you are billed.

HOV lanes are arguably hotter commodities, in theory, especially in cities notorious for brutal traffic—they’re free. Just how hot are they already? Well, one driver in Toronto, during last year’s Pan Am Games, was caught driving in the express lane with two fully clothed dummies in the car—he tried to make them look like a wife and kid with costumes. That hasn’t been the only case.

Enforcing those lanes has been difficult. There aren’t enough police offers to nab the majority of cheaters, and even if there were, it’s not as simple as pointing a gun to catch a speeder; spotting a significant number of passenger-based infractions in the far left lane of a highway can be tricky—not to mention straining on the human eye and neck.

Just as we’ve seen cameras adopted to prevent red light violations, Xerox (yes, the Xerox) is introducing a new technology designed to autonomously (with the help of the occasional image reviewer) spot HOV lane sneakers as they drive by. The system is named Vehicle Passenger Detection System and it works by using two cameras, an illuminator, a video image processor, and a laser trigger.

When a car passes by (going up to 100 mph) the cameras capture front and back images, including the license plate. By using geometric algorithms, the system is able to determine whether there’s actually enough people in the car to qualify for the HOV lane. The system can tell a dog apart from a human and can recognize a baby as an occupant, as long as they’re in a forward-facing seat. When it comes to differentiating dummies from real people, the company claims to have decent success, but the language in their FAQ regarding this functionality seems to lack some confidence;

Yes, the system has done well detecting this trick in pilot tests, however we haven’t performed a dedicated study to determine its accuracy. During our pilots, we noticed that using a dummy, or another inanimate object, to try and trick the system is a rare occurrence. We’re always making improvements to XVPDS based on what we’ve learned in real-life scenarios. One thing we know for sure: Compared to human counters, the computers usually have the advantage. The system would truly be maximized for success if we combine the strengths of humans and machine by  transferring  human roadside counters to a position of XVPDS image reviewers. 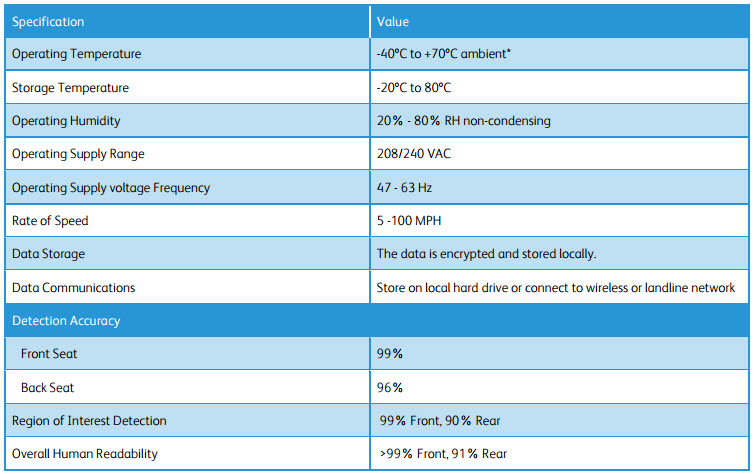 The company also mentions, “In our recent trial under rush hour conditions, human observers were challenged to score approximately 660 vehicles per hour, or 11 per minute. This means the human counters had to evaluate a vehicle every 5 seconds or so without a break for a three-hour stretch.”

While the system is fairly high-tech, it doesn’t require too much specialized equipment. The company says it can use commercially available camera equipment, can be used as a standalone product, and can be setup on the roadside or via overhead camera. Pricing for the camera system isn’t readily available. Xerox says the infrastructure costs similar to the price of an electronic tolling system; however, that depends heavily on the needs of the city.

Chalk up another company dialed into the diversity strategy; Xerox has come a long way since “PC Load Letter.”