YouTube: The most democratic video platform ever. Make a great video, and they will come, or so the theory goes. In practice, there’s more to it than that. 300 hours of footage are uploaded to the site every minute, and in order to be visible, you need one (or all) of three things: money, time, creativity. I’ve got the second two–mostly the second one–so I sat down and went through YouTube’s new Creator Academy. It features lessons and courses like “building an audience” and “boosting your watch time.”

Creator Academy is more than your typical “how-to” series–it’s a series of lesson plans delivered by prominent YouTubers like iJustine, Alba Garcia, and Dane Boedigheimer, the creator of AnnoyingOrange. They summarize each lesson in their own unique ways, trying to make the ideas stick. It’s far more compelling than your average MOOC (Massive Open Online Course), because like everything on YouTube, it’s stingy with your time, delivering short 2-10 minute videos with high production value. The lessons are then detailed further below the video, and you can test your knowledge retention at the end. Your progress is recorded, and new videos are added on a regular basis. 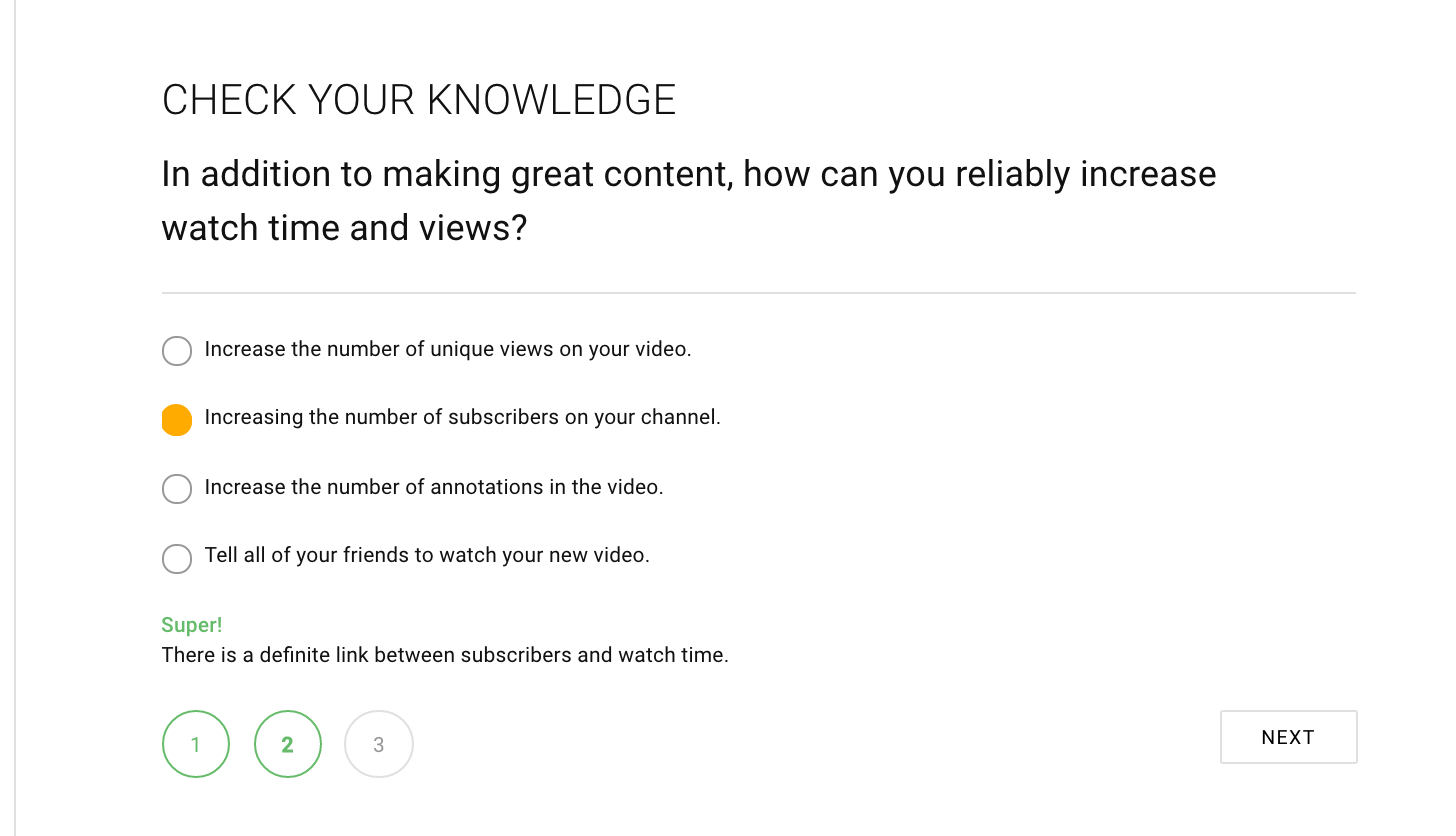 When you sign in to Creator Academy, they ask you for your name, the type of channel you run, and the three primary goals you have for your channel. I was already stumped at “Type Of Channel.” Am I comedy or commentary? Part of the benefit of the Academy is that they force you to ask these “no duh” questions that no one ever asks. Existential questions like, “WHAT AM I?!”

I went with comedy, and my three goals were “Build An Audience,” “Get More Viewers” and “Be Consistent.” I’ve managed to have some videos break 10,000 views, but a lot of my videos languish in the obscurity of the low 100’s. I’ve gotten my production quality fairly high, and tried to improve my writing, but at my level, marketing a video is difficult.

Creator Academy had some good tips for bypassing this minefield though, and they aren’t focused entirely on the mysticism of SEO. Nothing makes me want to give up on my dreams like those three letters. Creator Academy has some SEO tips, like picking consistent keywords across videos to improve search, matching them to your title, and so on, but they also emphasize more intuitive strategies like refining your topic choice, video length, and delivery. They also suggest some trendy gimmicks like 360 video. Just one more way to stay ahead of the curve.

I’m a standup, so when I started my video blog I thought: “I just need to take my jokes, stories, and ideas, and try to make a point with them. People will love it!” An encouraging number of people did, but it was fairly inconsistent. The Academy taught me that having a good premise isn’t enough; you need a hook. Rather than telling people “why we all feel like we suck” and “why the sauna will change your life,” I needed to find trending stories and add my commentary. People typically share YouTube vlogs to make their point better. The more you can chime in on relevant trending topics, the more likely people are to stumble upon you. Saying something interesting isn’t enough.

It turns out that two metrics predict performance on YouTube: watch time and subscribers. That’s how you know you have an invested audience. You can increase both by shortening your video time: 3 minutes or less is magic, anything above 5 that isn’t on an established channel is doomed to low retention. 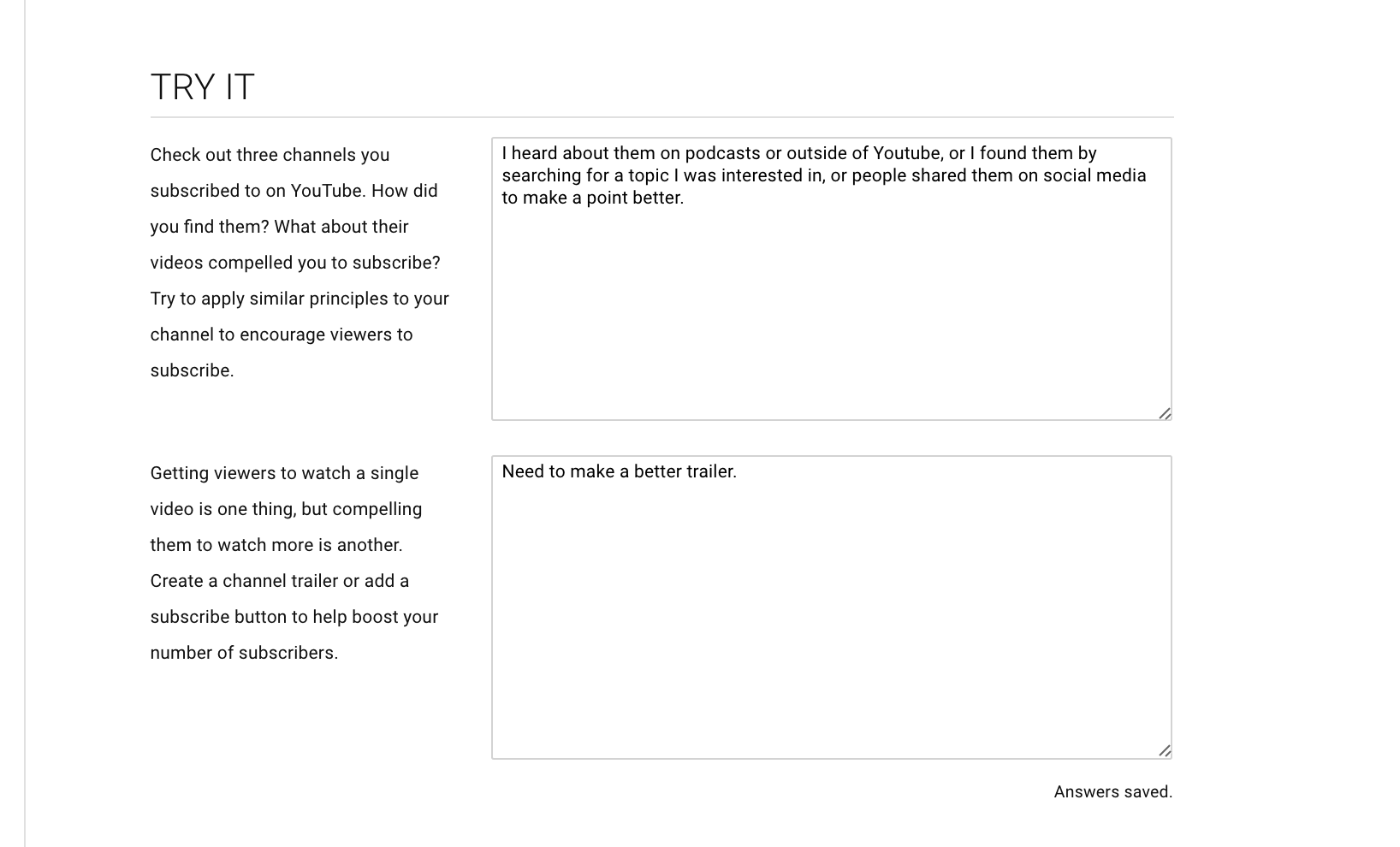 Creator Academy also advises sprucing up your channel by adding a trailer that includes clips of your videos. This trailer can also do double duty by serving as an advertisement video, if you decide to spend a few dollars to expand your reach.

Lastly, consistency. One video a month is a minimum, and one a week seems to be the winning balance.

Creator Academy forced me to communicate the essence of my channel. I see myself as an explainer and mediator between the major talking points on any issue. There’s always a fresh perspective that people are ignoring. I’ll have to find a way to communicate that message quickly, and match it to my visual elements if I want to build a brand. It also helps to make consistent choices in the look, pacing, and personality coming through.

So far, it hasn’t been an entirely tactical education, but philosophically and strategically, it does provide some pretty helpful perspective. If you’re looking to build some momentum with video, it might be worth a peek. YouTube’s Creator Academy is free to try, and available here. Happy ‘Tubin’.