Like many of my fellow millennials inundated with inaccurate memes, caught in an echo-chamber of headlines hollering clickbait conjecture, I consider myself a “well-informed” political junkie. I love the game and love to hate most of the players, and like any red-blooded American, I’m fired up about this election season. I mean, I’m not about to go punch a minority or anything, but I’m pretty excited.

Of course, I’m only able to stay informed, opinionated, and inflamed by keeping close tabs on what’s going on, who’s saying what, and which mini-scandals are of mega-importance each and every minute. Unfortunately, FiveThirtyEight ain’t cuttin’ it. Here are three of my favorite apps for the 2016 election – if you plan on voting, you might want to download these first.

Nonpartisan, unbiased, and as unsuited to meme-worthy mudslinging as it gets, PolitiFact has long been one of my favorite sources for getting the scoop on all outrageous claims made by politicians, supporters, detractors, and other representatives of the factually challenged.

For those unfamiliar with the site, which is run by the Tampa Bay Times, the concept is pretty simple: take statements made by pretty much anyone in the political realm, including Facebook activists, and evaluate them for accuracy. It’s a great way to fact-check opponents during debates and gut check family members during heated discussions, and now PolitiFact Mobile makes it even easier.

For just $1.99, your iOS or Android device gets you instant handheld access to the latest lies as soon as they’ve been PolitiFact-checked. If they ever made an app for relationship disputes we’d all be in trouble, but as long as they stick to politics they’re a life partner I’m happy to have dipping into my pockets. 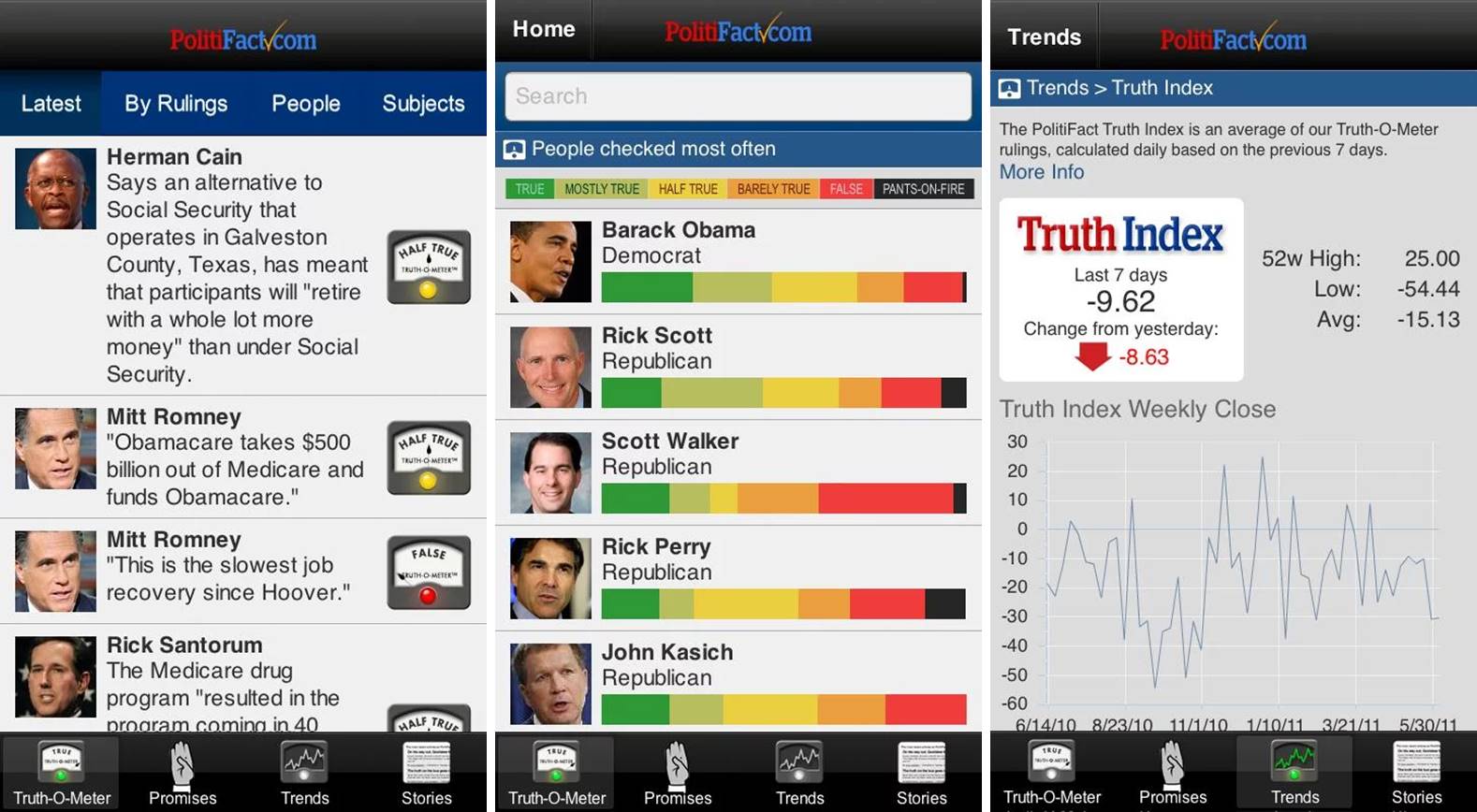 It’s a simple name and a simple app, but you can’t beat the price. 2016 Election App is a free news aggregator/schedule keeper/push notifier that will keep you up to date on all of the candidates, primaries, and debates.

There’s no amazing functionality and zero content accountability, but this app isn’t aiming for either. It lets you know when and where things are happening and what the results were. The app pulls new from a range of major sources that should provide a comprehensive perspective, depending on what you choose to read.

It offers significant access to information, works as easily with Android as it does with iOS, and when you aren’t looking at it you’ll hardly even know it’s there. It’s like the NSA without the whistle-blowing. 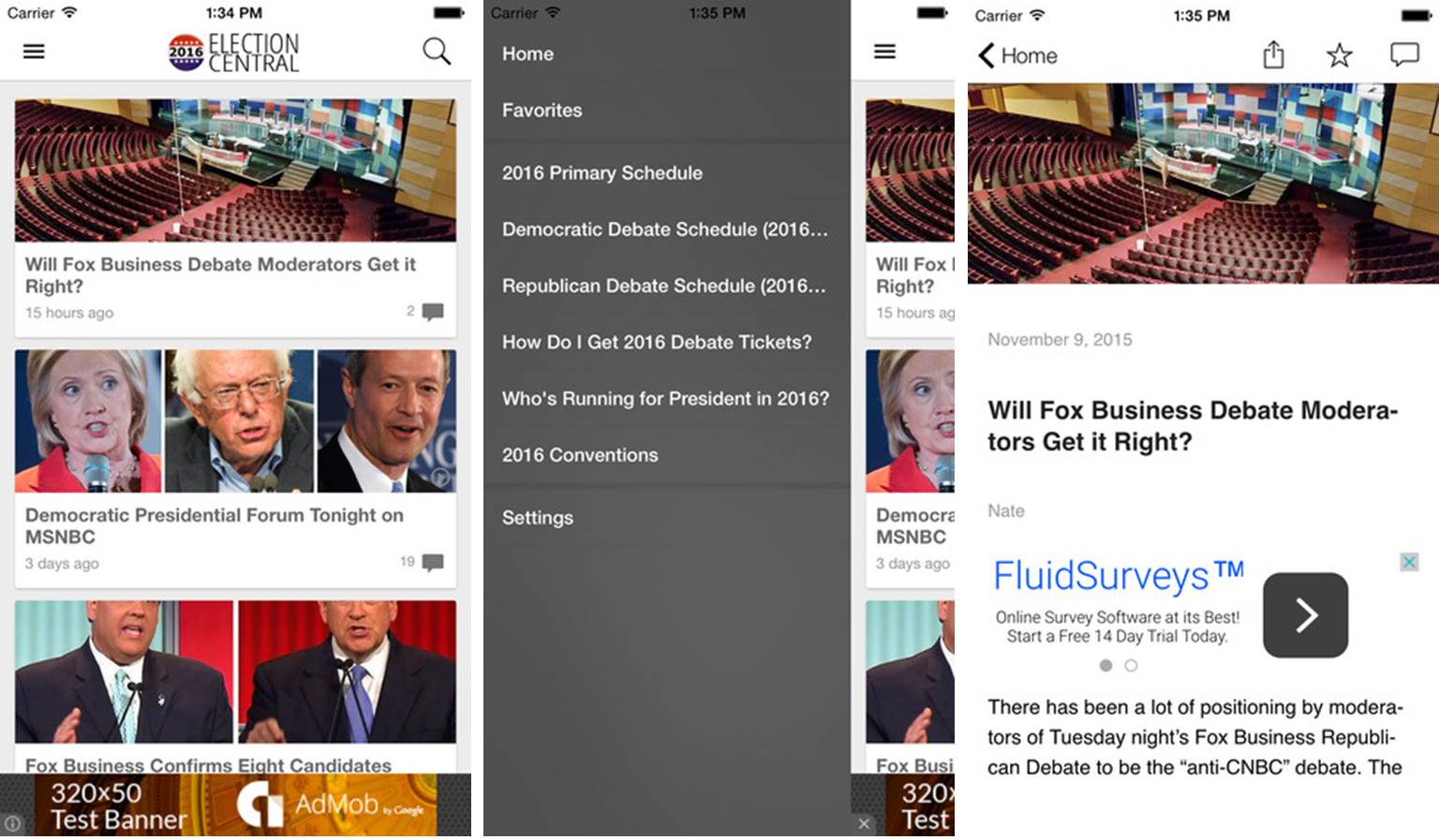 An app for the undecided, Voter – free, but available only for iOS devices – asks you a series of questions to match you to the candidates whose views are most aligned with yours. Can’t decide between Sanders and Trump (I’d honestly be fine with either – I just want to watch the world Bern)? Based on the issues you find important, and how you feel about those issues, this app will tell you which way you lean and for whom you should probably vote.

There have been some complaints of political bias in the questions asked, though for the most part these complaints seem to be coming from those who complain that reality has a political bias – there’s no helping willful ignorance. Then again, if you’re relying entirely on an app to tell you how to vote, you might be beyond help yourself. Still, it’s fun to play around, it’s a helpful perspective, and it might make you take a second look at your candidates of choice.

These three should be plenty to keep even the most ardent Tumblr user swimming in election info, insights, and micro-insults. There are plenty of other election-related apps out there. Got a favorite of your own? Let me know in the comments and we can debate its merits, then call each other fascists and leave with our egos and our clearly subjective opinions still in tact.