We aren’t a political news site, so the large list of failings of the current president, Donald Trump typically doesn’t merit our chronicling. That being said, after Trump’s travel ban on the seven Muslim-majority countries hit the news Saturday, major tech companies in Silicon Valley responded the very next day–and that certainly caught our eye. A lot of businesses and figures, like Apple CEO Tim Cook and Facebook founder Mark Zuckerberg, simply sent out tweets and memos giving very lovely and very safe denouncements of the ban, speaking in favor of multiculturalism and its value to the country. But several tech companies actually went out and legitimately took action to match their outrage. Here’s our list of tech companies who went out and did something.

Airbnb responded early on Saturday when CEO Brian Chesky took to Twitter. To compensate for people stranded at airports he declared that Airbnb is providing free housing to anyone not allowed in the US. In addition, Chesky has continued to drum up additional housing by asking American citizens to join Airbnb to provide refugee housing.

Airbnb is providing free housing to refugees and anyone not allowed in the US. Stayed tuned for more, contact me if urgent need for housing

Tony Xu, the founder, and CEO of DoorDash proceeded to tweet about his family’s history and his own as a refugee. After a series of tweets where he decried the ban and celebrated multiculturalism,  he revealed that his company would provide free food to any legal service providing support to refugees.

7/ @doordash is giving free food to any lawyers or advocates working this weekend to support immigrants, refugees. check @ebencuya for more

Lyft’s response came in on Sunday when co-founders John Zimmer and Logan Green revealed, through an e-mail to their users, that they would be donating $1 million to the American Civil Liberties Union (ACLU). 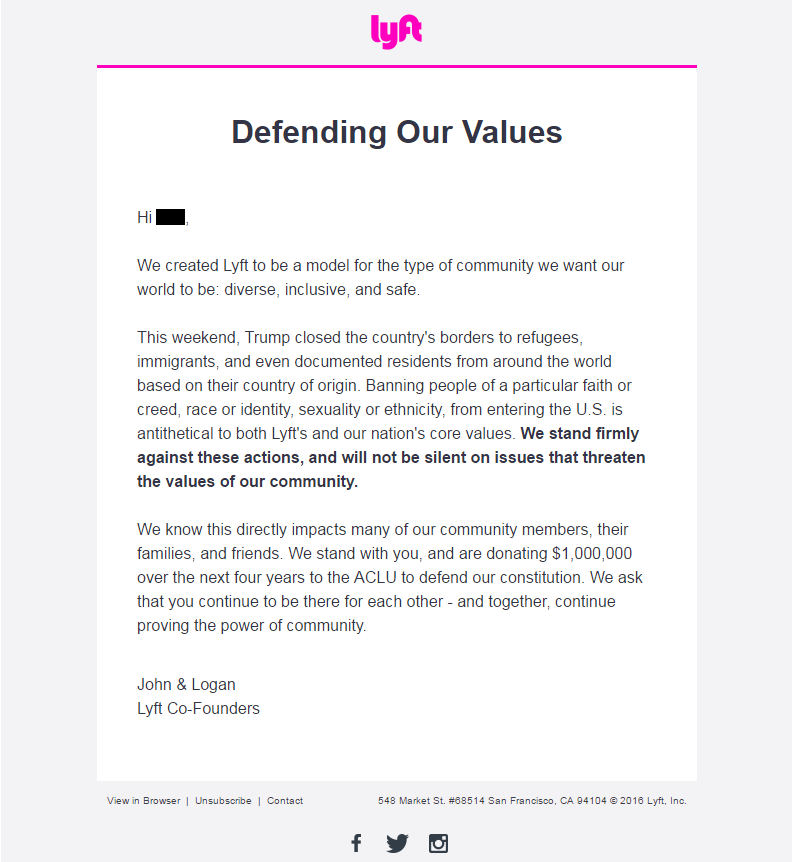 Viber addressed the problem directly but giving free calls from the United States to the seven banned countries on Monday without fanfare or much explanation beyond their tweet announcing it.

Uber went under fire during the JFK protest on Saturday by removing surcharges around the same time as the New York City Taxi Worker’s Alliance boycotted the airport in support. Following the wake of #deleteuber tweets that emerged after, the company vowed to create a $3 million defense fund for drivers who are affected by the ban.

Standing up for the driver community:Here's the email I'm sending to drivers affected by President's unjust…

Lastly, Google took the stage by recalling employees to the US as quickly as possible. After that, cofounder Sergey Brin was spotted at the San Franciso Airport protesting.

Rather than take a soft stance and simply publically object, Google announced that they would be donating $4 million to four select organizations: the ACLU, Immigrant Legal Resource Center (ILRC), International Rescue Committee (IRC) and the UN Refugee Agency (UNHR). The amount donated was accrued from both the company itself and employees therein.

As we go forward it’ll be interesting to see how these big tech companies respond to Trump’s drastic changes. The question is, will he lose more and more support from businesses as his plans take effect? Also, if we left out a tech company’s response to the Trump Muslim ban don’t forget to tell us in the comments.