Earlier this week we published an article about several Silicon Valley companies that don’t get as much air time as the Googles and Facebooks of the world but are still incredible places to work. While those companies offer attractive cultures and solid benefits, perhaps the sexiest selling point – for these and thousands of companies around the world – is super cool office space.

That’s the thing now: make your office look like a skate park or a pirate ship or a bat cave or a food truck or whatever and all of a sudden, people magically forget about the jobby stuff. There are a lot of very unique offices out there, but most of the stuff that allegedly makes it “cool” is “Office Cool”, not “Cool Cool”.

When my grandmother gets shitfaced and plays the tambourine at Hanukkah dinner, that’s “cool” as far as grandmothers and Hanukkah dinners go, but as far as the rest of the planet goes, it’s worth about five seconds of attention. When she does a Yiddish “Shake It Off”, maybe ten seconds, but you get my point.

I don’t care about giant desks, infinity whiteboards and crotch-dusted bean bags. I want stuff that’s cool no matter where you put it first, and then especially cool in an office second. If you really want to give people a cool place to work, you can start by setting up these seven things…

1. Mickey Rourke
Yes, the Mickey Rourke. He’d be your head of HR and he’d walk around saying things like, “What do you think you’re working on, big shot?” and “Don’t you bring that shit into my office unless you’re packing a shovel.” Literally everything that has ever been cool has involved Mickey Rourke in some way or another. The Six Degrees of Kevin Bacon? Please. Try The Infinite Cool Radius of Rourke. 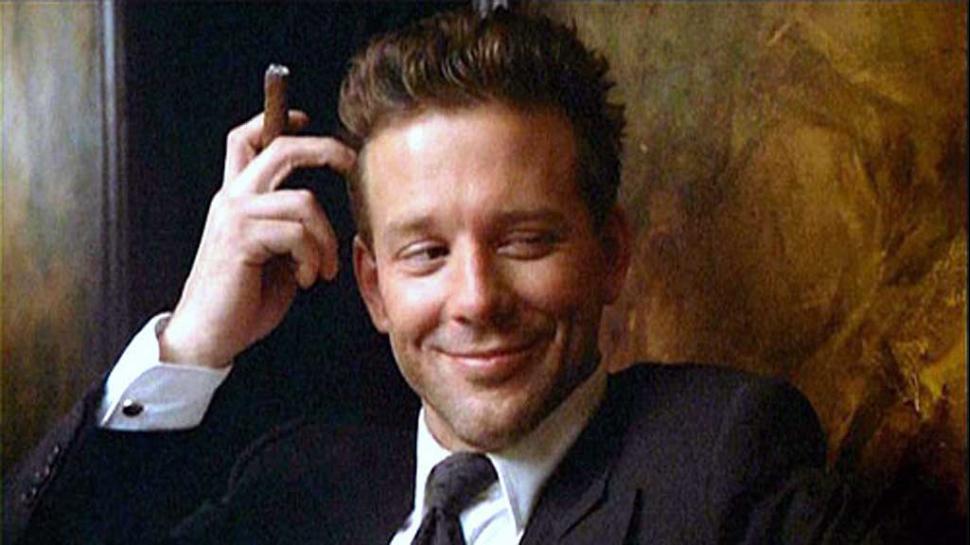 2. Smashy Smashy Room
Blah blah mindfulness bleeh blah meditation blah blah professional composure <fart noise>. If you’re human and you have a job, sometimes you just need to break shit to maintain your sanity. You might as well let your employees do it legally. Glassware is ideal but electronics, pretentious artwork and piñatas dressed like coworkers is also effective.

Who Has One: ? – but just this past summer a Toronto company called Battle Sports introduced the first “Rage Room” available to the public:

3. Bouncy Castle & Ball Pit
Of course both – the balls act as a moat around the inflated structure, except instead of protecting the castle the ball-pit moat is protecting you from crippling job depression. Whenever bouncy castles and ball pits make an appearance, every kid in the room goes crazy, and every adult in the room wishes it was ok to tell a kid, “Fuck off, it’s my turn.” This is a no-brainer.

Who Has One: Pearlfisher, NYC (Ball Pit), ? (Bouncy Castle)

4. Fireman’s Pole
Companies like Redbull (UK) and Corus Entertainment (Canada) have slides in their offices. Office slides are dumb. They never have a pool at the bottom and they take forever to convert into a stripper’s pole. And that’s critical because not every office has two floors, and that’s what real firemen do on their off-days. The bottom of fireman’s poles is also another great place for a ball pit. Or a giant bowl of queso.

Who Has One: Missing Link (Johannnesburg) – they also have a treehouse and a tattoo parlour 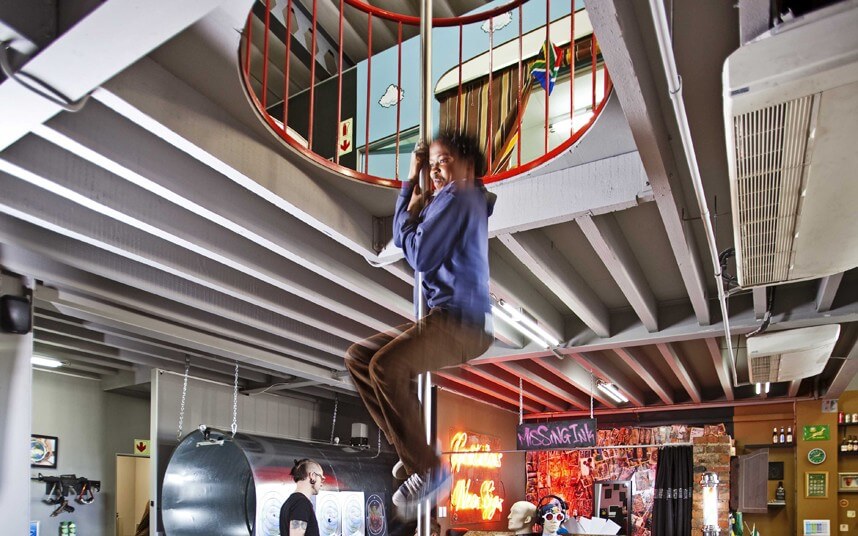 5. Barber Shop / Nail Salon
For men, few things are more relaxing and emotionally fulfilling than being reminded that some of their hair is still growing, followed by an old man holding a blade to their throat and instead of killing them, making them look like Paul Newman. For women, a trip to the nail salon is invigorating, confidence-inspiring and a perfect opportunity to relieve themselves of juicy gossip they swore they’d never share with anyone who speaks English. If there has ever been a perfect on-site perk, it’s this one. Plus, everyone knows that “Gross Co-Workers” is the third biggest productivity killer after heart disease and idiots.

6. Bartender
Not some hipster-log-cabin cafeteria with a drawer of Clif Bars and not some smarmy barista named, “June”. A straight-up bartender who knows how to make every cocktail in the universe and has a tattoo on their throat that reads, “My other neck is a flask”. You want a cool work environment with solid work-life integration? Give your employees what they really want after/during/before a long day of pretending to be important: a cold drink from a cool cat.

Who Has One: Warner Music, UK 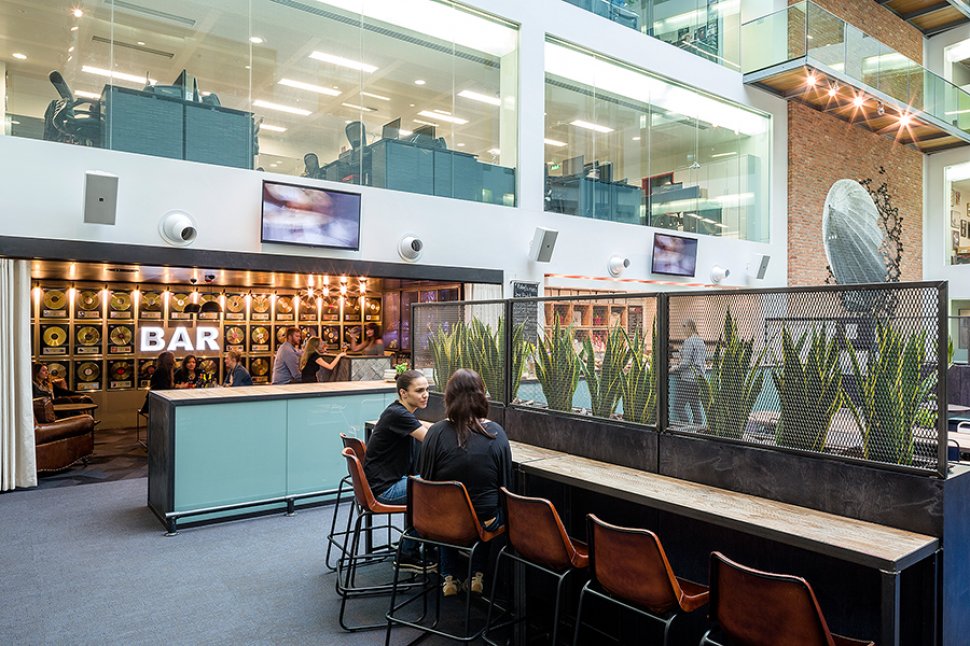 7. Conjugal Visit Suites
Let me get this straight: people who commit heinous crimes get cozy little rooms down the hall from their offices strictly for boinking, but the honest, hard-working professionals who are currently weaving the very fabric of our future have to hang around work until 9:30pm just so they can fuck on their boss’s desk? Clearly there has been a massive oversight. There should be several hotel-quality rooms on campus fully equipped with heart-shaped Jacuzzi and optional black-lighting. Room bookings would be fully integrated with Outlook / Google calendars and a very reasonable $10 cleaning fee would apply to each 30 minute reservation (obviously every tenth visit is free). 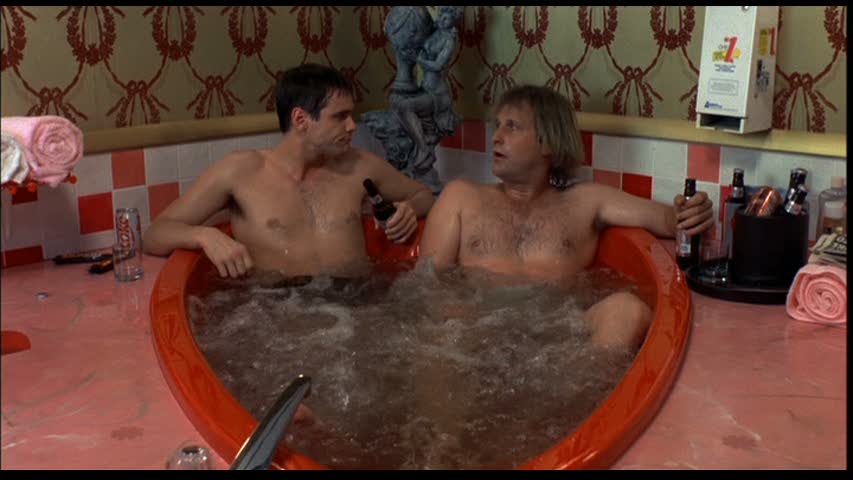