Now that it’s getting colder out, smoking breaks are becoming a bit less pleasant for workers across the globe. Plus, it’s 2016; do we really have to make someone go all the way outside to enjoy a healthy haul of a cigarette? Hishinetsu Industry—products sold via Ryonetsu—doesn’t think so. That’s why they are offering a prefab smoking room designed to fit in virtually any office cubicle. In theory, this will help boost productivity by shortening the time required to execute an entire smoke break, and perhaps avoid slower typing as a result of frigid fingers?

The smoking box is 603mm x 603mm x 2307mm and weighs about 160lbs.  It’s made of a steel body covered by gypsum board and non-combustible wallpaper. To help keep the air clean, there is a dust collection and deodorizing filter. The deodorizing filter is a BLUEbeamer photocatalyst hybrid filter. In other words, the smoke is supposed to go straight up, get immediately sucked in and filtered out from the air.

Based on testimonials on the company website, the biggest selling point is the fact the device requires minimal assembly effort and is easily activated by plugging it into a standard wall outlet when finished; apparently anyone can just throw one of these together and have it running in no time. 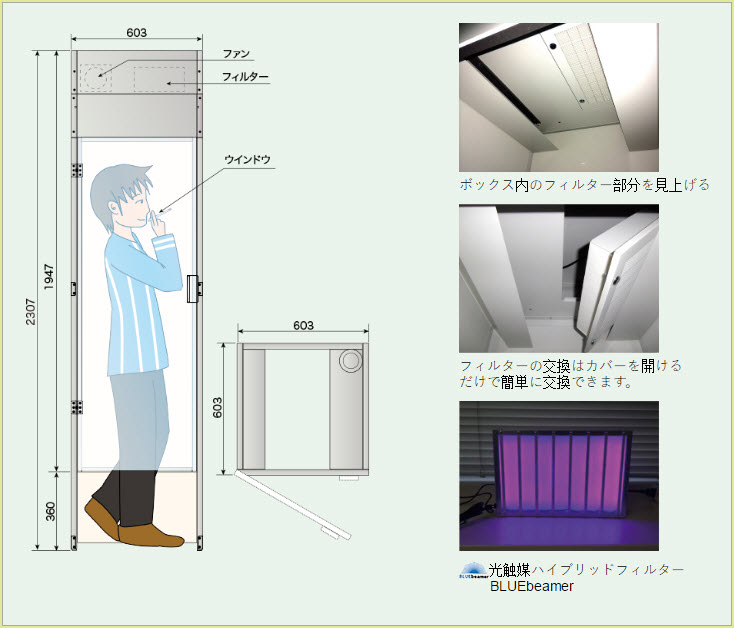 To anyone who has been to Japan, or has read up on their smoking culture, this kind of thing is probably more humorous than it is surprising. If you walk around Tokyo, especially its wealthier areas, you’ll find a number of designated smoking booths, outside of which you will be fined for smoking. 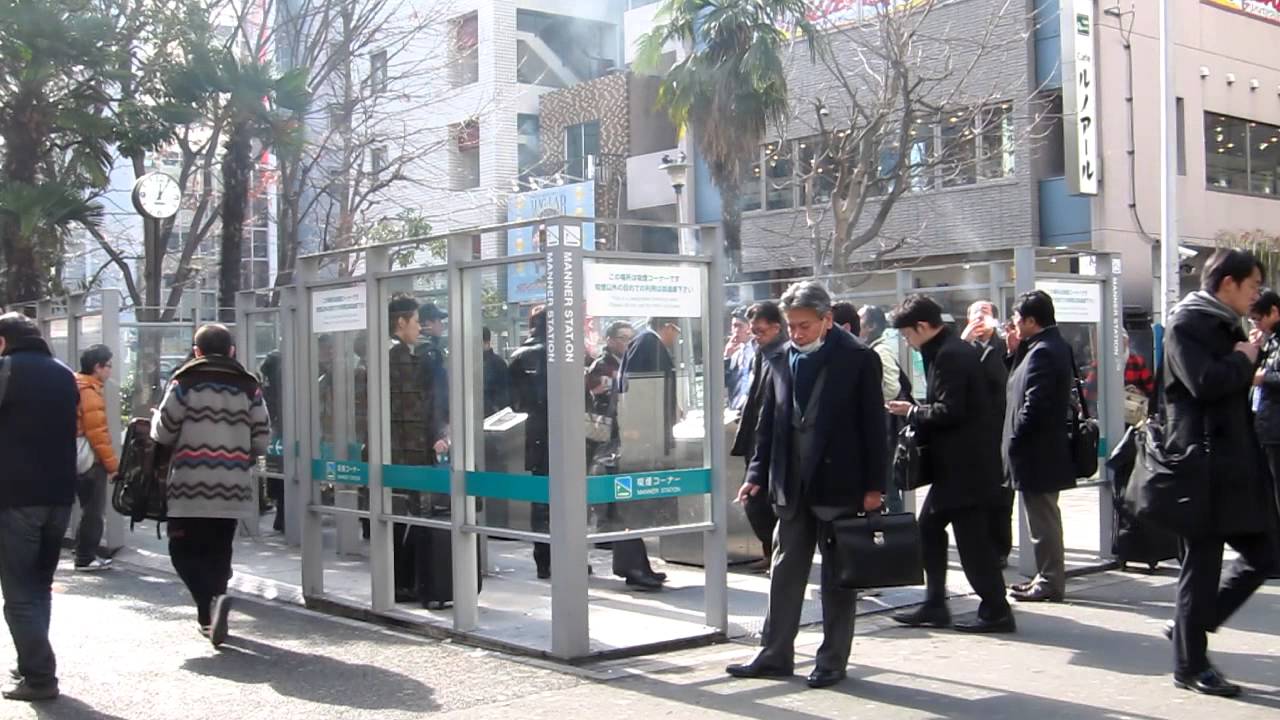 The concept of the “Prefabricated separation of smoking areas equipment” (how Google Translate has translated the product name) is not entirely new. It’s pretty much the same, except, you know, right in the middle of an office, next to where you keep the markers and tape and other stuff that will probably give you cancer if you ingest it. 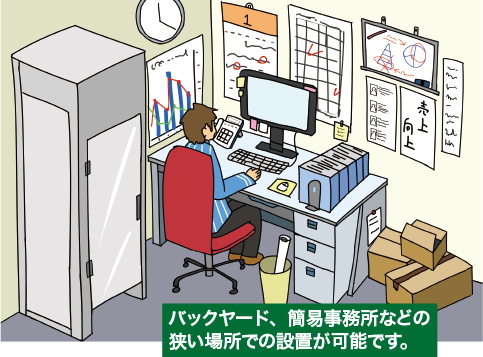 The booth is currently priced at $2,100, which perhaps renders it practical for only the most dedicated of smokers (and office places dedicated to the comfort of their smokers)—though it is much cheaper than a more “fixed,” construction-heavy solution. Ryonetsu is hoping to sell one million units within two years.

If You’re Already In The Office, May As Well Vape Your Phone

While we’re on the subject, for those of you just itching for a more innovative and convenient way to get your tobacco fix, there’s now Jupiter, a cell phone with a built in vaporizer. Engineered to burn safely (unlike the Galaxy Note 7), Jupiter Io4 is said to be built with the safest and most advanced vaping technology on the market. Oh, and with 4G LTE cellular support, and a built-in app to track usage and streamline ordering more supplies.

At 141mm (L) x 73mm (W) x 11mm (H) / 5.55″ (L) x 2.87″ (W) x 0.43″ (H), Jupiter Io4 is sized just like a standard phone. Rather than relying on vials which are easy to break and spill, Jupiter’s vaping technology is powered by the Vaporcade Shuttle, which docks to the phone. The shuttle contents are said to be flavored like a rich earthy beverage (mmmmmmm). The shuttle units themselves don’t suffer spillage and are maintenance free. Each shuttle contains 3.5ml of e-liquid and 14mg/ml of nicotine. Each carton (selling for $14.99) contains five shuttles. 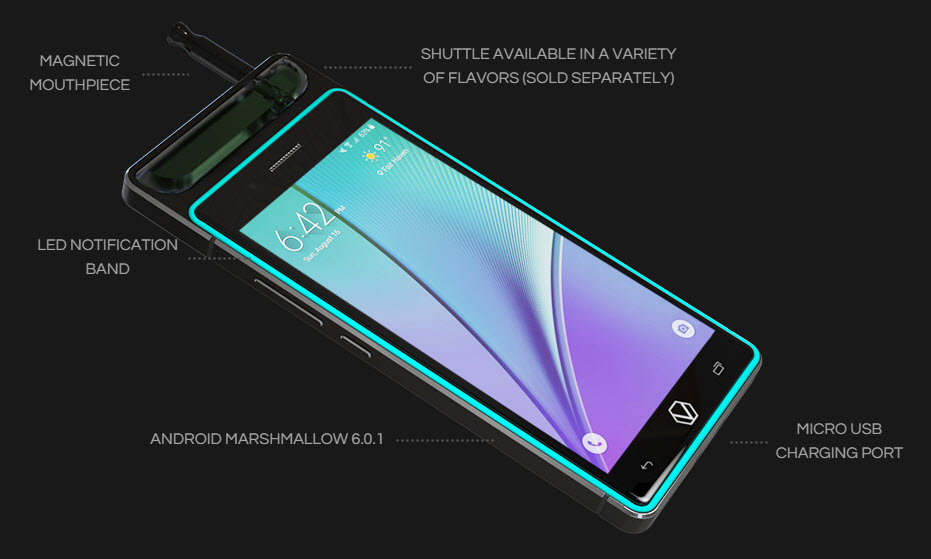 The phone runs Android 6.0 Marshmallow, has a 13MP primary and 5MP secondary camera, supports 1080p video playback, and features a 1.5GHZ CPU along with a 350MHZ GPU. For connectivity there’s built-in Bluetooth, Wi-Fi 802.11 b/g/n, and a FM radio. To keep the device juiced up, there’s a 3200 mAh battery.

Jupiter IO4 is priced at $399.00 for an unlocked device and has an estimated shipping date of November 2016. Each purchase includes a Breathing Box that supports phone charging, and contains a phone, hex wall charger, USB cord, and Halo Rings™ wireless earbuds. And you thought babies were the only ones that liked putting phones in their mouths.