From Ferguson to Making a Murderer to perennial problems with the NYPD (and the LAPD, the Seattle PD…), law enforcement and our criminal justice system have hardly ever been more under fire — metaphorically — than they are now. Thanks to the Internet, accusations of abuses of power, racial discrimination, and a disregard for human life have plagued individual officers and whole departments like never before.

It’s the flipside to the growing surveillance under which we’ve all been placed in the new technological and political regime. The NSA gets secret email intercepts and cell phone drop-ins, and we get to record cops being abusive and put the videos on YouTube.

Technology is changing the way law enforcement does their job and the way we interact with officers, with both good and bad results – which are which depends on whom you ask. A few startups are pushing the limits when it comes to technology and the law, leading us into a brave new world that might mean more accountable cops, more efficient use of resources, and…computer-assisted arrests?

Makers of the Mag Cam, a camera designed to fit onto the magazines of holstered weapons, Eman Security promises to provide a bullseye view of every bullet that leaves the chamber of a police officer’s weapon.

Citing the poor angles and frequent malfunctions of body cams and the selective nature of witness-taken cell phone videos in many recent high-profile police shootings, this startup is adding value by giving a clear shot of every shot fired. Was there an immediate threat? Were the shots wild? Did Han fire first? The Mag Cam can answer all of these questions, and may soon by on law enforcement weapons everywhere.

Three Harvard classmates with some law enforcement connections decided that police paperwork needed modernizing. After some work with police officers, department managers, and tech types, the Cobalt platform was born.

The platform is said to simplify the procedural paperwork cops have to file for everything they do (saving hours a day) but the real innovation is the added analytical power that this cloud-based, digital record-generating and -keeping system provides. Data trends can be easily spotted, evidence becomes easier to manage and harder to lose, and connections can be drawn that might have otherwise been missed.

Cops can do their jobs better and faster, and it’s harder to hide the paper trail if any misconduct occurs. That sounds like a win-win to me. 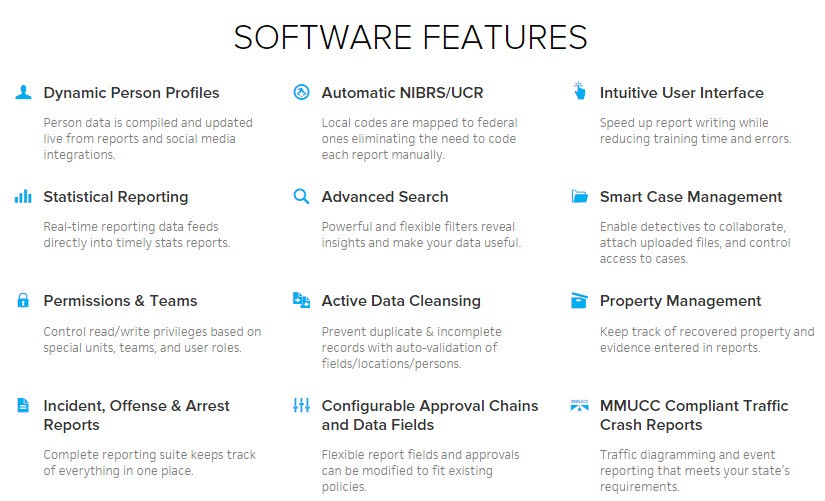 Similar to Mark43’s Cobalt platform, SPIDR Tech’s main product is a cloud-based record-keeping system for police departments and other law enforcement agencies. The emphasis here is on data mining power, not just making it easier for the bean counters to get the paperwork they need from those darn rogue cops.

The idea is that using aggregate data, cops can be where they’re needed before the crime happens. Measuring individual officer and precinct effectiveness becomes easier as hundreds of metrics can be continually tracked and assessed in seconds. Public reactions to police actions can be used to tailor law enforcement efforts to better meet community needs.

Take all the promise that Big Data holds (held?) for business, and imagine the same fervor applied towards the law enforcement realm. That’s the promise of SPIDR Tech. 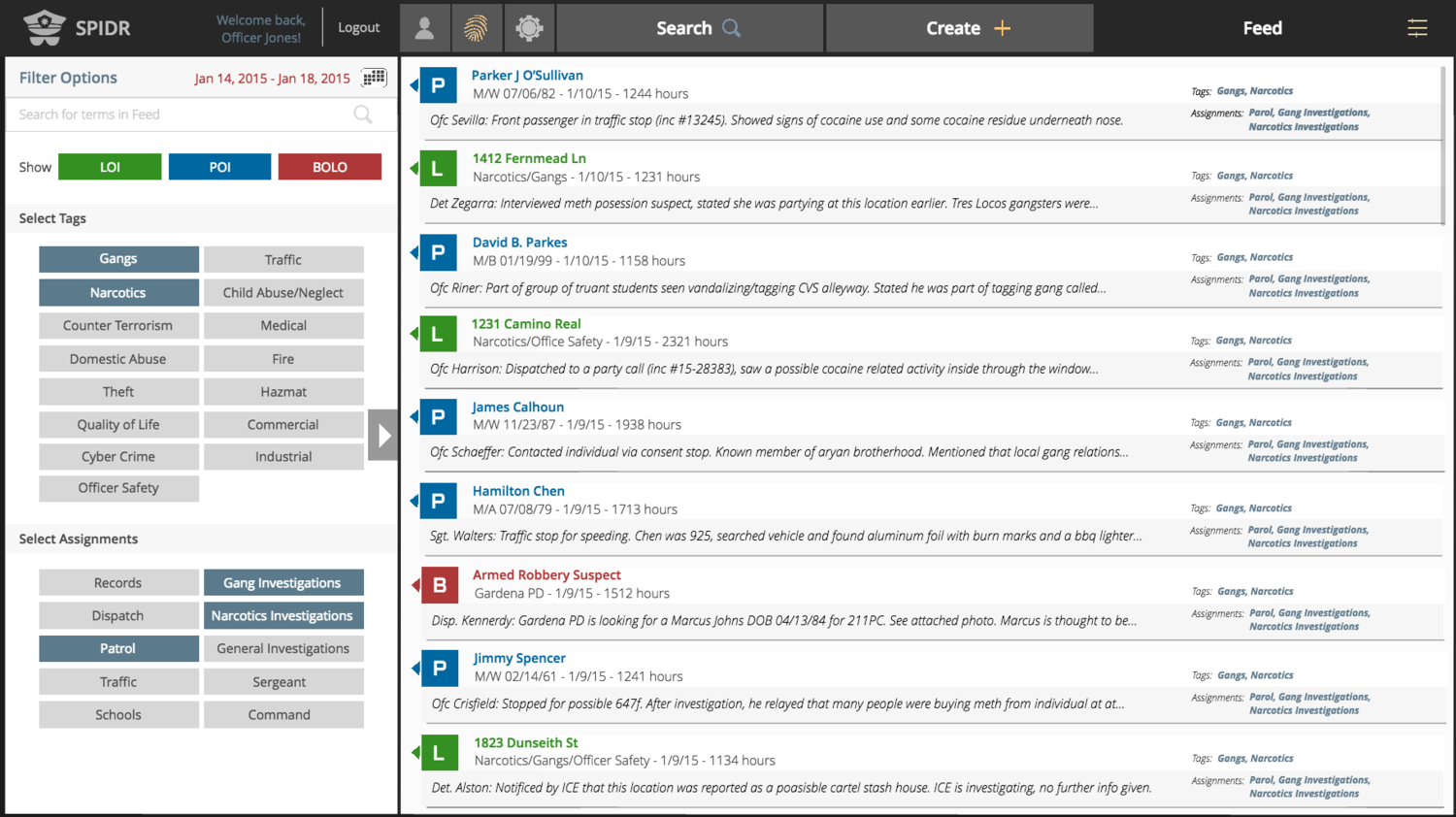 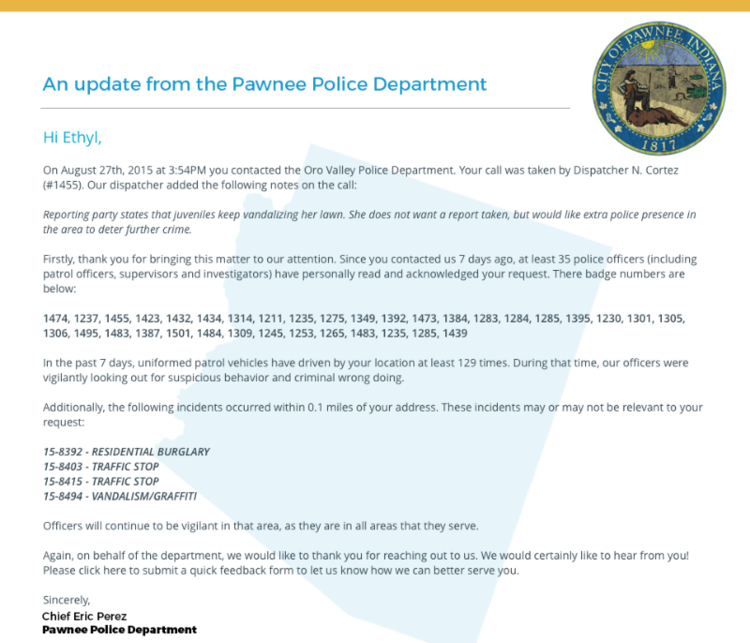 StreetCred is SPIDR Tech on steroids (and possibly some other drugs). The several software tools this startup has rolled out include technology to examine individual officer behaviors and performance before they become a national headline, find escaped fugitives with greater ease using predictive analysis, and even predict when and where crimes may occur, and even who may commit them?

That’s not something StreetCred comes right out and says they can offer, but there are plenty of hints that they’re working towards it. And that’s where we come full circle to the potential problems these law enforcement tools create when it comes to our basic liberty.

A world where the prediction of future criminality affects our opportunities and even our freedom before we have acted criminally isn’t too difficult to imagine (Phillip K. Dick already did) – just as the ability for the government to listen in on all of our phone calls was a frequently-imagined conspiracy theory before we learned it was actually true. That’s more than a little scary, and more than merely an issue of transparency; it’s data gone tyrannical, and something against which we should be guarding.

I just hope we have the tools – or the whistleblowers – to know when it’s happening.